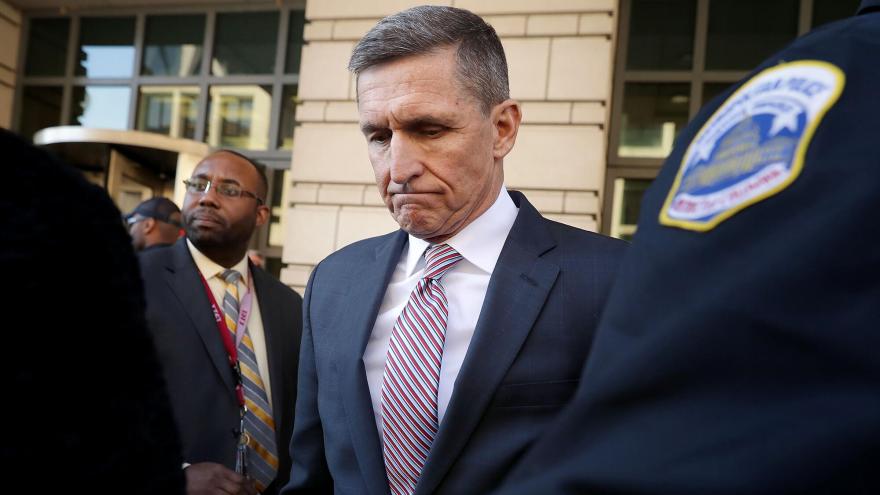 President Trump has tweeted that he has “granted a Full Pardon” to former National Security Adviser Michael Flynn. In this image, Flynn leaves the Prettyman Federal Courthouse following a sentencing hearing in U.S. District Court December 18, 2018 in Washington, DC.

(CNN) -- President Donald Trump announced in a tweet Wednesday that he has granted his first national security adviser, Michael Flynn, a "full pardon," wiping away the guilty plea of the intelligence official, lobbyist and conservative fringe darling for lying to the FBI.

The pardon, coming as Trump enters his last days as President, bookends his four years in office and his supporters' revisionist take on the investigation into Russian interference in the 2016 presidential election. Since January 2017, the Flynn case has been among the defining scandals and sagas of Trump's presidency and Attorney General William Barr's leadership of the Justice Department.

Flynn's criminal charge had hung over the Trump presidency and shaded nearly every major scandal Trump faced, because Flynn's lies to the FBI had occurred days into the new administration and were about his transition-time contacts with Russia, which opened the door for warmer relations with a country that had just meddled in the US presidential election.

The pardon also ends a three-year legal saga where, most recently, Flynn's charge hung in an appeals court in a fight over separation of powers, while the Justice Department was trying to drop the case. The trial-court judge overseeing the case had not taken action since the appeals fight, and was considering whether to dismiss the case or to sentence Flynn. The Justice Department has said Flynn never should have been investigated by the FBI and that his lies to them in January 2017 were immaterial, while Flynn recanted his admissions of guilt.

The White House, in a statement following the President's announcement, insisted on Flynn's innocence, with press secretary Kayleigh McEnany saying in part: "The President has pardoned General Flynn because he should never have been prosecuted."

The pardon brings "to an end the relentless, partisan pursuit of an innocent man," McEnany wrote. The White House did not provide any evidence of Flynn's innocence in the statement.

Trump said in March that he was "strongly considering" pardoning Flynn and had told aides in recent days that he planned to pardon him before leaving office.

A Justice Department official said on Wednesday that they were not consulted about a pardon and instead were notified in advance of the President exercising his pardon power for Flynn. The Department would have preferred to have seen the case resolved with a dismissal in court, the official added.

The judge in Flynn's case, Emmet Sullivan of the US District Court in DC, may also have questions left in the case, as could the next Justice Department in the Biden administration. In addition to pleading guilty to one charge, Flynn admitted to lying about his lobbying for Turkey but was not charged with that crime. During the legal proceedings, Sullivan has also asked probing questions about the lawyering around the case, and it is unclear if the judge will attempt to continue his inquiries.

The pardon is likely to play into Trump's legacy, as he continues to rail against democratic institutions and had used Flynn as a political symbol to rally his supporters. Trump's critics have claimed for months the administration has abused its power and undermine the rule of law to help former advisers and friends.

Flynn's pardon is the second presidential act of clemency related to prosecutions of advisers of the President. The first was Roger Stone.

"It is my Great Honor to announce that General Michael T. Flynn has been granted a Full Pardon. Congratulations to [Flynn] and his wonderful family, I know you will now have a truly fantastic Thanksgiving!" Trump's tweet on Wednesday afternoon said.

Flynn, apparently in response, tweeted a reference to a Bible verse from the Book of Jeremiah: " 'They will fight against you but will not overcome you, for I am with you and will rescue you,' declares the Lord."

Over the past two years, the retired lieutenant general twice appeared before federal judges and admitted, under oath, that he was guilty of lying to the FBI while serving as national security adviser when they asked him about his calls in December 2016 with the then-Russian ambassador. But in recent months, Flynn claimed his innocence, saying he had been duped and positioning himself as a right-wing martyr in Trump's fight against "deep state" Obama-era leaders and intelligence officials.

The Justice Department never admitted that much. Instead, the department added fuel in recent months to Flynn's and Trump's claims that he had been wrongfully investigated and tried to dismiss his charge. Former prosecutors and law enforcement officials widely criticized that legal approach, calling Barr a politically corrupt lackey of Trump's atop the Justice Department.

The Flynn matter from the beginning has raised questions about Trump's apparent appeasement of Russia.

After the election in late 2016, Flynn spoke to then-Russian Ambassador Sergey Kislyak on the phone several times, requesting that Russia "reciprocate moderately" to US sanctions for its interference in the election and to oppose the Obama administration in an upcoming United Nations vote. He had discussed the calls with Trump transition officials, special counsel Robert Mueller found, and admitted to not documenting the discussions because they could have been perceived as Trump's transition team getting in the way of the Obama administration's foreign policy.

"Let's keep this at even-kill (sic) level; then when we come in, we will have a better conversation where we are going to go regarding our relationship," Flynn told Kislyak on December 29, 2016, according to transcripts of the calls released by the Trump administration this year.

When FBI agents asked Flynn about the calls in the West Wing in January 2017, Flynn falsely said he had not made the requests of Russia.

In his guilty plea, Flynn also admitted to not telling the Justice Department, which regulates foreign agents in the US, about lobbying for Turkey in 2016. He was not charged with this crime, though the department made clear previously that he could have been.

The aftermath of the Flynn calls with Kislyak, including Trump's encouragement of then-FBI Director James Comey to go easy on Flynn, contributed to the eventual appointment of Mueller as special counsel, a development that has fueled Trump's anger for years.

Mueller ultimately found Russia sought to help Trump win in 2016 by leaking stolen Democratic documents, that the Trump political operation embraced those leaks and that Trump repeatedly attempted to thwart the Russia investigation once he became President.

Flynn's departure from the White House in 2017, days after the FBI interview, came not just because of his lies to the agents. He also lied about his contacts with Kislyak to senior administration officials, including Vice President Mike Pence. Senior national security officials at the time believed the lies opened up the possibility Russia could blackmail Flynn.

"I had to fire General Flynn because he lied to the Vice President and the FBI," Trump tweeted in December 2017. "He has pled guilty to those lies. It is a shame because his actions during the transition were lawful. There was nothing to hide!"

Flynn cut a deal with Mueller's team to cooperate in late 2017, early in that investigation. With that step, he potentially avoided more serious criminal charges, and spent hours with investigators sharing details about the Trump campaign's and transition's contacts with Russians as well as Trump's actions to potentially obstruct the Russia investigation in 2017.

But as his case swerved toward a possible brief prison sentence, Flynn fired his lawyers, replacing them with a defense team that worked to unravel his plea in court and publicly campaigned for the pardon.

Ultimately, Flynn scored the pardon after his team attacked the FBI, Mueller prosecutors and his prior defense team in court -- even after a federal judge had rejected the theory of Flynn's team that the FBI had entrapped him. Trump had also folded regular tweets about Flynn into his continued railings about Comey, the FBI, the courts and "Obamagate," a vague moniker of right-wing conspiracy theory.

Flynn's lawyers in April had filed hundreds of pages of arguments in court encouraging further investigation of officials. They had made public, for instance, a handwritten note from a top FBI official in 2017 that suggested if Flynn didn't admit to a crime of improperly negotiating with Russia during the transition and lied to the FBI instead, the Justice Department could prosecute or "get him fired." Though not a legally improper approach, the FBI official's blunt planning helped draw additional attention to Flynn's case, as did findings by other investigators that the FBI had made missteps in its initial handling of the Russia investigation.

The Justice Department subsequently sent several more internal documents without context to Flynn's team, allowing the private lawyers to make them public and draw attention to their case. Some have mentioned Joe Biden, though Barr has publicly announced Biden isn't being investigated.

Sullivan held a hearing in September regarding the case, and was still considering those documents. At the hearing, he asked Flynn's attorney Sidney Powell about how much she spoke with the President about the case. She responded they had spoken but she had asked Trump not to pardon Flynn.

In public, both she and Trump had said they wanted the legal system to clear Flynn's name. But that seemed to grow more unlikely with Trump's loss of the presidency.

In recent weeks, Powell has been one of the more outspoken advocates for Trump's conspiracy theories of election fraud, which have been repeatedly rejected by judges. Though the Trump campaign has distanced itself from Powell, Trump has tweeted about her assistance to him in fighting his election loss, and his attorneys Rudy Giuliani and Jenna Ellis posed in a picture with Flynn that Ellis posted online. Powell also spoke at a news conference alongside Giuliani a week ago, vowing to fight for Trump.

Trump's approach to Flynn's case clearly shifted as well over the three years since his plea.

"What happened to General Michael Flynn, a war hero, should never be allowed to happen to a citizen of the United States again!" Trump tweeted this April. Pence in late April also said that he now felt more inclined to believe Flynn hadn't intentionally lied to him.

House Intelligence Chairman Adam Schiff, meanwhile, said in a statement that the President "abused the pardon power to reward Michael Flynn, who chose loyalty to Trump over loyalty to his country."

"There is no doubt that a president has broad power to confer pardons, but when they are deployed to insulate himself, his family, and his associates from criminal investigation, it is a corruption of the Framer's intent," the California Democrat said, adding, "It's no surprise that Trump would go out just as he came in -- crooked to the end."

He added later on CNN that Trump's pardon of Flynn is a "body blow to our national security. It's also a body blow to the rule of law and, I think, makes a mockery of our democracy to those watching from around the world."

House Speaker Nancy Pelosi, also a California Democrat, called the pardon an "act of grave corruption and a brazen abuse of power."

While the President has continued to falsely insist publicly that he won the presidential election rather than Biden, the pardon of Flynn is a sign Trump understands his time in office is coming to a close. He's expected to issue a string of additional pardons before leaving the White House, according to multiple sources familiar with the discussion.