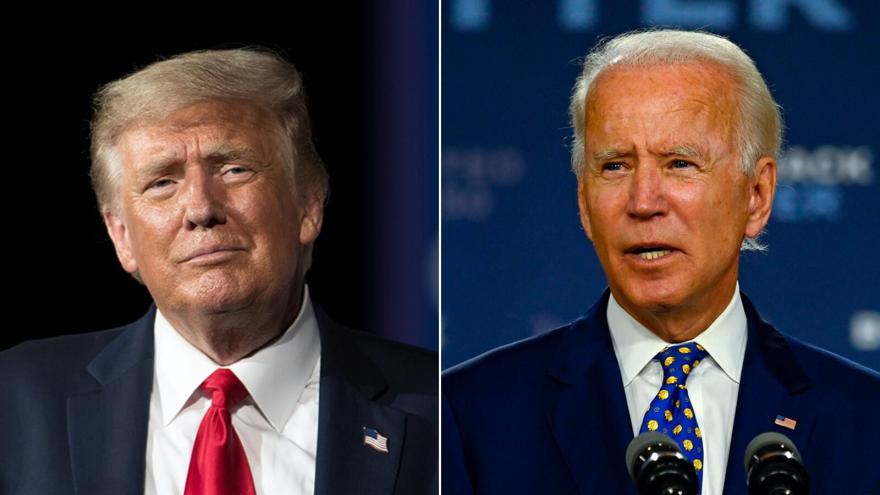 As Trump and Biden enter a key weekend of preparation for their showdown in Cleveland on Tuesday, both campaigns have been quiet about how the candidates are preparing.

Trump, according to a source familiar with his debate preparations, is studying expected attacks from Biden. The focus of the preparations are a series of notecards the President is reviewing -- the front lays out an expected Biden attack while the back of the card has bullets of what Trump has done on the topic, what he will do in a second term and how to turn the attack back on the former vice president. Christie, who played Clinton in Trump's 2016 debate, is also helping with Trump's debate preparations, the source added.

The first debate will be 90 minutes and focus on six topics: "The Trump and Biden Records," "The Supreme Court," "Covid-19," "The Economy," "Race and Violence in our Cities" and "The Integrity of the Election." It will be moderated by Fox News' Chris Wallace.

The Biden campaign's concern -- and expectation -- is that Trump will be unpredictable on stage, persistently making false claims. His campaign does not believe it's wise, or even possible, for Biden to attempt to fact-check every Trump falsehood in real time, instead leaving some of that responsibility to the moderator.

"Our hope is that (moderator Chris Wallace of Fox News) will hold Donald Trump accountable for things that he says that are simply lies and mistruths, but that'll be up to the moderator, and we'll see what he chooses to do," Biden deputy campaign manager Kate Bedingfield told reporters Thursday. "But I can tell you that Joe Biden will use the opportunity to talk directly to the American people about what he'll do as President."

One of the former vice president's overarching goals during the debate will be to do what he's done in recent months on the campaign trail: Focus on the major public health and economic challenges facing the country, and tie them to Trump's failures on managing the coronavirus pandemic.

Trump and his top aides have had a somewhat inconsistent message ahead of the first debate, especially when it comes to how they believe Biden will perform in the closely watched contest.

Trump and his team routinely lowered the bar of Biden's speaking ability ahead of his speech to the Democratic National Committee in August, so when Biden came out and delivered a coherent speech, the remarks looked more standout in the eyes of voters because of that poor expectation setting.

The same has happened in the lead up to the first debate.

Trump, during an event in Pennsylvania this month, tried to raise expectations for Biden, saying that the former vice president "should be able to beat me" in a debate because "he's much more experienced. Trump even said Biden was "great" at debating.

But keeping that messaging focused has been a struggle for Trump. Mere minutes after those comments, Trump went back to attacking Biden's verbal abilities and mental acuity, saying the former vice president is "shot" and "the worst presidential candidate in the history of politics" and "can't speak without the teleprompter."

Trump, in another sign he can't help degrading Biden even if it hurts the expectations around him, has also floated a totally unproven theory that the former vice president is able to do well in debates because he is on performance enhancing drugs.

Even Trump aides have admitted publicly that Republicans have previously lowered expectations too much for Biden.

"I think he's going to be much better than I think a lot of my Republican and fellow Trump supporters believe," top Trump aide Jason Miller told the Washington Post recently. "And so that's why I try to tell (Trump supporters), 'Hey, guys, don't go and set the bar so low for Joe Biden, because he's actually going to be pretty darn good.'"

There is a sense among Biden aides and top Democrats outside the campaign that little in a debate could fundamentally change the contours of what has been a remarkably stable race for months. Many point to how Clinton did well in her debates against Trump four years ago and still went on to lose the election.

The reason the debate is unlikely to change the race's trajectory, said top Democrats, is that Trump's handling of the pandemic is not going away and little that he or Biden can say on stage will reshape its realities.

"If debates matter, Joe Biden wouldn't be the Democratic nominee," said Jen Psaki, a White House communications director in the Obama-Biden White House. "It is an opportunity to speak directly to the American public. So, of course, it matters for that reason. But Joe Biden is not the nominee because of his debating prowess and clearly the Democratic electorate didn't think that mattered."

There are differences among veteran Democratic operatives and officials over how Biden should respond to Trump.

Psaki said that debating Trump is still "tricky," but that the best strategy for Biden is to "ignore Trump, play his own game and not be pulled into Trump's game."

"Ultimately, a successful debate is not about who has fact checked the person or cut down the other person," she said. "It may feel like that in the moment, but it is really about speaking directly to the people at home."

Other Democrats, though, said they'd like to see the former vice president deliver strong responses to Trump's attacks.

"I think the President will go on the attack and my advice is that every time the President attacks, Joe should answer back, should take his time initially to answer back and answer back tough, strong and in no uncertain terms and then pivot to his answer of what he would do," said former Pennsylvania Gov. Ed Rendell. "He should let no attack go unresponded to. Joe's strong, he's a fighter, so this should be a natural for him."

Tim Murtaugh, a top Trump campaign aide, told reporters this month that the President hopes to set himself apart from Biden by both highlighting his first years in office and using the same critiques that he does on the campaign trail.

"I think the way that he sets himself apart from Joe Biden is to talk about his record," he said "It'll be a very clear contrast, the same contrast that we have drawn throughout this campaign."

Trump and Biden's first debate Tuesday will look noticeably different from past matchups due to the coronavirus pandemic.

The audience size will be drastically smaller than prior presidential debates, Frank Fahrenkopf, co-chairman of the Commission on Presidential Debates, which is conducting the event, told CNN.

Normally, the average in-person audience is around 900 people, with up to as many as 1,200 depending on the venue, according to Fahrenkopf.

Fahrenkopf estimates 60 to 70 audience members will be seated at the Case Western Reserve University to watch Trump and Biden face off. Each candidate will get a fourth of the available seats for family and invited guests, with some seats allotted to university and Cleveland Clinic staff.

Another key change is how the campaigns won't be able to send in a group of supporters to try and convince the news media their candidate was the overwhelming winner.

Everyone attending the debate, including news media, will be tested for coronavirus.