Trump ally goes on trial for 'espionage lite' and obstruction 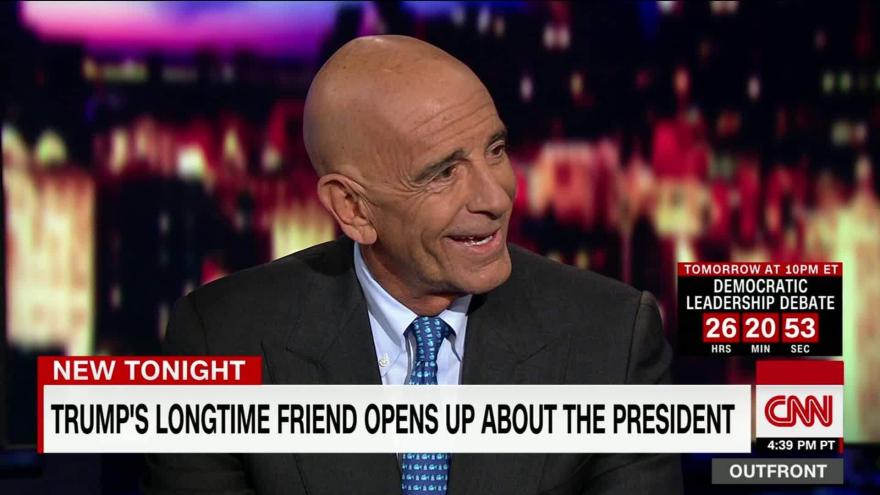 (CNN) -- Jury selection begins Monday in the trial of a former Donald Trump adviser whom authorities allege was involved in a two-year effort to try to influence the policy decisions of the Trump campaign and administration to benefit the United Arab Emirates.

Tom Barrack, a wealthy businessman who served as the chair of Trump's Presidential Inaugural Committee and an adviser to his campaign, was indicted last year along with his assistant Matthew Grimes and an Emirati official for allegedly acting as a secret backchannel for the Gulf nation.

Barrack and Grimes allegedly conspired to capitalize on Barrack's close relationship to Trump by promoting the UAE's interests through media interviews, advocating for a candidate preferred by the UAE to serve as US ambassador to the country, helping UAE officials in their dealings with the White House, and by pushing back against a proposed summit at Camp David to resolve a dispute involving Qatar and Gulf states. The summit never happened.

Barrack and Grimes have pleaded not guilty and deny any wrongdoing.

The Emirati, Rashid Al Malik, fled the US in April 2018, three days after he was interviewed by the FBI. He remains at large.

The trial is expected to challenge the US government's use of the foreign agent statute and comes as the Justice Department has ramped up its prosecution of undisclosed foreign lobbying and related activities.

Barrack and Grimes were charged with one count of conspiracy and one count of acting as foreign agents without notifying the Justice Department, under section 951 of the criminal code, which national security officials have called "espionage lite." They face a maximum of 10 years in prison, if convicted.

Barrack was also charged with obstructing the grand jury investigation and six counts of making false statements during an interview with the FBI in June 2019. The obstruction charge carries a maximum of 20 years in prison.

Barrack and Grimes' lawyers have argued prosecutors are trying to criminalize free speech and charged the men with a statute that is normally reserved for spies.

"Mr. Barrack was never an agent of the UAE, nor did he commit obstruction or make any false statements. There is no basis whatsoever for the charges against Mr. Barrack," his attorneys wrote in a court filing.

The foreign agent case could turn on whether prosecutors can establish that Barrack and Grimes had an "agreement" to act at the "direction or control" of UAE officials.

Lawyers for Barrack and Grimes, who was 22 years old at the time, said their clients never had an agreement to work for the UAE.

"Although Section 951 has existed in some form for more than a century, it has never before been used against a person in Mr. Grimes' position. Never. There is good reason for that. The statute, which targets spies and others engaged in criminal activity, does not apply to Mr. Grimes' alleged conduct" his attorneys wrote.

Two unidentified former White House officials could be called as witnesses by either the prosecution or defense teams, according to a court filing.

The prosecution case is expected to be based largely on numerous text messages and emails sent between the three men between 2016 and 2018. The trial is estimated to last four weeks.

The trial comes as Trump is back in the spotlight, potentially announcing a presidential run in 2024, and facing numerous criminal investigations. Trump has denied any wrongdoing.

According to the indictment, the alleged foreign agent scheme lasted from April 2016, during the presidential campaign, to April 2018, through Trump's first year in office.

Prosecutors allege that in 2016, Barrack and Grimes received talking points from UAE officials for Barrack's TV appearances in which he promoted the UAE's interests.

Following one appearance, Barrack emailed Al Malik, "I nailed it ... for the home team," referring not to the United States but to the UAE, according to the charges.

In another instance, prosecutors allege, in April 2017, Barrack told Al Malik that Barrack himself was under consideration by Trump to become either US ambassador to the UAE or special envoy to the Middle East. Barrack's appointment to either post "would give ABU DHABI more power!" he told Al Malik.

"This will be great for us," Al Malik replied. "And make you deliver more. Very effective operation." Barrack responded, "And great for u!" Barrack was never appointed to either post.

At the same time, prosecutors allege, Barrack obtained $374 million for his California investment firm from two Abu Dhabi sovereign wealth funds. An investment tracker credited the bulk of the investment to "Barrack Magic," according to the indictment.