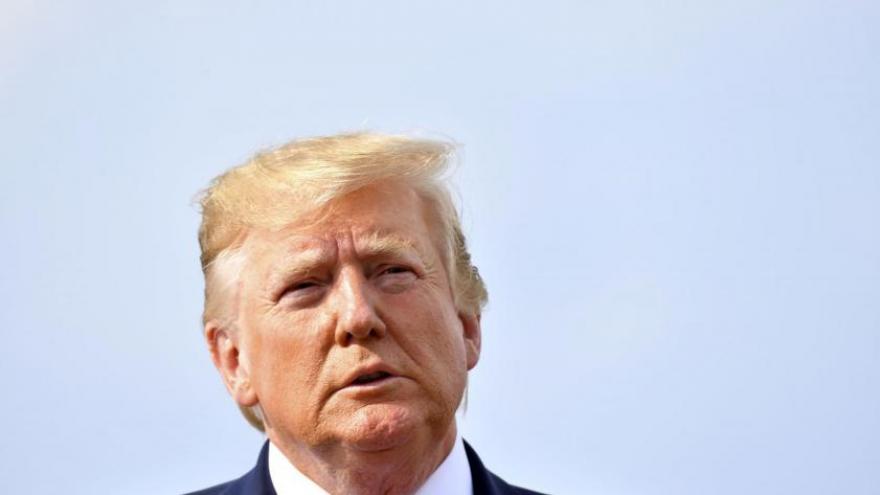 President Donald Trump on Wednesday said he is "seriously" considering ending US birthright citizenship despite the fact that such a move would face immediate legal challenge and is at odds with Supreme Court precedent.

(CNN) -- President Donald Trump on Wednesday said he is "seriously" considering ending US birthright citizenship despite the fact that such a move would face immediate legal challenge and is at odds with Supreme Court precedent.

"We're looking at that very seriously, birthright citizenship," Trump told reporters outside the White House, echoing his administration's previous vow to unilaterally end the process by which babies born in the country automatically become citizens.

The President did not elaborate on what he meant.

Trump's statement came as the administration announced a proposal to detain undocumented families together indefinitely, replacing the agreement that set a 20-day limit for holding children.

The 14th Amendment of the Constitution guarantees birthright citizenship and states: "All persons born or naturalized in the United States and subject to the jurisdiction thereof, are citizens of the United States and of the State wherein they reside." The ability of a president to end birthright citizenship has been extensively challenged by a range of lawmakers and legal scholars -- including one of Trump's own judicial nominees.

James Ho, a Trump appointee to the 5th US Circuit Court of Appeals who is highly respected in conservative circles, wrote a paper in 2006 noting that such proposals concerning birthright citizenship raise serious constitutional questions due to the clear words in the 14th Amendment.

"That birthright is protected no less for children of undocumented persons than for descendants of Mayflower passengers," Ho wrote in the paper published before he became a judge.

An attempt from the Trump administration to end birthright citizenship would also be challenged by Supreme Court precedent. In 1898 in United States v. Wong Kim Ark the court said that a child born in the US to non citizens parents of Chinese descent was entitled to citizenship at his birth.

The case came after Wong Kim Ark, traveled to China for a temporary visit when he was 22 and was denied reentry. And other cases since then have built upon it.

Speaking with Axios in 2018, Trump said he would end birthright citizenship through an executive order, though he did not provide a timeline for doing so.

"We're the only country in the world where a person comes in and has a baby, and the baby is essentially a citizen of the United States for 85 years with all of those benefits," he said. "It's ridiculous. It's ridiculous. And it has to end." In fact, more than 30 countries around the world have birthright citizenship

The comments were met with immediate pushback from lawmakers, including then-House Speaker Paul Ryan, a Wisconsin Republican, who told a Kentucky radio station that "you cannot end birthright citizenship with an executive order."