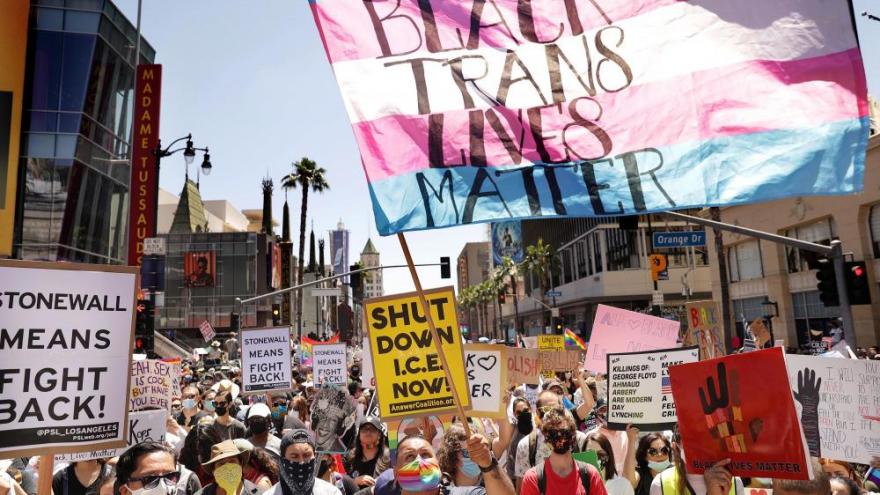 People fill the street on Hollywood Boulevard during a solidarity march in Hollywood, California on Sunday, June 14, 2020. The Trump administration wants to end an Obama-era rule that barred federally funded homeless shelters from discriminating against transgender people.

(CNN) -- The Department of Housing and Urban Development announced Wednesday that it plans to roll back an Obama-era rule that barred federally funded homeless shelters from discriminating against transgender people.

The department said in a statement that it will soon publish a modification to the 2016 part of the Equal Access Rule, which was put in place under then-President Barack Obama, that required shelters to provide lodging regardless of gender identity. It's another move from the Trump administration in its ongoing assault on federal protections for transgender Americans.

"The new rule allows shelter providers that lawfully operate as single-sex or sex-segregated facilities to voluntarily establish a policy that will govern admissions determinations for situations when an individual's gender identity does not match their biological sex," the statement read.

The department, which proposed a similar rule change last year, said in the statement that the new change would "better accommodate religious beliefs of shelter providers," as well as other practical concerns.

Under the proposed change, a shelter that does not accept a transgender person would be required to hand out "information about other shelters in the area that can meet their needs." A shelter that does accept transgender people would be required to give anyone uncomfortable with that "a referral to a facility whose policy is based on biological sex."

A number of transgender advocacy groups and legal organizations quickly denounced the proposed rule on Wednesday, which comes just weeks after the administration announced it was rolling back another Obama-era regulation, one that prohibits discrimination in health care against patients who are transgender. That rule change is already being met with legal challenges.

"This new rule would be particularly dangerous for the Black and brown transgender women who face extraordinarily high rates of unemployment and homelessness at any time, and particularly in this economic crisis," said LaLa Zannell of the American Civil Liberties Union.

"Shelters funded by taxpayers should be open to all -- period," added Zannell, who serves as the ACLU's Trans Justice Campaign manager.

Mara Keisling, the executive director of the National Center for Transgender Equality, said HUD Secretary Ben Carson "is contradicting the very mission of his department by trying to make shelters less safe for those who need them and further endangering the lives of marginalized people."

Keisling argued the proposal "flies in the face" of a Supreme Court ruling last month that held that federal civil rights law protects gay, lesbian and transgender workers, saying, "It will not stand."

A spokeswoman for HUD did not immediately respond to CNN's request for further details on the proposal.

Homelessness has long been an issue among transgender people in the US. One in five transgender individuals have experienced homelessness during their lifetimes, according to the National Center for Transgender Equality, which surveyed the community in 2010 and 2015.

According to the 2015 survey, 6% of respondents who were homeless said they had been denied access to a shelter in the preceding year, with 74% of those people saying they believed it was because of their gender identity or expression.

"The Equal Access Rule has been really important to ensuring" transgender people experiencing homelessness can use shelters, Rodrigo Heng-Lehtinen, the deputy executive director of the National Center for Transgender Equality, told CNN earlier this year.

After the department formally introduces the new rule, a two-month comment period will commence in which the public can speak out for or against the proposed change.