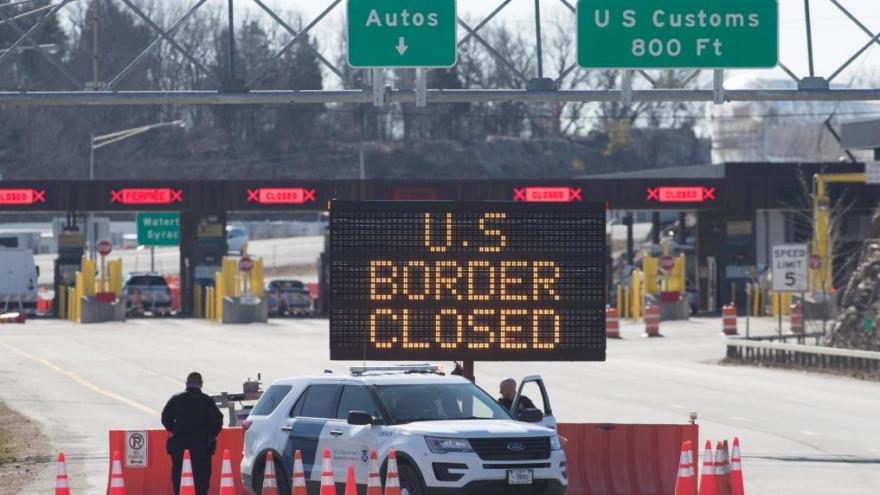 US Customs officers stand beside a sign saying that the US border is closed at the US-Canada border in Lansdowne, Ontario, on March 22, 2020.

(CNN) -- The Trump administration is preparing to extend travel restrictions and stringent border control measures this week related to the coronavirus pandemic, according to two administration officials.

The latest slate of restrictions indicate that while the United States moves toward reopening, the federal government is not ready to ease measures put in place in March that largely sealed off the US to stem the spread of Covid-19. The strict rules also have the effect of continuing to curb immigration to the US.

The US was not alone in shuttering its borders in response to the outbreak. Around the world, countries, including those neighboring the US, also limited who could pass through. Since first implementing the measures, the Trump administration has extended them once, in April.

"Those restrictions do expire here on the 21st of May. We will likely look at expanding those restrictions, as the country continues to be a phased opening approach, state-by-state, governor-by-governor, so we're taking a look at that as well," acting Homeland Security Secretary Chad Wolf told reporters last week.

A Department of Homeland Security spokesperson told CNN, "The United States has great appreciation for the efforts of our partners in Canada and Mexico to ensure that North America is working together to combat the pandemic caused by the novel coronavirus. Although a formal decision has not yet been made, the United States will continue to maintain the current restrictions on travelers crossing our land borders for non-essential purposes for as long as is necessary, while supporting cross-border activities that protect our economy, health and supply security, and critical industries."

CNN reached out to the White House for comment.

The limits of travel at the US northern and southern borders are one of a series of changes related to the pandemic. In March, the Trump administration also invoked a public health law, citing the coronavirus, that allowed for the swift removal of migrants apprehended at the border -- a move that raised concerns among officials involved in compiling data who believed it to be driven by political motivations. That order is also expected to be extended.

The rules curbing immigration have raised concern among immigrant advocates, lawyers and public health experts who argue restrictions appear to be intended to halt immigration, not to serve a public health purpose.

On Monday, more than two dozen health experts at leading public health schools, medical schools and hospitals cast doubt about the basis of those restrictions.

"The nation's public health laws should not be used as a pretext for overriding humanitarian laws and treaties that provide life-saving protections to refugees seeking asylum and unaccompanied children," they said in a letter to the Health and Human Services Department.

Stephen Miller, Trump's lead immigration adviser and the architect of the President's hardline immigration agenda, has previously tried to use diseases, like influenza and the mumps, as grounds to tighten the border, according to a former administration official.

Behind the scenes, the push to limit immigration during the coronavirus pandemic has been led by Miller, according to administration officials. After the President's April proclamation limiting green cards, Miller cast the move as a first step toward reducing the flow of immigrants coming into the United States.

Since then, aides have been developing follow-up actions that could limit the number of guest workers, which were a key exemption from the first action. Among the categories being raised are H-1B visas intended for highly skilled workers and H-2B visas, which allow employers to bring foreign workers to the United States for temporary non-agricultural jobs, such as landscaping, hospitality and other industries.

The suspension of the Optional Practical Training program, which allows foreign students to be temporarily employed in a job in the US related to their area of study is also being considered, according to a source familiar with the discussions.

Together, the series of changes by the administration have severely limited entry to the US.

Under the stringent border control measures related to coronavirus, only two migrants seeking humanitarian protections at the border have been permitted to remain in the US, according to US Citizenship and Immigration Services data, which was first reported by The Washington Post.

Customs and Border Protection, the agency tasked with US border security, referred 59 migrants to USCIS, which processes asylum claims, who expressed fear of torture if they were to be returned. Under the new policy barring most migrants at the border, the threshold to be exempted from expulsion is a claim under the Convention Against Torture, according to a Homeland Security official.

Previously, other asylum claims would be reviewed, but amid the pandemic, the administration has further limited access to humanitarian protections for migrants, claiming it is in the interest of public health.