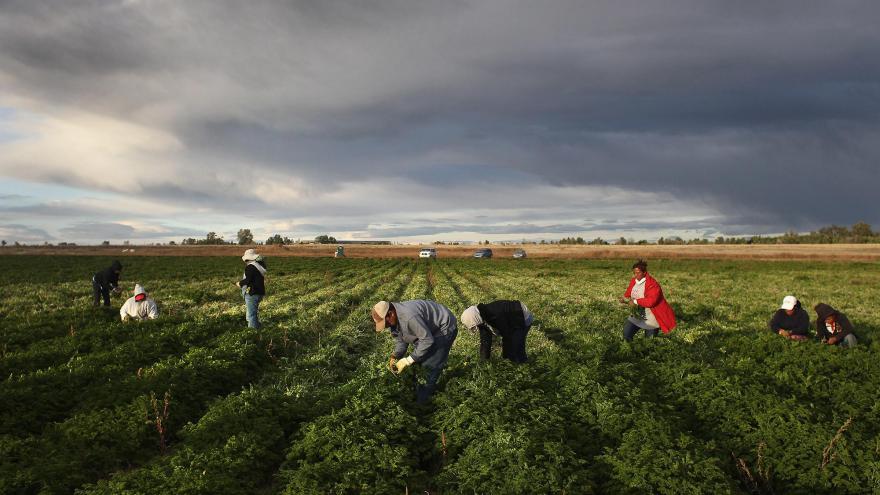 The Trump administration will make it easier for certain seasonal workers who are "essential to the US food supply chain" to remain in the country by temporarily amending visa requirements.

(CNN) -- The Trump administration will make it easier for certain seasonal workers who are "essential to the US food supply chain" to remain in the country by temporarily amending visa requirements.

The regulation, set to publish in the Federal Register on Thursday, applies to H-2B visas intended for seasonal workers and is designed to help US employers who rely on foreign workers. Qualified employers who are concerned workers will be unable to enter the US due to travel restrictions prompted by the coronavirus outbreak can employ those already in the US with a certain visa status.

Workers already in the US will be allowed to stay longer without first returning to their home countries and can start right away without waiting for full approval, making it easier for employers who can't employ workers from overseas to pick from the pool in the country.

In April, the Department of Homeland Security made similar changes for foreign workers directly working in the agriculture industry.

Some of the jobs impacted by the latest change could include the processing, manufacturing and packaging of human and animal food; transporting food from farms, or manufacturing or processing plants; and the selling of food, including restaurants.

The latest move follows President Donald Trump's executive order in April limiting green cards. Stephen Miller, Trump's lead immigration adviser who has led the push to limit immigration during the coronavirus pandemic, cast that order as a first step towards reducing the flow of immigrants, according to administration officials.

Since then, aides have been developing follow-up actions to limit the number of guest workers -- a key exemption from the April order. H-2B visas, which allow employers to bring foreign workers to the United States for temporary non-agricultural jobs, such as landscaping, hospitality and other industries, were among the visa categories being assessed.

Trump's political advisers view the immigration steps as motivating for his base supporters at a moment when the President's key election message -- a strong economy -- is badly weakened by the pandemic. The Bureau of Labor Statistics said Friday that the US economy lost 20.5 million jobs in April, the significantly sharpest and largest decline since the government began tracking the data in 1939.

Joseph Edlow, deputy director for policy at US Citizenship and Immigration Services, said Tuesday that the new regulation will prioritize both American workers and the economy.