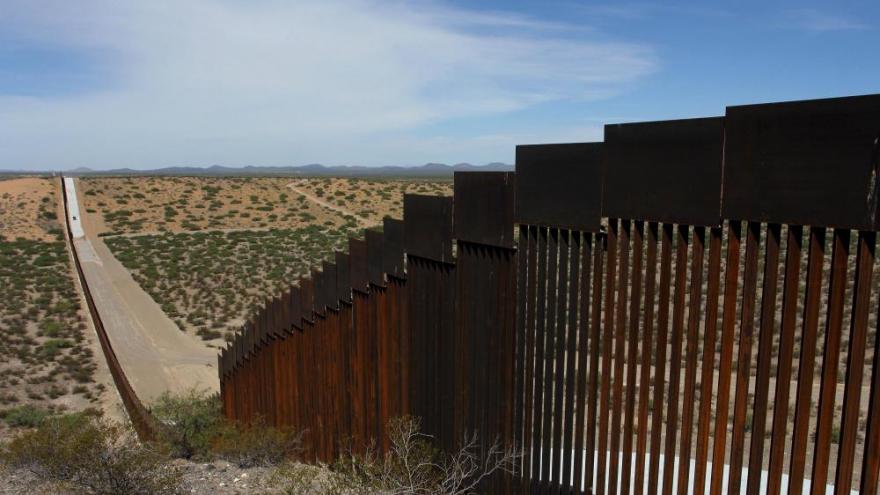 The Trump administration has built 100 miles of new wall along the US-Mexico border -- the majority of which is replacing previous construction -- acting Homeland Security Secretary Chad Wolf announced in Arizona on Friday, as the administration touts its record ahead of the presidential election.

(CNN) -- The Trump administration has built 100 miles of new wall along the US-Mexico border -- the majority of which is replacing previous construction -- acting Homeland Security Secretary Chad Wolf announced in Arizona on Friday, as the administration touts its record ahead of the presidential election.

Against the backdrop of a section of wall, Wolf called the 100-mile mark "a milestone achievement."

But the 100 miles are only a portion of the administration's goal to build 450 miles by the end of this year and the majority replaces wall that was already in place. As of December 6, around 90 miles of barriers that had been constructed replaced old, dilapidated designs, according to US Customs and Border Protection. The agency has not provided updated figures.

Three years into his presidency, President Donald Trump has faced a host of legal challenges over his border wall and his attempt to shore up the effort with additional funds from other government accounts. As the election year ramps up, his key campaign promise is likely to take on new urgency.

"This is a milestone achievement for the President, the department and more importantly, for our country, including communities like Yuma," Wolf said Friday.

Yet of the 100 miles, few are areas where there was previously no wall. In Yuma, Arizona, where Wolf's news conference took place, run-down barriers were replaced with an enhanced system.

"One thing I want to emphasize is that every inch of the 100 miles that we have constructed is new border wall system," he added. "It's not so-called replacement wall, as some of our critics claimed. It is new wall."

The White House has pushed for construction on the US-Mexico border to be dubbed new wall, according to a former administration official.

There was a "constant drumbeat" from the White House to call it "new wall" within the Department of Homeland Security, the official added. "There is a lot of pressure on the President to deliver in the campaign promise."

Acting Customs and Border Protection Commissioner Mark Morgan has previously said he feels "no pressure from the administration to build more miles of wall."

Last year, Trump declared a national emergency to dip into other government accounts to construct sections of the wall. The use of Defense Department funds for the border wall has received legal pushback from numerous groups and states, which have argued the administration circumvented Congress to tap into other funds.

This week, a federal appeals court allowed the administration to use $3.6 billion in military funds for the border wall, delivering a victory to Trump, who heralded the ruling on Twitter.

"The Fifth Circuit Court of Appeals just reversed a lower court decision & gave us the go ahead to build one of the largest sections of the desperately needed Southern Border Wall, Four Billion Dollars," Trump tweeted. "Entire Wall is under construction or getting ready to start!"

In response to the ruling, the American Civil Liberties Union has asked a separate federal appeals court to block the administration from using the funds.

Even with funding, the administration will also have to contend with private landowners whose property may be seized to build barriers along the border. The Trump administration has sent letters to dozens of residences in California, New Mexico and Texas notifying owners that the government is going to survey their land for future border barriers, two US defense officials told CNN late last year.

"We remain confident that we're on track for 450 miles that are either completed or under construction by the end of 2020," he said.