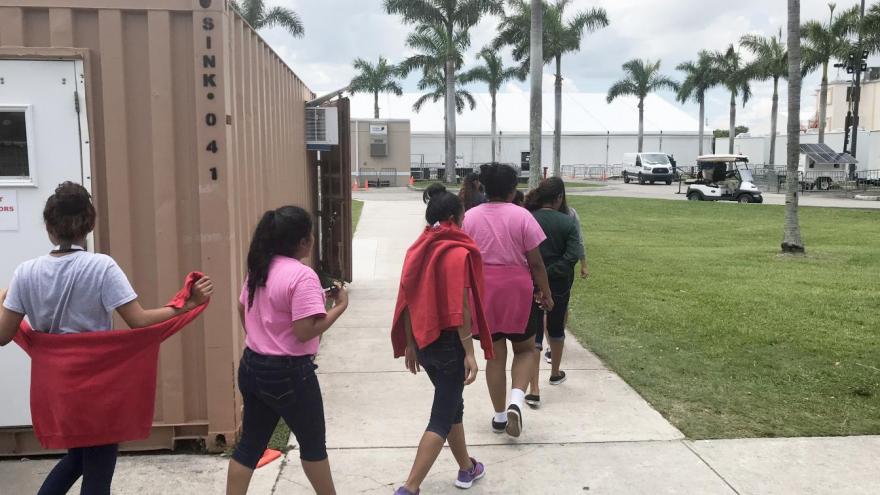 The Trump administration is reinforcing a tight deadline for immigration cases of unaccompanied migrant children in government custody in an effort to make quicker decisions about deportation, according to an email obtained by CNN.

(CNN) -- The Trump administration is reinforcing a tight deadline for immigration cases of unaccompanied migrant children in government custody in an effort to make quicker decisions about deportation, according to an email obtained by CNN.

The message seems designed to apply pressure on immigration judges to wrap up such cases within a 60-day window that's rarely met and falls in line with a broader effort by the administration to complete immigration cases at a faster speed.

Judge Ashley Tabaddor, president of the National Association of Immigration Judges, said deadlines are "putting the judge between a rock and a hard place."

"The only thing that can get done within 60 days is if someone wants to give up their case or go home or be deported," Tabaddor told CNN.

The Executive Office for Immigration Review, which oversees the nation's immigration court system, sent the email last month to assistant chief immigration judges, reminding them that unaccompanied children in government custody are to be considered the same as detained adults for purposes of scheduling cases.

While the 60-day deadline cited in the email is not new, it's difficult to meet for cases of unaccompanied kids, in part, because of the time it takes to collect the relevant information for a child who comes to the United States alone. As a result, cases can often take months, if not years, to resolve.

Unaccompanied children apprehended at the southern border are taken into custody by the Department of Homeland Security and referred to Health and Human Services. While in care at shelters across the country, case managers work to place a child with a sponsor in the United States, like a parent or relative.

Like adults and families who cross the US-Mexico border, unaccompanied children are put into immigration proceedings to determine whether they can stay in the United States.

The email from EOIR, dated January 30, says unaccompanied migrant children who are in the care of the government should be on a "60-day completion goal," meaning their case is expected to be resolved within 60 days. It goes on to reference complaints received by the office of the director, but doesn't say who issued the complaints or include a punishment for not meeting the completion goal.

EOIR spokeswoman Kathryn Mattingly told CNN that she could not comment on internal communications.

Golden McCarthy, deputy director at the Florence Immigrant and Refugee Rights Project, which works with unaccompanied migrant children, said "it does take time to reach out to" a child's caretaker or adults in the child's life.

"We all know that many times the child doesn't necessarily have the full picture of what happened; it does take time to reach out to caretakers and adults in their lives to understand," McCarthy said.

Initiatives designed to quickly process cases have cropped up before.

The Obama administration tried to get cases scheduled more expeditiously but deferred to the judges on the timeline thereafter, whereas the Trump administration's move seems to be an intent to complete cases within a certain timeframe, according to Rená Cutlip-Mason, chief of Programs at the Tahirih Justice Center and a former EOIR official.

The Trump administration also appears to be getting cases scheduled faster. In Arizona, for example, the Florence Immigrant and Refugee Project has begun seeing kids called into immigration court earlier than they had been before.

In a statement submitted to the House Judiciary Committee in January, the group detailed the cases of children, one as young as 10 years old, who appeared before an immigration judge within days of arriving to the US.

"I think our clients and the kids we would work with are resilient," McCarthy, the deputy director at the project, said. "But to navigate the complex immigration system is difficult for adults to do, and so to explain to a kid that they will be going to court and a judge will be asking them questions, the kids don't typically always understand what that means."

It can also complicate a child's case since he or she may eventually move to another state to reunify with a parent or guardian, requiring the child's case to move to an immigration court in that state.

Under the Trump administration, the Justice Department has rolled out a slew of other policies -- such as imposing case quotas -- to chip away at the nearly one million pending cases facing the immigration court system. Some of those controversial policies have resulted in immigration judges leaving the department.

In its latest budget request to Congress, the White House called for $883 million to "support 100 immigration judge teams" to ease the backlog.