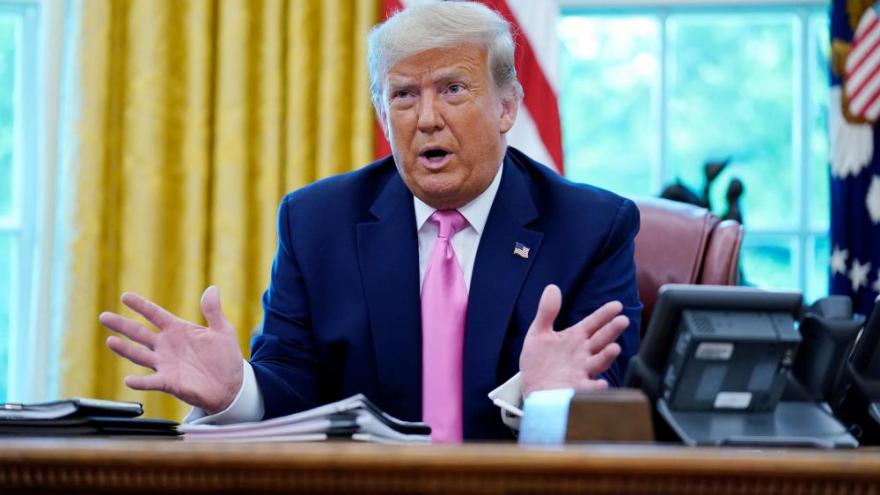 President Donald Trump speaks to the media while meeting with Senate Majority Leader Mitch McConnell and House Minority Leader Kevin McCarthy in the Oval Office at the White House, Monday, July 20, 2020, in Washington.

(CNN) -- The Trump administration is preparing to send federal agents to Chicago this week, two law enforcement officials tell CNN, as President Donald Trump and top officials are promising to crack down on what they say are violence and the increase in crime in major cities.

One senior law enforcement official told CNN that there are plans to send federal agents to Chicago through the end of the summer. The agents will focus on illegal gun sales and gun violence and outstanding warrants, among other targets, according to one of the sources. Both sources said an announcement could be made in the coming days.

The effort appears to be separate from the federal presence in Portland, Oregon, which was part of the President's demand that federal buildings be protected from protesters.

Chicago's mayor warned Monday about such plans in the wake of criticisms of how federal agents are facing off with protesters in Portland.

"I have great concerns about that particularly given the track record in the city of Portland. I spent a lot of time yesterday talking with the mayor or Portland to get a sense of what has happened there. We don't need federal agents without any insignia taking people off the streets and holding them, I think, unlawfully. That's not what we need," Mayor Lori Lightfoot said.

Lightfoot said that instead the federal government could help stem the violence by cracking down on illegal guns.

Trump said Monday he will send federal law enforcement to certain cities, "all run by very liberal Democrats," in the latest example of his "law and order" messaging.

Trump railed against Portland and others, saying in the Oval Office that he will be sending in some federal law enforcement.

The Chicago Tribune first reported that the administration was crafting plans to deploy federal agents to Chicago this week.

Acting Homeland Security Secretary Chad Wolf told Fox News in an interview, "Putting politics over public safety is going to not only going to have a detrimental effect here in the short term, but also in the long term. And the President has been very clear -- again, in these major metropolitan cities ... if you're not going to do your job, at some point, we will to have to take action to make sure that those communities are safe."

Asked about the potential of sending federal agents to Chicago, a Department of Homeland Security spokesperson told CNN, "DHS does not comment on any allegedly leaked operations."