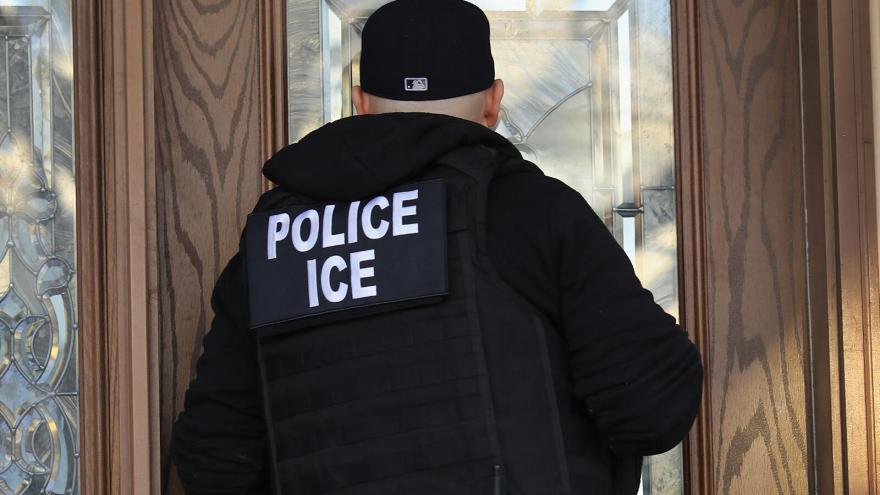 The Trump administration is considering putting up billboards of immigration violators, an unprecedented move in lockstep with the President's law-and-order message ahead of the election, according to two sources familiar with the proposal.

(CNN) -- The Trump administration is considering putting up billboards of immigration violators, an unprecedented move in lockstep with the President's law-and-order message ahead of the election, according to two sources familiar with the proposal.

The billboards would be put up by Immigration and Customs Enforcement -- the enforcement arm of the Department of Homeland Security -- in at least one city and would call attention to immigrants who have committed crimes and been released by local authorities. It's unclear what the billboards will look like and at what cost. If the plan proceeds, it seems intended to single out sanctuary jurisdictions and stoke fear within those communities.

The Department of Homeland Security, along with the Justice Department, have been criticized for efforts that look political to boost Trump amid a contentious election season.

But billboards for the purpose of singling out violators raises questions about what purpose it really serves. "How are they getting funding for it? How does that advance their mission?" said John Sandweg, former acting ICE director. "Running billboards, it's political messaging."

Hotlines to solicit tips or campaigns to recruit personnel are common, Sandweg noted, but those are more clearly linked to helping advance the agency's enforcement mission.

At the start of his administration, Trump threatened to take federal funds from sanctuary jurisdictions in an executive order. He also floated the possibility of releasing immigrants into sanctuary cities in part to retaliate against Democrats.

The Washington Post reported Tuesday that ICE is also preparing targeted arrests in cities that have adopted "sanctuary" policies. ICE said in a statement that it doesn't comment on "any law enforcement sensitive issues that may adversely impact our officers and the public."

Many of the largest cities in the country have sanctuary policies in place. The leaders behind them argue that such policies make communities safer because undocumented immigrants are?more likely to report crimes?if they don't fear deportation.

But ICE says that when immigrants with criminal convictions are released, it requires additional time and resources for the agency and "increases the occurrence of preventable crimes and preventable victims."

In recent weeks, DHS has repeatedly pushed out ICE press releases on arrests. And acting Homeland Security Secretary Chad Wolf has taken to Twitter to call out jurisdictions that don't cooperate with ICE.

"Instead of working with @ICEgov enforce the law, local officials in Mecklenberg County, NC decided it would be better to give these criminals 'sanctuary' so they could go back out on the streets — where they were free to reoffend until ICE arrested them," Wolf said in a tweet Wednesday.

Over the summer, ICE arrested more than 2,000 immigrants over the course of several weeks as part of an operation targeting people with criminal histories.

In March, ICE said that it would temporarily adjust its enforcement posture, citing the coronavirus pandemic. As a result, ICE Enforcement and Removal Operations focused enforcement on "public-safety risks and individuals subject to mandatory detention based on criminal grounds."

The agency has since said, citing lessons learned since the start of the pandemic, that it's "confident that our officers can properly and safely carry out operations."