Trump administration open to a second round of stimulus payments. Here's what that could look like 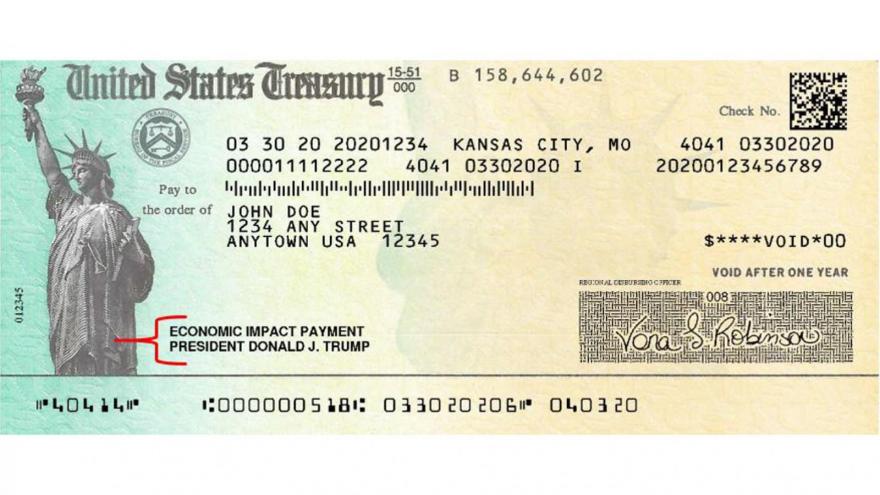 Trump administration considering a second round of stimulus payments.

(CNN) -- A second round of stimulus payments is on the negotiating table in Washington, but some of the 160 million Americans who got money the first time could be left out.

Instead, the Trump administration is pushing for a more limited approach. That's more likely to garner Republican support in Congress, where lawmakers are expected to consider another economic spending bill in late July.

"There's a lot of discussions going on. Probably, we would want to target those folks who lost their jobs and are most in need," said White House Economic Adviser Larry Kudlow in a interview with Fox Business Tuesday.

His remarks followed comments from President Donald Trump earlier in the week that suggested Americans would be getting a second round of checks that would be "very generous."

Congress included the first round of stimulus payments in the sweeping $2 trillion economic response to the pandemic passed in March. It provided for direct payments of up to $1,200 for individuals and $2,400 for families. Eligibility was largely based on income and excluded individuals earning more than $99,000 and married couples without children earning more than $198,000, for example.

The Treasury Department and the Internal Revenue Service worked to send out the money through direct deposits, or as check and debit cards sent in the mail. They started going out in mid-April and have been disbursed to nearly 160 million people for a total of $267 billion.

The program got money into people's hands quickly as unemployment soared. Combined with a boosted unemployment insurance benefit, the federal economic response more than offset the decline in earnings and, in fact, led to a decline in poverty, according to a report from researchers at the University of Chicago and University of Notre Dame.

But some economists say a targeted approach would be more effective.

The problem with the stimulus checks was that the aid was "mismatched" with the need, said John Friedman, a professor at Brown University who is tracking the economic impacts of the coronavirus with a Harvard-based team of researchers called Opportunity Insights.

While the first round of payments increased spending, most of the jump was from low-income households. That helped those families pay bills and buy groceries. But it didn't help them keep their jobs because the rich, on the other hand, cut back. That, in turn, hurt low-wage workers whose jobs are in wealthy zip codes, their research found.

Giving the upper class more money isn't going to solve that problem if there is still a public health crisis and some people aren't comfortable going out to eat and shop.

That's why, Friedman argues, that new stimulus money should be targeted to both low-income households and to people who saw a major loss of income.

"I'm not a fan of the $1,200 checks. For some people, it was too little if they just lost their job. For other people, who kept their jobs, it wasn't necessary," said Stijn Van Nieuwerburgh, a professor at Columbia Business School.

There are a couple of reasons, he argues, that Congress should be mindful of how it's spending more money. One, is that the federal government has already spent more than $3 trillion on its economic response and is running a massive deficit. Second, it's very possible a second wave of the virus will shut down cities and states again in the fall.

"The pandemic isn't over yet. We can't shoot all our bullets in the first few months," Nieuwerburgh said.

Both economists point to extending unemployment insurance benefits, in some form, as a way to target those who are most in need.

Congress boosted unemployment checks by $600 a week and added 13 weeks of pay, beyond what states offer. The additional money will expire on July 31 without Congressional action, but the 13-week extension will remain in place until the end of the year.

Extending unemployment benefits could be another thing Congress considers in July, along with additional support for small businesses and funding for states and cities.

There is now broad agreement something has to be done, but there's division among Republicans, who control the Senate, about what that should look like -- and they're not unified on whether it should include more direct stimulus payments.