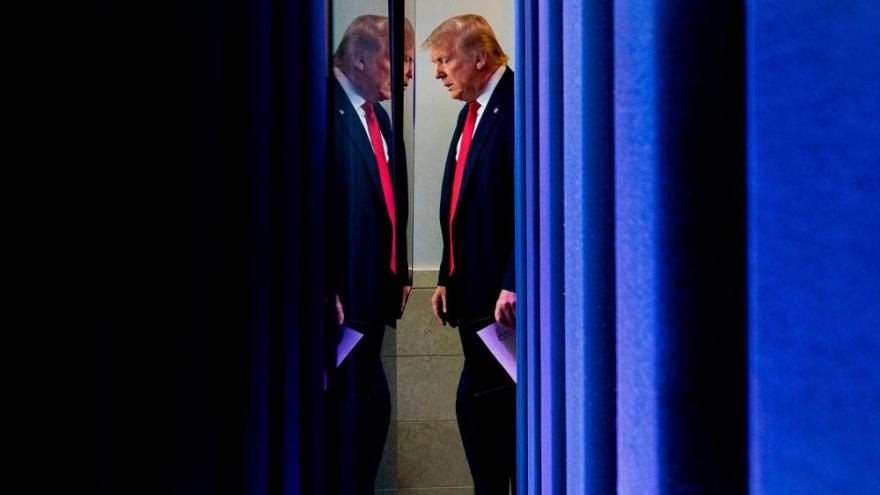 The Trump administration is planning to launch a new pandemic office as coronavirus intensifies. The image shows US President Donald Trump arrives to speak to the press in the White House in Washington, DC, on July 2, 2020.

(CNN) -- The Trump administration disbanded the National Security Council's pandemic response office in 2018 -- and now, on the defensive after a failed response to the coronavirus pandemic, they are planning to launch a similar office at the State Department.

The National Security Council hosted an interagency meeting Thursday to discuss the plans for the office, which will fall under the leadership of a new position: coordinator for pandemics, a senior administration official said.

The goal of Thursday's meeting was to flush out the details and establish a proposal for President Donald Trump to approve -- but the push to start a new office has drawn criticism from health experts and former officials, some of whom question whether this new unit is being located at the State Department, and not the NSC, simply to differentiate from the Obama administration effort.

Officials who had worked on that pandemic response team -- the directorate for global health and security and bio-defense -- lamented the Trump administration's move to gut the office, a stance the White House contests, arguing it reassigned staff and streamlined bureaucracy.

'Deja vu all over again'

Former officials say the administration could have been better prepared for the pandemic if it had left the original office in place instead of trying to replicate it even as the virus gained new ground. As the US hit a record Wednesday for the highest single day count of new infections, these former officials said having the original unit in place "absolutely" would have made a difference in coordinating a more expedient and effective response to the coronavirus pandemic, which has now cost more than 125,000 American lives.

Lisa Monaco, who served as President Barack Obama's homeland security adviser and oversaw the creation of the NSC's global health directorate, told CNN's New Day on Thursday that the Trump administration's office "is deja vu all over again."

Health experts, meanwhile, say that the State Department has a crucial role to play in a pandemic response, but the key coordinating role must be played by the White House. Some raised questions about the potential impact that this new office could have on highly successful programs at the US Agency for International Development and the possibility it might drain funding and resources away from them, further hurting global health efforts.

The NSC and the State Department did not reply to a request for comment.

Monaco pointed out that the Obama administration had deliberately placed the directorate within the National Security Council, which takes policy recommendations from agencies across the government and uses them to advise the President, "because in an epidemic like Ebola, in a pandemic like Covid-19, what you need is a whole of government response and you need swift action. And you need swift decisions from the President, and you need that policy coordinated across the entire government."

"This move now to set this unit, re-set this unit up, although in a different building, on the one hand is the recognition that you do indeed need a specific identified place to constantly be focusing on pandemic response," Monaco said. "That is good. On the other hand, really what we are seeing here is the risk of repeating mistakes all over again."

She pointed to the Trump administration putting a new unit for biodefense and pandemic response at the Department of Health and Human Services in 2018. When the coronavirus pandemic began spreading, the administration began using a task force under the Secretary of Health and Human Services Alexander Azar. "That did not work," she said, and the administration eventually brought the coordination effort back to the White House under Vice President Mike Pence, where a broader, more all-encompassing effort is easier to coordinate.

There is also support in Congress for this effort, the official said, noting that housing the office at the State Department means it will have more longevity and less turnover.

But Monaco argued that putting it at State "doesn't make sense," and health experts also pointed to shortcomings of that plan.

Steve Morrison, director of the Global Health Policy Center at the Center for Strategic and International Studies, said there is a point in having the State Department play a role in a global pandemic, particularly in coordinating support and outreach to lower income countries. But that's not enough, he said.

"Putting it in State Department, in theory, is a good thing, but it has to be done side by side with something at the White House," Morrison told CNN. "The White House is about really taking the entire government's approach and representing the President and restoring the leadership of the White House."

"There's a huge void of leadership from this administration on what's happening outside our borders and this is the moment when the administration should wake up and start doing something that's deliberate and very serious," Morrison said. "Restoring leadership at the NSC should be a first prerequisite for going ahead."

Both Morrison and Monaco said the administration was making a serious mistake in pulling out of the World Health Organization. "This recognition that you need diplomacy. Absolutely, you need diplomacy in a pandemic response," Monaco said. "That is one of the reasons we should not be pulling out of the World Health Organization, and the most effective diplomacy can be done by the President and the vice president."

The Obama administration established the global health directorate in 2015 after the Ebola epidemic of 2014 to help coordinate the response and housed this office at the NSC because of proximity to the president, and because the interagency process already goes through that body. "In a health security crisis, speed is essential. When this new coronavirus emerged, there was no clear White House-led structure to oversee our response, and we lost valuable time," wrote Beth Cameron, the former director of the office, in a Washington Post oped.

Former national security adviser John Bolton directed that the unit be disbanded in 2018 shortly after he took the job. The unit's leader, Timothy Ziemer, left the administration and other members of the team were reassigned to other units within the NSC. When the administration came under fire for downplaying the pandemic and mismanaging the response nationally, Trump denied closing the directorate, saying he didn't know about it.

Along with the global health directorate, Obama's National Security Council also left the Trump administration a detailed document on how to respond to a pandemic. The playbook -- 40 pages plus appendices -- contained step-by-step advice on questions to ask, decisions to make, and which federal agencies are responsible for what. It explicitly lists novel coronaviruses as one of the kinds of pathogens that could require a major response.

In addition to the playbook, outgoing senior Obama officials also led an in-person pandemic response exercise for senior incoming Trump officials in January 2017 -- as required by a new law on improving presidential transitions that Obama signed in 2016.