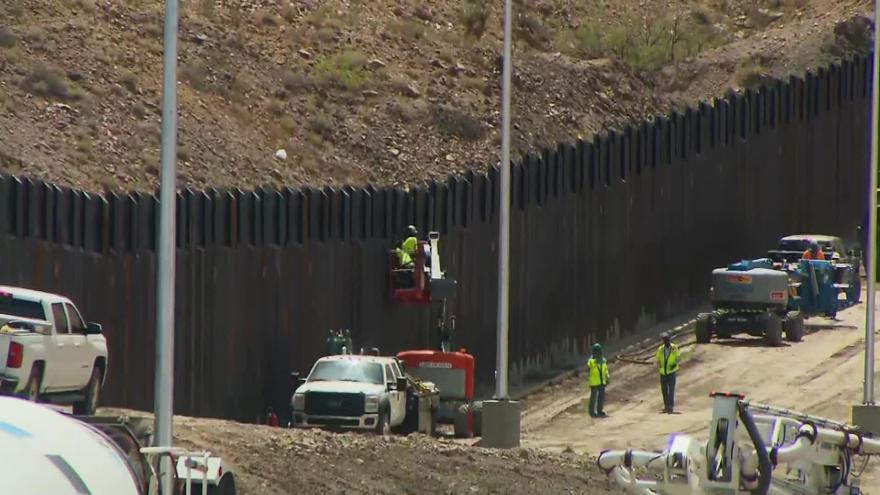 The Trump administration is continuing to award border wall contracts in the waning days of Donald Trump's presidency, including in areas where private land hasn't yet been acquired.

(CNN) -- The Trump administration is continuing to award border wall contracts in the waning days of Donald Trump's presidency, including in areas where private land hasn't yet been acquired, an unusual move that will complicate President-elect Joe Biden's pledge to halt construction.

Asked by CNN Tuesday whether there are plans to continue to finalize contracts, even in areas where the real estate is not owned by the federal government, acting Customs and Border Protection Commissioner Mark Morgan responded "yes."

"We believe that probably by January 17,18,19, we will have well over 700 miles of that 800 funded...The contract will have already been awarded," Morgan said. "The major milestone is having a contract awarded."

Striking a contract before privately-owned land -- which makes up a considerable portion of the Rio Grande Valley -- has been acquired by the government is outside of the usual process for the US Army Corps of Engineers, which provides direction and oversight of border projects, according to Charles Tiefer, a government contracting law professor at the University of Baltimore.

"The Army Corps exists to build," Tiefer said. "That's their mission. And so they are expected to always follow the orderly path of buying the land before awarding contracts."

Attempts to halt construction completely, as Biden promised, will prove difficult, particularly if contracts continue to be struck -- a challenge Morgan acknowledged Tuesday. "They could terminate those contracts if they want to, but that's going to be a very lengthy, messy process," Morgan said.

"We're going to have to go into settlement agreements with each individual contractor," Morgan added, noting, that payments will have to be made for what they've already done, as well as for materials produced. He estimated the process could cost billions.

Raini W. Brunson, a spokesperson for the US Army Corps of Engineers, said the agency had nothing to add beyond Morgan's comments.

In a statement, CBP said the majority of the miles funded through fiscal year 2020 are on federally-owned property and noted that design and real estate acquisition activities "occur in parallel."

"Real estate acquisition activities continue for other areas of the project while the construction contractor is working in areas that have been acquired or were already Government owned therefore mitigating any possible delays," the statement reads. "Based on CBP's experience in constructing barriers in 2007-2009, this is the most efficient process in order to rapidly construct in areas where the Border Patrol agents need it most."

Morgan touted the administration's progress on border wall construction on Tuesday in a call with reporters, saying the goal to complete 450 miles by the end of 2020 had been met.

Of the 450 miles, the majority is replacing old, dilapidated barriers with a new enhanced, border wall system, a marked difference from the fencing previously constructed in some regions.

Roughly 47 miles have gone up where no barriers previously existed, according to data provided by CBP.

Over the course of the last four years, Trump has repeatedly cited the border wall as an accomplishment and as a critical component of his immigration agenda. Biden has set a different tone.

"Building a wall will do little to deter criminals and cartels seeking to exploit our borders," Biden's plan reads. "Instead of stealing resources from schools for military children and recovery efforts in Puerto Rico, Biden will direct federal resources to smart border enforcement efforts, like investments in improving screening infrastructure at our ports of entry, that will actually keep America safer."

CNN previously reported that Biden's promise to put a stop to construction had prompted discussions among Customs and Border Protection officials about what would occur in that event, particularly if funding is cut, according to a Homeland Security official. A US official told CNN that some contracts can be modified and government lawyers are discussing what happens with acquisition of private land, but no decisions have been made.

The government has a long standing authority to terminate contracts, though it also comes at a cost, according to contracting experts. But the incoming administration might also have to contend with contracts awarded in areas where the government doesn't yet own the land.