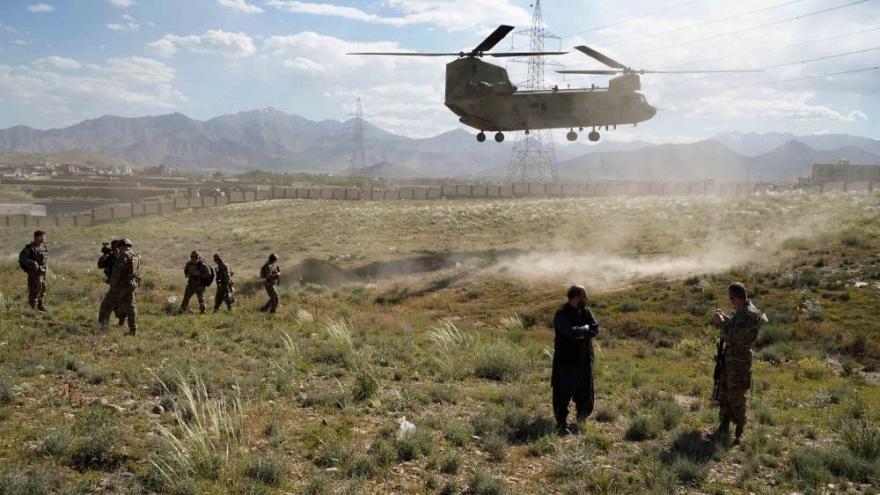 The Trump administration is close to finalizing a decision to withdraw more than 4,000 troops from Afghanistan by the fall, according to two administration officials.

(CNN) -- The Trump administration is close to finalizing a decision to withdraw more than 4,000 troops from Afghanistan by the fall, according to two administration officials.

The move would reduce the number of troops from 8,600 to 4,500 and would be the lowest number since the very earliest days of the war in Afghanistan, which began in 2001.

It would pave the way for a US exit which President Donald Trump remains determined to achieve.

Yet the discussions are taking place against the backdrop of an uptick in violence from the Taliban against the Afghan government, despite the insurgent group signing an historic agreement with the US in February and as the Trump administration has appeared to hold back on its criticism of the Taliban.

While the decision is not final, Secretary of Defense Mark Esper discussed the plan with NATO allies last week and the topic was revisited in his meetings with NATO officials in Brussels Friday.

"We will also follow up on our discussion on Afghanistan. NATO will continue to adjust our presence in support of the peace process," NATO Secretary General Jens Stoltenberg said Friday alongside Esper before their meeting. "This will be done in close coordination with Allies and partners."

Under the agreement signed with the Taliban in February, the US committed to pulling all of its troops out of Afghanistan by next April -- within 14 months of its signing -- if the Taliban upheld certain commitments in the agreement. The Taliban committed to preventing terrorist groups using Afghan territory to threaten the US and its allies, breaking ties with groups which threaten the US, and pursuing intra-Afghan negotiations.

As part of that deal, the US also agreed to reduce the number of troops from about 13,000 to 8,600 by early July. The US has already hit that 8,600 figure, ahead of schedule, two US officials told CNN.

It is unclear when the withdrawal of the 4,000 additional US troops, a policy decision in its final stages, will begin. US officials at the State Department and the Pentagon have reiterated that any reduction below the 8,600 mark would be "conditions based."

"US force levels in Afghanistan remain in the mid-8,000s. Additional drawdowns beyond this number remain conditions-based according to the US Government's assessment of the overall security environment and Taliban compliance with the US-Taliban agreement," Pentagon spokesman Major Rob Lodewick, told CNN.

The National Security Council did not reply to a request for comment.

Under the plan to reduce troop levels to 4,500 by the fall the US military will likely struggle to carry out the missions it is currently tasked with in the country.

The training and advising of local Afghan forces will likely have to be scaled back considerably in the event of such a drastic reduction, leaving the Afghans vulnerable as the Taliban continues to carry out attacks on the military and police.

The remaining US troops will likely focus on counterterrorism operations targeting the local ISIS affiliate, ISIS-K, which retains a presence in the east of the country, as well as remnants of al Qaeda. A recent UN report found that the Taliban has retained links with al Qaeda despite the US-Taliban agreement.

But many will be concerned the US is withdrawing too fast.

Last month, the top US Commander overseeing military operations across the Middle East said the conditions that would allow for a complete withdrawal of US forces from Afghanistan "have not been fully met," despite the agreement with the Taliban.

Trump administration officials also acknowledge that the commander in chief is the ultimate decision maker when it comes to troop levels.

"It is the prerogative of the President if he thinks that the conditions have been met and we could do it faster," Zalmay Khalilzad, the US special representative for Afghanistan reconciliation, told reporters earlier this month when about Trump possibly pulling out before the election. "But the key thing is that whether the conditions have been met, and I think that is --- the most important issue, and we are monitoring that very closely.

Some US officials are concerned that Trump could decide to withdraw all of the US troops from Afghanistan before the election in November to fulfill a promise he made in the 2016 campaign, two US officials told CNN.

But one US official familiar with the discussions said they believe the President would agree to the 4,500 figure because it would mean there would be fewer troops than when President Barack Obama left office, allowing Trump to declare a victory on the campaign trail.

Trump's ambition to drawdown troops in Afghanistan throughout his presidency was highlighted in new detail by his former national security adviser John Bolton in his book, "The Room Where It Happened: A White Hose Memoir," published this week.

"I gave you what you asked for. Unlimited authority, no holds barred. You're losing. You're getting your ass kicked. You failed," Trump told his then Secretary of Defense Jim Mattis in 2018, according to Bolton's book.

Bolton said this week that a final straw in his departure from the White House was Trump's plan to invite the Taliban to Camp David. After Bolton left, the meeting did not happen but the discussions continuing culminating in the February signing.

Despite the agreement, the Taliban has continued to carry out deadly attacks on the Afghan government and civilians, but it has not targeted US troops.

A Pentagon report found the insurgent group increased the ferocity of its attacks in the month following the signing of the agreement with the US.

These attacks have devastated the Afghan government and created tension with the US.

The US military has carried out some defensive airstrikes in defense of Afghan troops that have come under Taliban attack but per the agreement it is restricted from taking any offensive action against the Taliban.

Last month the Afghan government blamed the Taliban for a terrorist attack on a maternity ward at a hospital in Kabul last month, which killed more than a dozen people, including babies. It also prompted Afghan President Ashraf Ghani to announce his country was resuming offensive operations against the insurgent group following a spate of deadly terrorist attacks.

Khalilzad tweeted that the US government "assessed" that ISIS-K carried out the horrific attack. Other US officials, however, were less confident that the Taliban was not involved or informed, citing the sophistication of the network involved in the attack, a US defense official and a source familiar with the intelligence told CNN.

A sliver of hope emerged when a ceasefire between the warring parties was largely upheld during the three-day Muslim holiday of Eid al-Fitr last month.

Secretary of State Mike Pompeo commended that ceasefire and said he expects the Afghan and Taliban leaders "not to escalate violence after Eid."

"This violence is counterproductive, deepens grievances, and prolongs the suffering of the Afghan people," Pompeo said.

But since Eid, the Taliban's attacks have continued.

On Monday Afghan National Security Spokesperson Javid Faisal tweeted that "the past week was the deadliest of the past 19 years. Taliban carried out 422 attacks in 32 provinces, martyring 291 ANDSF members and wounding 550 others." He also called the Taliban's violence "inconsistent with their rhetoric on peace."

The State Department responded by pointing to a previous tweet from Khalilizad, calling for both the Afghan government and the Taliban to "take steps necessary to reach intra-Afghan negotiations."

Privately, US officials say it is false that the last week was the most deadly and point out that the Taliban is sticking to the agreement by not attacking US forces.

Some US officials also expect the Taliban's violence to subside once the intra-Afghan negotiations between the US and the Taliban begin and a political solution is in sight. However, those talks which were supposed to begin in the spring have not yet started.

This story has been updated to include comment from the State Department.