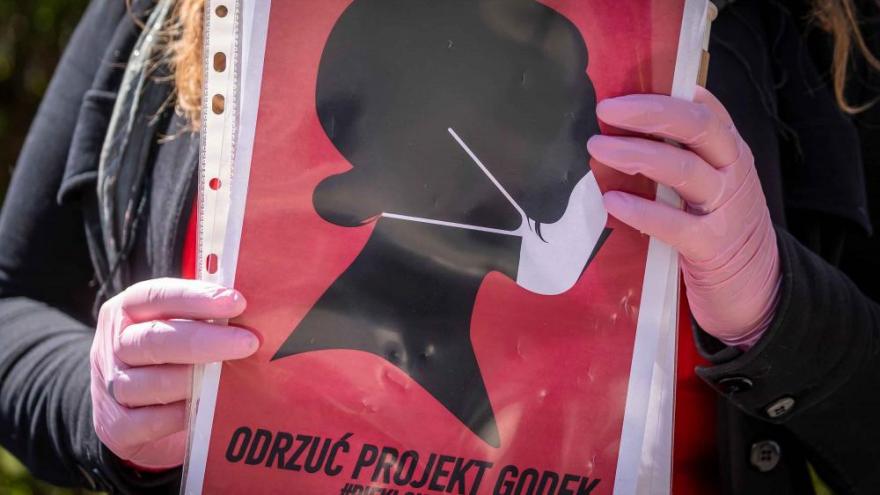 The Trump administration is asking the Supreme Court to reinstate a rule requiring abortion seekers to visit health care providers in person to acquire one of the pills for medication abortions. This image shows a women's rights activist protesting in front of the parliament building in Warsaw, on April 16, 2020.

(CNN) -- The Trump administration is asking the Supreme Court to reinstate a rule requiring abortion seekers to visit health care providers in person to acquire one of the pills for medication abortions, after lower courts blocked the rule during the ongoing coronavirus pandemic.

The escalated fight surrounding the pills -- which the Food and Drug Administration does not require to be taken while with the health care provider -- is the latest development in a pandemic-era clash over abortion access that has increasingly manifested as a battle of regulations.

"Given that surgical methods of abortion remain widely available, the enforcement of longstanding safety requirements for a medication abortion during the first ten weeks of pregnancy does not constitute a substantial obstacle to abortion access, even if the COVID-19 pandemic has made obtaining any method of abortion in person somewhat riskier," acting Solicitor General Jeffrey Wall wrote Wednesday.

Medication abortion, a nonsurgical procedure effective until about 10 weeks into a pregnancy, typically entails taking two drugs several days apart. The contested regulation concerns mifepristone, the first drug, which works to block the hormone progesterone necessary for a pregnancy to continue.

The FDA information page on mifepristone states that the drug "may only be dispensed in clinics, medical offices, and hospitals by or under the supervision of a certified healthcare provider," but does not specify where the patient must take it. The second drug taken in a medication abortion, misoprostol, causes cramps and heavy bleeding as the uterus expels its contents. It can be taken "at a location appropriate for the patient," according to the FDA.

The Trump administration's challenge comes after several reproductive health groups, represented by the American Civil Liberties Union, sued the FDA in May over the long-standing requirement, arguing that it was unconstitutional for the agency to maintain the rule for the abortion drug while lifting it for other drugs in light of the pandemic.

"By making life-threatening viral exposure risks a condition of treatment for medication abortion and miscarriage care, the FDA's continued maintenance of the Mifepristone In-Person Dispensing Requirement jeopardizes the safety of patients, clinicians, and the public at large, with no countervailing benefit—and with particularly severe implications for low-income people and people of color, who comprise a disproportionate share of impacted patients and who are already suffering and dying from COVID-19 at substantially higher rates," the ACLU wrote at the time.

A lower court sided with the groups and temporarily blocked the requirement in July, and a federal appeals court denied the administration's efforts to overturn the ruling earlier this month.

Julia Kaye, staff attorney at the ACLU Reproductive Freedom Project, said in a statement Wednesday that she hoped the Supreme Court would deny the petition.

"The Trump administration refuses to end its crusade to subject abortion patients and their families to entirely unnecessary exposure risks," Kaye added. "Forcing patients to travel during a pandemic just to pick up a pill is irrational and dangerous, which is why the medical community uniformly opposes this senseless rule."

The administration's efforts follow several states' efforts to limit abortion access during the pandemic, labeling it an elective procedure that can be limited under state orders professing to protect stores of personal protective equipment during the pandemic.

The move also comes on the heels of other efforts by the administration to regulate abortion access. The administration issued a federal regulation in December that would have required insurers on the Obamacare exchanges that cover abortions to issue separate bills for that coverage. A federal judge blocked it in July.