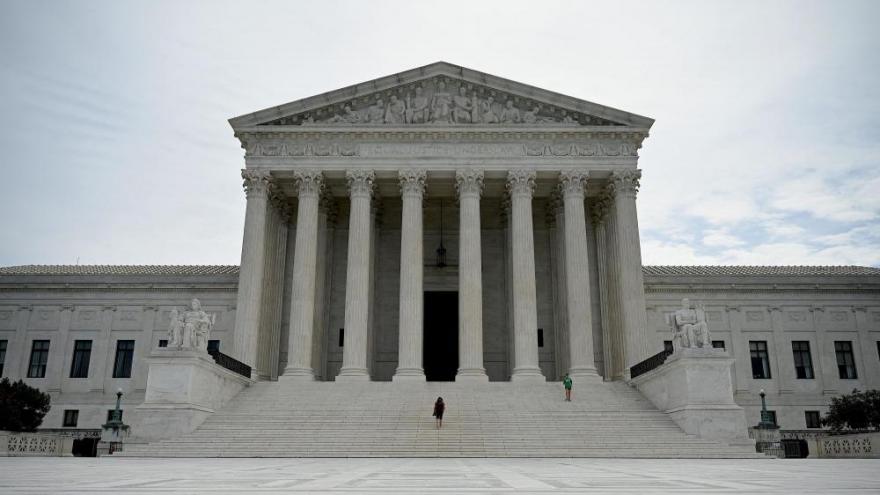 The Justice Department asked the Supreme Court to invalidate the Affordable Care Act, the landmark health care law that enabled millions of Americans to get insurance coverage and that remains in effect despite the pending legal challenge.

(CNN) -- In the midst of a global pandemic with the presidential election just months away, the Justice Department asked the Supreme Court on Thursday to invalidate the Affordable Care Act, the landmark health care law that enabled millions of Americans to get insurance coverage and that remains in effect despite the pending legal challenge.

In a late-night filing, Solicitor General Noel Francisco said that once the law's individual coverage mandate and two key provisions are invalidated, "the remainder of the ACA should not be allowed to remain in effect."

The justices will hear arguments in the case sometime next term, although it is unclear if they will occur before the November election.

The dispute ensures another major shift in the political landscape during the election season on an issue that has dominated American politics for the last decade. It will be the third time the court has heard a significant challenge to the law. The case pits a coalition of Democratic attorneys general led by California and the House of Representatives, which are defending the law, against the Trump administration and a group of red state attorneys general led by Texas.

At issue is whether the law's individual mandate was rendered unconstitutional because Congress reduced the penalty for remaining uninsured to zero and, if so, whether that would bring down the entire law. A federal appeals court in December ruled that the mandate was unconstitutional but punted the decision on which, if any, of the law's provisions could be retained back to the district court -- which had previously found the entire law to be invalidated.

The administration has generally sided with the Republican attorneys general but recently argued that the entire law should fall but that the ruling should only apply to the 18 states that brought the challenge.

In Thursday's filing, Francisco stressed, "Nothing the 2017 Congress did demonstrates it would have intended the rest of the ACA to continue to operate in the absence of these three integral provisions."

He said that "the entire ACA thus must fall with the individual mandate, though the scope of relief entered in this case should be limited to provisions shown to injure the plaintiffs."

"President Trump and the Republicans' campaign to rip away the protections and benefits of the Affordable Care Act in the middle of the coronavirus crisis is an act of unfathomable cruelty," she said in a statement Thursday.

"Today, his Administration is filing a brief with the Supreme Court to rip health care coverage away from 23 million Americans — including 224,000 Wisconsinites," Biden said, remarking on Trump's visit to the Badger State Thursday. "Every American deserves the peace of mind that comes (with) access to affordable, high-quality health care."

Biden, who is planning to make a new health care push on protecting the Affordable Care Act this week, was vice president when former President Barack Obama signed the bill into law in 2010. He is calling for strengthening it by making federal premium subsides more generous and allowing more people to qualify for subsidies. He would also add a government-run public option and would lower the Medicare eligibility age to 60.

Meanwhile, Priorities USA, a pro-Biden super PAC, is rolling out a television ad entitled "Failing On Health Care," which highlights Trump's continued effort to undermine Obamacare and will run in Wisconsin, Pennsylvania and Michigan. Also, it is releasing a digital ad entitled "Pull the Plug," which emphasizes that 133 million Americans with pre-existing conditions could lose protections and their costs could rise if Trump's Supreme Court challenge is successful.

"The ACA has been life-changing and now through this pandemic, we can all see the value in having greater access to quality health care at affordable prices," he said, noting that Black Americans are four times more likely to be hospitalized with coronavirus. "Now is not the time to rip away our best tool to address very real and very deadly health disparities in our communities."

About 11.4 million people signed up for 2020 Obamacare polices on the exchanges, while nearly 12.7 million low-income adults have gained coverage through Medicaid expansion. It allows young adults up to age 26 to stay on their parents' policies and bans insurers from denying coverage to those who buy their own policies or charging them more because of pre-existing conditions. And it lets many people obtain free birth control, annual physicals, mammograms and cholesterol tests.

It affects nearly all Americans, many of whom aren't aware of the law's impact.

The filings come a day after House Democrats unveiled a bill to enhance the landmark law. Similar to Biden's plan, it would make Obamacare policies more affordable by bolstering federal premium subsidies -- limiting monthly premiums to 8.5% of enrollees' income and allowing more middle class Americans to receive the subsidies by eliminating the income cap of four times the poverty level. It also tries to entice more states to expand Medicaid to low-income adults by covering 100% of the cost for the first three years.

And it would reverse several moves made by the Trump administration to weaken the law, including restoring funds for marketing and enrollment assistance during Obamacare's annual sign-up period.

The move in the House, led by Pelosi, seeks to draw a sharp contrast between the parties on health care, an issue that's become even more pressing amid the coronavirus pandemic.

"It was wrong anytime," the California Democrat said of the administration's stance. "Now, it's beyond stupid."

This story has been updated with reaction from House Speaker Nancy Pelosi.