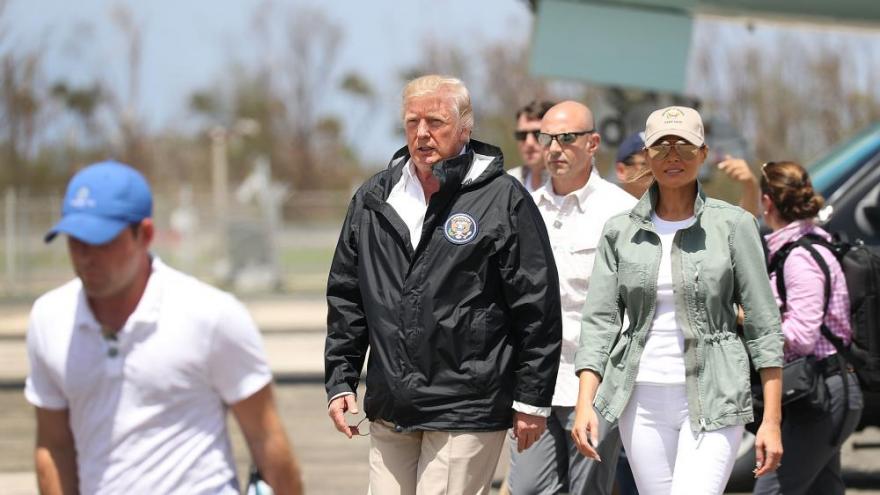 The Trump administration is expected to announce $13 billion in additional aid to Puerto Rico to help with rebuilding in the aftermath of 2017's Hurricane Maria.

(CNN) -- The Trump administration on Friday announced $13 billion in additional aid to Puerto Rico to help with rebuilding in the aftermath of 2017's Hurricane Maria.

White House press secretary Kayleigh McEnany touted the $13 billion FEMA award as two of the agency's "largest grants ever" in a statement. It will include a $11.6 billion federal share of funding for the projects.

The move is likely an attempt to appeal to Puerto Rican voters who moved to the battleground state of Florida after the hurricane struck the US territory.

In the three years since the storm made landfall, the rebuilding process has been slow and costly. In November 2018, White House officials told congressional leaders and appropriators that the President did not want any additional relief funding sent to the island.

Asked why he didn't approve the aid package years ago, Trump baselessly claimed in a Friday news conference that it was the Democrats' fault.

"Very tough to get things passed, Democrats, where they don't want to see this happen," he said, though the reality is his administration held up aid to the island as he criticized its residents.

The President also boasted that he is the "best thing that's ever happened to Puerto Rico" despite having criticized the island and its residents for years.

Trump's lack of empathy for Puerto Ricans has been at odds with his treatment of storm victims in the continental US during his tenure in office, prompting criticism of racism, including from some local officials defending their home.

Trump's handling of the 2017 storm, which devastated the island and killed nearly 3,000 people in its aftermath, has been widely criticized by locals and experts. Trump has consistently denied any fault for his administration, and has instead sought praise for his handling of Hurricane Maria, at one point calling it "an incredible, unsung success."

Trump was lambasted for his visit to Puerto Rico weeks after the storm, where he was pictured tossing paper towels to a crowd of survivors.

Since then, he's publicly slammed local officials, falsely railed against what he said was an overreported death toll, and questioned aid to the territory. Former acting Homeland Security Secretary Elaine Duke, who was in the role as the hurricane hit, said in a July interview that Trump considered the idea of selling the island after the storm hit.

Tensions between the President and the island boiled over in March 2019 when then-Puerto Rican Gov. Ricardo Rosselló fired back after the White House officials warned his top aides that representatives of the territory were pushing too hard to arrange a meeting with the President aimed at discussing the island's dire situation.

"If the bully gets close, I'll punch the bully in the mouth," Rosselló told CNN at the time. "It would be a mistake to confuse courtesy with courage."

And as Hurricane Dorian approached Puerto Rico in August 2019, Trump again trained his ire at its government.

"Puerto Rico is one of the most corrupt places on earth. Their political system is broken and their politicians are either Incompetent or Corrupt. Congress approved Billions of Dollars last time, more than anyplace else has ever gotten, and it is sent to Crooked Pols. No good!" he wrote, adding, "And by the way, I'm the best thing that's ever happened to Puerto Rico!"

"Federal funding of $9.6 billion will allow the Puerto Rico Electrical Power Authority to repair and replace thousands of miles of transmission and distribution lines, electrical substations, power generation systems, office buildings and make other grid improvements. The $2 billion grant for the Puerto Rico Department of Education will focus on restoring school buildings and educational facilities across the island," McEnany said.

The grants, she added, "exceed the total Public Assistance funding in any single federally declared disaster other than Hurricanes Katrina and Sandy."

This story has been updated with remarks from Trump.