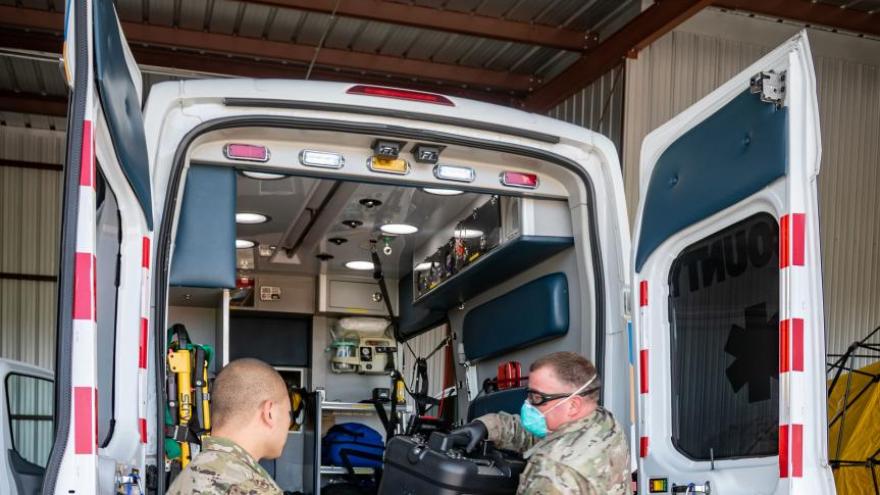 Members of the West Virginia National Guard perform COVID-19 decontamination of first responder apparatuses with an Aerosolized Hydrogen Peroxide system at Yeager Airport, Charleston, West Virginia, April 14, 2020. More than 250 apparatus belonging to Emergency Medical Services (EMS), police, and fire department medical units throughout the Kanawha County, West Virginia area are scheduled to be sanitized with this method in the next few days to ensure both employee and patient safety in an innovative and scalable effort to combat the ongoing global pandemic.

(CNN) -- States, on the cusp of another deadline, are waiting for the Trump administration to decide whether National Guard deployments to assist with the coronavirus response will be extended past August.

In late May, President Donald Trump extended federal funding for National Guard deployments until mid-August, saying at the time the extension would help "states succeed in their response and recovery efforts."

The virus is still surging across the US with the number of cases now at more than 4.4 million and the death toll at more than 152,000, according to data from Johns Hopkins University.

Governors are urgently requesting that the administration continue the deployments amid an emphasis on coronavirus testing. "The National Guard remains a critical part of our emergency health response, and we need the administration to grant this extension no later than Friday," Maryland Gov. Larry Hogan said on Twitter Tuesday.

A Defense official said an extension is "something that's under discussion, but hasn't happened yet. We do expect it to happen -- just not sure when." The White House declined to comment.

Without a commitment from the administration, states will need to start making other plans to continue the National Guard's efforts.

"If they drag this out, they're putting National Guard members and states through unnecessary work," a state official told CNN. "We have no choice but to go forward with the presumption that it won't be extended."

Title 32 status provides federal funding for the National Guard deployments across the country while allowing those forces to remain under the control of state governors as they help with staffing community-based testing sites, building test kits, among other activities.

There are some 46,000 National Guard members supporting state coronavirus response efforts at the direction of state governors.

The concern among states is that if they don't hear from the administration before the weekend, they'll have to start training National Guard members to move the mission to state status in the event that the administration doesn't extend the deployments, the state official said.

Calls for an extension date back to earlier this month. On July 13, Washington Gov. Jay Inslee sent a letter to Defense Department Secretary Mark Esper calling for an extension through the end of the year.

"Currently, more than 1,000 Citizen-Soldiers and Airmen are assisting with critical missions that keep our food banks operational and our neighbors fed," Inslee wrote. "They are critical to our efforts to slow the spread of the virus by supporting COVID-mapping missions, assembling test kits, and operating community-based test sites."

Earlier this week, Vice President Mike Pence outlined other ways the administration is helping streamline the testing process and reduce the wait time to get results.

Pence also said that the federal government is working to backfill medical professionals in hard hit states with military doctors and nurses and he encouraged the governors to reach out if they needed help in that vein.

"We are working to surge military medical personnel to Texas, Florida, Arizona and California. We're working and examine assessment team on the ground in Louisiana, and FEMA," Pence said, adding: "we're here to help, that there's a number of steps that they can take first, including using federal resources that could get medical workers into their hospitals into their healthcare facilities."

But whether states will receive federal help with National Guard deployments remains in question.