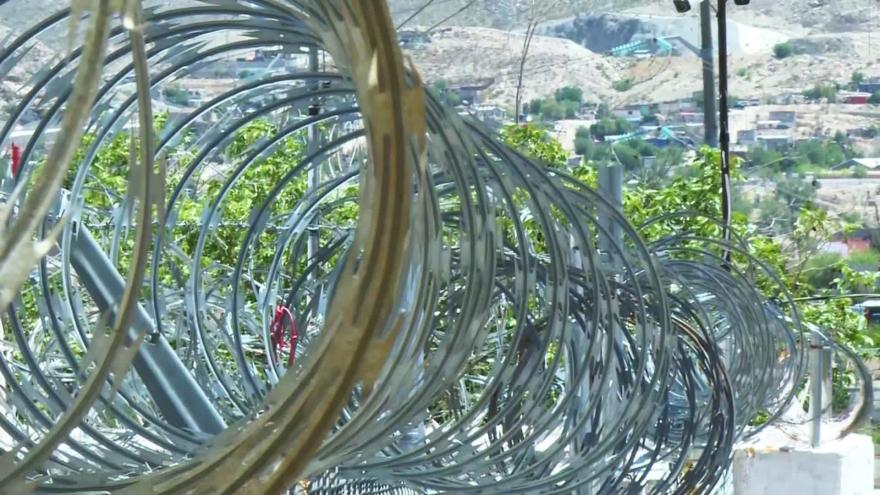 The Trump administration filed a regulation that could dramatically limit the ability of Central American migrants to claim asylum if they enter the United States by land through Mexico, according to a document filed by the Departments of Justice and Homeland Security in the Federal Register.

(CNN) -- The Trump administration on Monday moved to dramatically limit the ability of Central American migrants to claim asylum if they enter the United States by land through Mexico, the latest attempt by the White House to limit immigration and toughen the US asylum process amid overcrowded conditions at border facilities.

The rule from the departments of Justice and Homeland Security would prohibit migrants who have resided or "transited en route" in a third country from seeking asylum in the US, therefore barring migrants traveling through Mexico from being able to claim asylum and as a result, drastically limit who's eligible for asylum.

Over recent months, there's been a dramatic spike in apprehensions at the US-Mexico border. The majority of migrants are from the Northern Triangle countries of Guatemala, Honduras, and El Salvador. They've had to travel through Mexico to reach the border and upon arriving in the US, some have turned themselves into the US Border Patrol and claimed asylum.

The regulation addresses that group of migrants.

"Until Congress can act, this interim rule will help reduce a major 'pull' factor driving irregular migration to the United States," acting Homeland Security Secretary Kevin McAleenan in a statement. It will allow the departments of Justice and Homeland Security to "more quickly and efficiently process cases originating from the southern border, leading to fewer individuals transiting through Mexico on a dangerous journey."

There are some exceptions: an asylum seeker whose claim was denied after applying for protection in a country, if someone has been trafficked, and if someone transited through a country that did not sign one of the major international treaties on refugees.

The rule would take effect immediately but is certain to face legal challenges. The American Civil Liberties Union, which has filed challenges against other Trump administration policies, plans to "sue swiftly."

"The Trump administration is trying to unilaterally reverse our country's legal and moral commitment to protect those fleeing danger. This new rule is patently unlawful and we will sue swiftly," said Lee Gelernt, deputy director of the Immigrants' Rights Project of the ACLU, in a statement.

Under US law, migrants are allowed to claim asylum once on US soil. There's a caveat, however, for those who come through safe third countries, meaning countries that the US has entered into an agreement with. The United Nations' refugee agency defines "safe country," in part, as "being countries in which refugees can enjoy asylum without any danger."

But Trump's own statements on Mexico could undercut that definition. In tweets, the President has called Mexico "one of the most dangerous country's in the world" and claimed that the murder rate in the country has increased.

"The Coyotes and Drug Cartels are in total control of the Mexico side of the Southern Border. They have labs nearby where they make drugs to sell into the U.S. Mexico, one of the most dangerous country's in the world, must eradicate this problem now. Also, stop the MARCH to U.S." Trump tweeted in April.

Mexico's government rejected the new US asylum measures Monday. Mexico's Foreign Ministry said the measure by the US was "taken unilaterally," and "won't affect Mexican citizens," according to a statement.

The statement added the government of Mexico will "remain alert to the implications that this US decision could entail to those seeking asylum from other countries that enter through its southern border. In this sense, special attention will be paid to respect the principle of non-refoulement recognized by the current International Law."

The Trump administration has continued to implement a separate policy that requires some asylum seekers to wait in Mexico for the duration of their immigration proceedings. The policy, which was rolled out in January, was challenged in court, but the 9th US Circuit Court of Appeals allowed the administration to continue returning asylum seekers to Mexico for the time being.

The panel, while split on some issues, listed a number of factors that went into the decision, including risk of injury in Mexico and negotiations between the US and Mexico.

The 9th Circuit has blocked other administration attempts to restrict asylum, though.

Late last year, the administration tried to bar migrants who illegally cross into the US through the southern border from seeking asylum outside of official ports of entry. A federal judge in California quickly blocked the order, and the 9th Circuit agreed. The Supreme Court eventually upheld a federal judge's order blocking the new asylum restrictions last December.

The regulation filed Monday is part of a concerted effort by the administration to stem the flow of migrants by reforming asylum.

The Trump administration has also sought to sign a "safe-third country" agreement with Guatemala. Such an agreement would require migrants who pass through Guatemala to apply for asylum there, rather than continuing to the US. A planned Monday meeting between Trump and Guatemalan President Jimmy Morales, however, was called off.

Morales reportedly postponed the meeting until Guatemala's Constitutional Court hands down a ruling on the agreement, according to a statement released on the country's verified twitter account on Sunday.