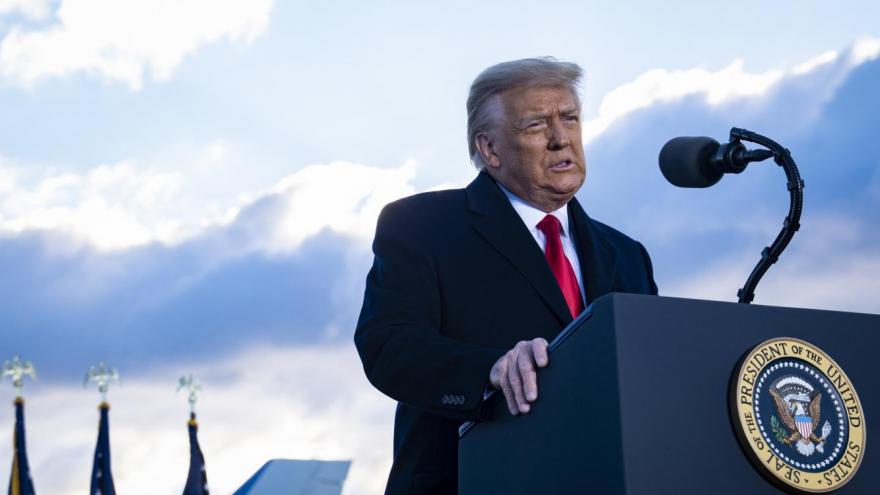 (CNN) -- Former President Donald Trump has expanded his impeachment legal team by tapping a former prosecutor-turned-criminal defense lawyer, an addition that comes as Trump and his allies scramble to prepare a defense with less than two weeks until the Senate trial.

The addition of Deborah Barbier, a lawyer with a reputation for tackling high-profile, controversial clients, is the second attorney to join from South Carolina. Last week, Trump announced that Butch Bowers, an experienced political attorney who has represented numerous Republican elected officials, including former South Carolina Gov. Mark Sanford, would lead his legal team.

The all-South Carolina legal team has surprised some attorneys, even those in the Palmetto State, but it underscores the outsized influence of one of Trump's most loyal allies, Lindsey Graham, the state's senior Republican senator, who recommended Bowers to Trump. It also highlights the challenges Trump was experiencing in building a legal team as his previous lawyers have largely stepped away from him.

Barbier joined Trump's impeachment team Monday, according to an email sent by the chair of the South Carolina State Committee of the American College of Trial Lawyers, where Barbier is a member. The email, which was first reported by The Post and Courier, was confirmed by three lawyers. Barbier did not respond to CNN's requests for comment.

"He certainly could not do better than Debbie. She is an astoundingly capable, skilled, experienced criminal lawyer who is used of handling very high-profile cases with controversial clients. He could never do better than Debbie," said E. Paul Gibson, vice chair of the state committee, who confirmed the email.

Barbier spent 15 years as a federal prosecutor in South Carolina before eventually opening her own boutique criminal defense firm. Barbier has represented several high-profile clients, including a Republican consultant embroiled in a lobbying case and a friend of Dylann Roof, who was convicted in the 2015 shooting of nine people at the historic Emanuel African Methodist Episcopal Church in Charleston.

The appointment comes as Trump is struggling to build out his legal defense. In particular, loyalist Rudy Giuliani is not able to represent Trump since he spoke on January 6, whipping up the pro-Trump crowd before they stormed the US Capitol. Others who worked on Trump's previous impeachment team have declined to work on the second team.

Major law firms have also turned down the former president because of the stigma of the insurrection and out of concern they would lose clients, several lawyers told CNN.

"The big firms have too many clients who would say, 'We're going to take our business away from you.' I don't think Butch Bowers or Debbie Barbier have that concern," said Robert Foster, a partner with Nelson Mullins in Columbia, where Bowers was a former partner.

Trump's allies have recently approached Johnny Gasser and Greg Harris, two prominent criminal defense lawyers in Columbia, people familiar with the discussions said. Gasser, a former interim US attorney for South Carolina, and Harris, a former federal prosecutor, have worked closely with Barbier on the defense side.

Their possible additions would give a significant boost to the courtroom trial aspect of the impeachment proceeding, but Trump allies say they still need an attorney who's strong on constitutional issues.

Trump aides declined to comment Tuesday on the ongoing formation of the legal team.

Another looming question is whether Trump will pay the lawyers. Three attorneys who spoke with CNN said it was unclear if Trump was seeking to retain lawyers on a pro-bono basis and not pay them retainers or hourly fees. All three of those lawyers said they declined to join the defense team, at least in part because of that issue.

Graham on Tuesday referred questions about payment to Trump.

"You'll need to ask them that. I'm sure they're getting paid."

Foster said the legal community is buzzing about who else may join the impeachment defense. When news broke late afternoon on Monday about Barbier's appointment, he said, "Our first thought was, 'What is it about South Carolina?' "

Foster said the response to the email announcing Barbier's hiring was unsurprisingly mixed.

"They were overwhelmingly congratulating her because of her stellar reputation. They were overwhelming in that regard, they were split as to a lot of other issues," said Foster. "Just as with anything else with Trump you're going to have 51% of the people on one side and 49% on the other side."

CORRECTION: An earlier version of this story misspelled the first name of convicted killer Dylann Roof.