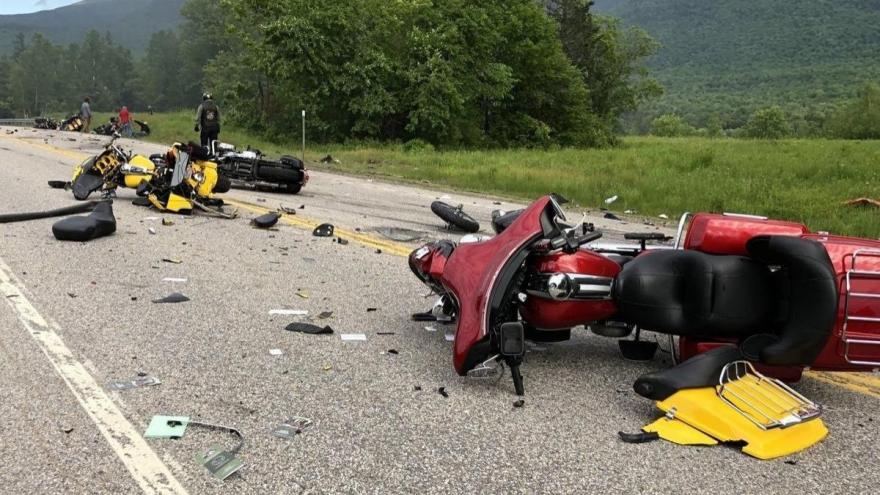 The driver of a pickup involved in a crash that killed seven motorcyclists in New Hampshire has been arrested and faces seven counts of negligent homicide, officials said Monday.

(CNN) -- The driver of a pickup involved in a crash that killed seven motorcyclists in New Hampshire is expected to be arraigned on seven counts of negligent homicide Tuesday.

Volodymyr Zhukovskyy, 23, was arrested at his home in West Springfield, Massachusetts, and taken into custody on a "fugitive from justice" charge Monday, according to a news release from Deputy Attorney General Jane E. Young's office.

He pleaded not guilty to that charge at arraignment Monday in Springfield District Court.

Massachusetts State Police said Zhukovskyy could also be charged with possessing illegal narcotics, the agency's lab is testing wax packets containing suspicious residue that were recovered from his home.

Zhukovskyy was taken into custody by New Hampshire officials after Monday's arraignment, according to WGGB.

He is expected to appear in New Hampshire Tuesday where he faces seven counts of negligent homicide, according his attorney Donald Frank.

Zhukovskyy's attorney Donald Frank spoke to CNN affiliate WGGB Monday and described his client as a "good guy involved in a terrible, negligent, as I read the complaint, negligent incident."

Frank told WGGB that his client spoke with authorities in New Hampshire after the accident and was told he was allowed to leave the state. Frank said that Zhukovskyy planned on returning to New Hampshire in July to answer to the charges before the warrant for his arrest was issued.

Seven motorcyclists were killed and three others injured on Friday when they hit Zhukovskyy's truck, which was going the opposite direction, police said.

Among the victims were members of the Jarheads Motorcycle Club, including some Marine veterans and their spouses.

Zhukovskyy was working as a driver for a transportation company based in Springfield, Massachusetts, at the time of the accident and was the sole occupant of the pickup, Coos County Attorney John McCormick said Saturday.

Dartanyan Gasanov is the principal of Westfield Transport Inc., according to licensing records. Gasanov said the wreck occurred during Zhukovskyy's second trip with the company, on the third day of his 30-day trial period.

"It's a huge tragedy. It's really hard to talk now. ... He came out of nowhere and ruined my life. I've never experienced anything like that," he said, adding that he extends his condolences to the grieving families.

State police collision analysis and reconstruction teams are investigating the crash, along with local police, the Coos County Attorney's Office and the National Transportation Safety Board.

CORRECTION: An earlier version of this story incorrectly reported on what charges Zhukovskyy was arraigned Monday. He was arraigned in Massachusetts on a "fugitive from justice" charge. Another arraignment is scheduled for Tuesday in New Hampshire on the negligent homicide charges.