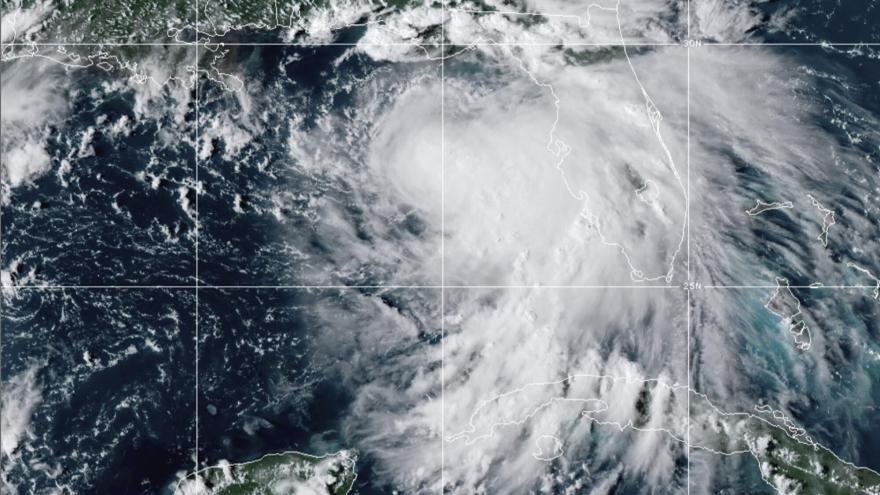 Sally is scheduled to hit Louisiana as a category 1 hurricane.

(CNN) -- Hurricane Sally strengthened into a Category 2 storm on Monday, and there's a chance it will make landfall in southeastern Louisiana, a state still recovering from the aftermath of Hurricane Laura.

The center of Sally is expected to move near the southeastern Louisiana coast Monday night and make landfall on the Gulf Coast late on Tuesday, possibly as a Category 3 hurricane, the National Hurricane Center said. The storm appeared to shift east early Monday, placing Mississippi's and Alabama's entire coasts under a hurricane warning.

Further strengthening is expected in the next 24 hours before the storm makes landfall, the NHC said.

"Sally could approach major hurricane strength," the NHC said, adding that the storm's wind speeds have increased by at least 40 mph in just a 12-hour period, a process called intensification.

A Monday evening update showed the storm about 135 miles southeast of Biloxi, Mississippi.

The storm had 100 mph winds, but of more concern is its sluggish final approach, forecasters say.

"Since Sally is forecast to be moving very slowly around the time of landfall, a slower rate of weakening is indicated since a large portion of the circulation will remain over water for some time," the National Weather Service said.

President Donald Trump approved emergency declarations for Louisiana and Mississippi, the White House said. This means Trump authorized the Department of Homeland Security and Federal Emergency Management Agency (FEMA) to assist with all disaster relief efforts in the two states.

During a briefing, the governor said he feared his state would bear the brunt of Sally's rain and storm surge, and he urged residents to prepare for prolonged power outages. Shelters are opening for evacuees, he said.

Alabama and Mississippi get ready

Officials were handing out sandbags in Saraland, Alabama, north of Mobile, while residents on Dauphin Island, a barrier isle on the Alabama coast, were also preparing for flooding, CNN affiliate WALA reported.

"We're lucky enough to live in the center of the island, so it's not hopefully gonna be too bad for us," Ryan Gieselman told the station. "I hope it really just misses us and we can go on with the rest of our summer and enjoy it, but if it hits us, just be prepared and be ready to hunker down."

Gov. Kay Ivey issued a state of emergency for Alabama and closed all beaches as of 3 p.m. (4 p.m. ET) Monday. She further recommended evacuation, especially for nonresidents and those in low-lying or flood-prone areas.

"Bad weather is nothing to take lightly," she said in a statement. "You have my assurance that every resource will be available if we need it. Be safe, Alabama."

Coastal areas between eastern Louisiana and western Florida could see anywhere between 1 and 8 feet of storm surge, though the coast between the Mississippi River and Ocean Springs, Mississippi, east of Biloxi, could witness up to 11 feet, the National Hurricane Center forecast.

Mike Taylor and his nephew Matthew Forehand were filling sandbags to take home in Long Beach, Mississippi. Taylor lost his home 15 years ago during Hurricane Katrina and told CNN he feels he's experienced the worst storm, so he wasn't too nervous about Sally. But he continues to prepare.

Matthew, on the other hand, was very nervous about the storm. "The storm is coming at night and the wind can blow your house down," he said.

In Gulfport, Mississippi, hardware and grocery stores are stocked, but at least one store manager said he isn't seeing the normal crush of customers stocking up on plywood and other wares, according to CNN affiliate WLOX.

"I think a lot of the folks were still stocked up when Marco and Laura come up because it was a near miss, but a lot of folks got prepared for that," said Bill Collins, who manages a hardware store in Gulfport.

Resident Al Ward was grabbing propane tanks in case he needs to do his cooking outdoors once the storm passes, he said.

"I'm doing what everybody else that has any sense would do," Ward told the station. "I'm being prepared for the worst and hoping it will be as it has been earlier this year. We dodged the bullet."

Shelters are also preparing for the incoming storm, but are keeping Covid-19 in mind. The Mississippi State Medical Needs Shelter opened Monday, but will only be operating at half capacity, with socially distanced medical-grade cots, the state's health department announced.

Only one caregiver will be allowed to accompany a resident inside the shelter and residents are asked to bring a mask. If they do not have a mask, one will be provided.

Statewide, the Mississippi Gaming Commission orderd the 12 casinos on the Gulf Coast to evacuate all patrons and close, which must be done by 5 p.m. local time, according to a press release from the commission.

Though most of Louisiana is no longer expected to face a direct hit, "an extremely dangerous and life-threatening storm surge is expected" in the southeast portion of the state, especially from Port Fourchon eastward, the hurricane center warned.

Venetian Isles, Lake Catherine and Irish Bayou, which are not protected by substantial levees, could see storm surge of up to 11 feet, NOLA Ready, the city's emergency preparedness network, said in a tweet.

New Orleans' 99 drainage pumps, critical to staving off street flooding, are fully operational, according to the city's Sewerage and Water Board, which activated its emergency operations center. The city has also signed an emergency declaration and is distributing sandbags.

"You should be gathering your emergency supplies, three days' worth," Collin Arnold, director of the New Orleans Office of Homeland Security and Emergency Preparedness, warned.

Officials "have every reason to believe that this storm represents a very significant threat to the people of Southeast Louisiana," Edwards said, adding he has spoken to President Donald Trump and is submitting a pre-landfall federal declaration request.

The Federal Emergency Management Agency has approved assistance for 21 parishes impacted by Laura, according to a news release issued by the governor's office.

"The bottom line continues to be that Sally is expected to be a dangerous slow-moving hurricane near the coast of southeastern Louisiana, Mississippi and Alabama during the next 2-3 days," the National Hurricane Center warned.

It carried the same force as a storm from more than 150 years ago, the strongest to ever strike the state. Laura also destroyed power grids, and repairs are anticipated to take weeks, if not months, officials said.

Almost 80,000 homes remain without power in southwest Louisiana as of Monday morning. At Laura's peak, more than 800,000 customers lost electricity.

Sally was one of five tropical cyclones in the Atlantic on Monday -- a phenomenon that's happened only once before, almost 50 years ago.