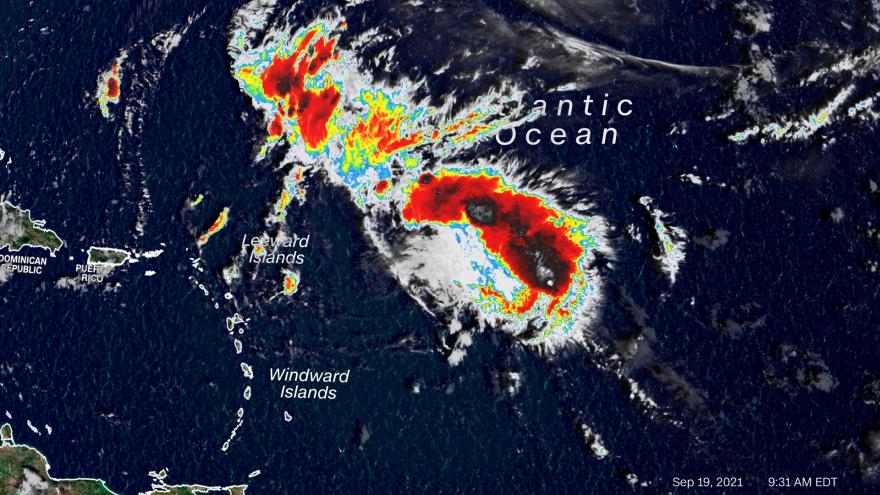 (CNN) -- This year's busy tropical season continues as more activity ramps up in the Atlantic.

Tropical Storm Peter is the 16th storm of the 2021 Atlantic hurricane season. Peter strengthened into a storm Sundaymorning from a tropical depression.

Located hundreds of miles northeast of the Leeward Islands, Peter had sustained winds of 45 mph on Sunday morning.

Hurricane hunters observed the center of the storm to be farther southwest than in the previous National Hurricane Center (NHC) advisories, but its impacts to land are still expected to be minimal as it remains in the open waters of the Atlantic.

"Some strengthening is forecast during the next 24 hours or so as Peter moves over warmer sea-surface temperatures," the National Hurricane Center said.

Currently no tropical watches or warnings are in effect, but the storm could bring flood threats to parts of Puerto Rico, the Virgin Islands, and the Northern Leeward Islands early this week.

"Rainfall around the southern periphery of Tropical Storm Peter may lead to areas of urban and small stream flooding from late Sunday into Tuesday," according to the NHC.

By the middle of the week, the storm is expected to experience slow weakening as it enters a more unfavorable environment.

The current forecast track for Peter indicates a northward turn around Wednesday, minimizing the storm's impact on land as continues to meander across the Atlantic by the end of the week.

Some coastal areas of the eastern US could have rip currents this week due to waves propagating hundreds of miles away from the storm.

A second tropical system forms in the Atlantic

Trailing behind Peter across the Atlantic, another disturbance has made its way off the coast of Africa.

"The small low pressure system that the NHC has been tracking the past few days has acquired a well-defined circulation and enough organized deep convection to be classified as a tropical depression," the NHC said Sunday morning.

Tropical Depression Seventeen is forecast to track northwestward into the mid-Atlantic throughout the week, strengthening into a tropical storm on Sunday or Monday.

If it becomes a tropical storm, it will be named Rose.

After midweek, the disturbance will weaken as it heads out to sea.