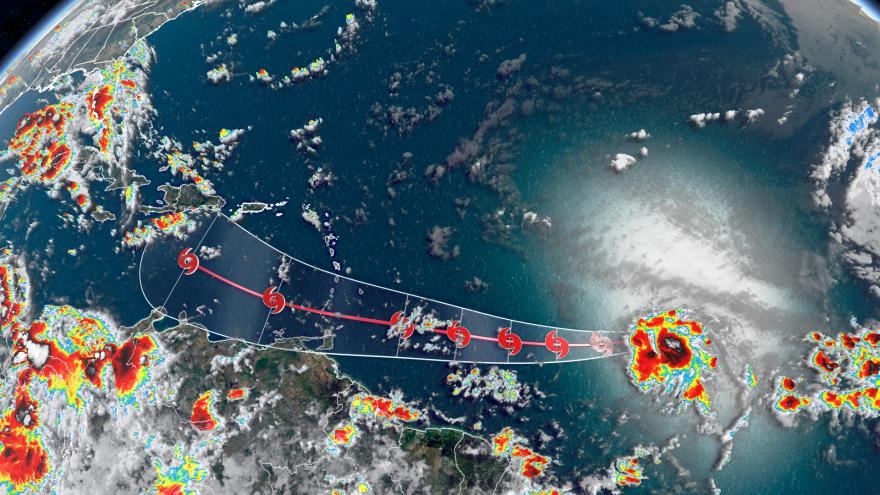 The storm was around 1,250 miles east of the southern Windward Islands on Wednesday morning, packing winds of 45 mph and moving to the west-northwest at 12 mph.

"Given the increased organization of the system and its small size, Gonzalo's (pronounced gohn-SAH-loh) likelihood of becoming a hurricane is rising. Small storms are prone to more significant fluctuations in intensity, both up and down," CNN meteorologist Taylor Ward said.
Strengthening will continue in the next day as the storm is expected to become the season's first hurricane by Thursday, the NHC said.

The NHC is forecasting the storm will weaken slightly before moving over the Windward Islands. The storm may even fizzle after it moves over the islands, as many models are indicating, or it could continue to intensify into next week. It's still a little too early to tell exactly what it will do after it moves into the Caribbean.

Get the latest weather news from CNN's team of meteorologists

This is the earliest that a storm has received a name starting with the letter "G" since the United States began using a named-storm system in 1953. On average the 7th named storm in a season is on September 16.

The previous record for the earliest 7th named storm formation in the Atlantic was Gert on July 24 during the busiest hurricane season on record, 2005.

"While 2020 may beat 2005 to the 7th named storm, 2005 had already had 3 hurricanes and 2 (of those were) major hurricanes (Dennis and Emily) by July 21. 2020 has yet to have a named storm reach hurricane strength," tweeted Philip Klotzbach, a research scientist at Colorado State University.

So far in July, he said, the ingredients needed for an active season remain in place.

"So, while we haven't seen any hurricanes yet, I certainly think that we will soon."

The active part of hurricane season is still a few weeks away and it looks likely we will have the busy season experts have been predicting.