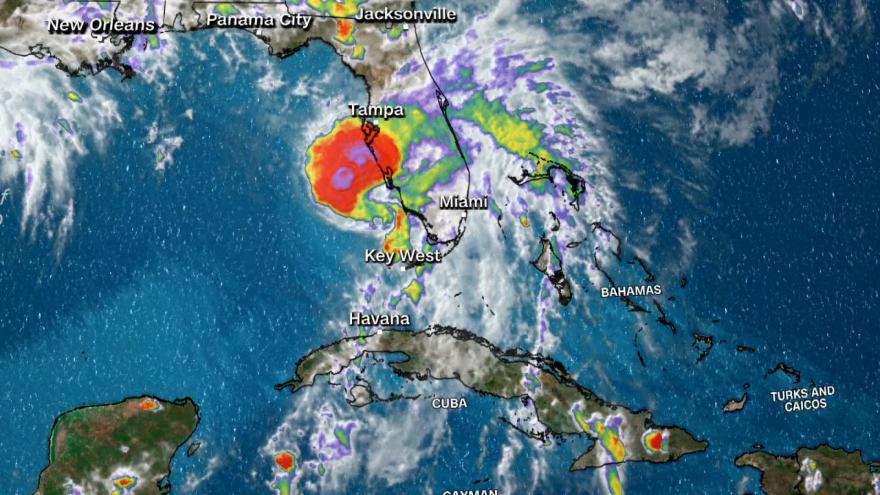 (CNN) -- Tropical Storm Elsa is heading inland over north Florida toward southern Georgia on Wednesday afternoon, battering the area with heavy rain and threatening wind damage and flooding as it moves north.

Having already caused flooding in west-central Florida, Elsa made landfall in north Florida's Gulf Coast in Taylor County late Wednesday morning, and is on a path to pound parts of Georgia into Wednesday evening with tropical storm strength.

It is expected to weaken to tropical depression by Thursday, when it reaches the Carolinas before heading to the mid-Atlantic coast. Elsa "will likely become a tropical storm again" on Friday as the center moves along or just off the eastern seaboard where it could threaten New York City and Boston on Friday, according to the NHC.

A few dozen miles from landfall, part of a roof's surface had been lifted from a motel on Florida's Cedar Key on Wednesday, photos taken by motel guest Jonathan Riches showed.

"Winds starting howling in the middle of the night, and rain starting pounding the windows," Riches told CNN, adding about the conditions: "Never seen anything like this before in my life."

Roads were flooding late Wednesday morning in the Taylor County town of Steinhatchee, not far from where the storm came ashore, CNN affiliate WCTV reported.

"We've had a lot of rainfall this past month. If you get winds at 40 mph or 50 mph, some of these trees are going to be falling down," Meyers said.

That snapped trees and blew away a home's deck and fence, CNN affiliate WJXT reported.

More than 25,000 utility customers in Florida were without power early Wednesday afternoon, according to utility tracker PowerOutage.us.

Roads also were flooding Wednesday morning in parts of southwestern Florida, where Elsa's outer bands still were dropping rain. This included the Fort Myers area, where some roads were impassable, the National Weather Service said.

More than 4.9 million people were under a tropical storm warning across parts of Florida, Georgia and South Carolina on Wednesday afternoon. A tropical storm watch has also been issued up north in parts of New York, Connecticut and Massachusetts.

Elsa will have generally dropped 3 to 9 inches of rain in western and northern Florida by storm's end -- though up to 12 inches had fallen north of Port Charlotte by Wednesday morning, the National Weather Service said.

Counties and utilities prepare ahead of storm

As Elsa approached, Jacksonville Mayor Lenny Curry urged residents to be cautious, since flooding and wind damage were possible.

"We don't want people to get overconfident" and drive into any flooding or miss any downed power lines, Curry told CNN Wednesday.

Florida Gov. Ron DeSantis expanded his state of emergency declaration Tuesday to include 33 counties as local, state and utility resources prepared for the storm.

The Florida National Guard has activated 60 guardsmen and is prepared to activate more for storm-related operations such as high-water rescues or humanitarian assistance, it said.

Duke Energy, which serves 1.8 million customers in Florida, was preparing for outages, according to its website.

It had staged 3,000 utility "crew members, contractors, tree specialists and other personnel" from Pinellas County to north Florida, the utility said Tuesday in a news release. Additional line workers and support personnel were also brought in from the Carolinas, Indiana, Kentucky and Ohio, according to the release.

The University of Florida in Gainesville canceled classes for Wednesday in anticipation of the storm, the university said.

Heading to Georgia and the Carolinas -- then up the East Coast

Elsa's center could maintain tropical storm strength into Wednesday evening, when it is expected to be in southern or middle Georgia, forecasters said.

Elsa could weaken to a tropical depression by Thursday morning, when it is due to be over South Carolina.

It then eventually will skirt along the mid-Atlantic coast -- and maybe even restrengthen into a tropical storm in the Northeast by Friday morning, the hurricane center said.

About 2 to 6 inches of rain are expected in portions of southeastern Georgia and the lowlands of South Carolina, with considerable flash flooding possible, the hurricane center said.

Roughly 1 to 5 inches of rain are possible in coastal portions of North Carolina and southeastern Virginia through Thursday night, according to the hurricane center.

Though Elsa's most intense effects are being felt in western Florida, outer bands also sent rain and winds to parts of the state's eastern side.

In the southeastern Florida community of Surfside, crews intended to continue a search and rescue operation at the site of a deadly condo collapse unless wind gusts rose above 45 mph, a fire rescue spokesperson said.

Elsa also lashed the Florida Straits and the Florida Keys earlier this week. A boat from Cuba carrying 22 people capsized Monday night more than 20 miles off Key West. By Wednesday, 13 were rescued and nine still were missing, the US Coast Guard said.