Barry moves deeper into Louisiana with more rain on the way 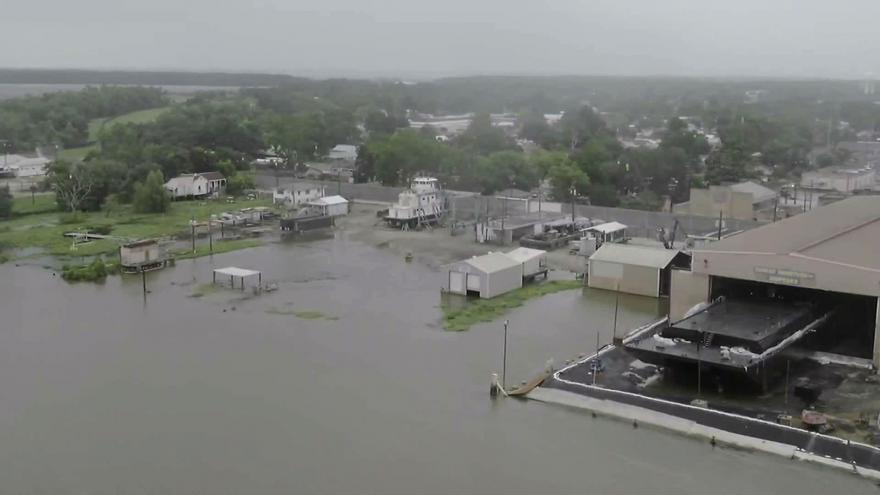 The storm was briefly upgraded to a Category 1 hurricane Saturday morning but quickly weakened to a tropical storm when it made landfall near Intracoastal City, Louisiana, later in the afternoon. By Saturday night, it was crawling north-northwest at 8 mph, with maximum sustained winds of 60 mph, according to the National Hurricane Center.

In St. Mary Parish, about 60 miles east of where Barry made landfall, 64-year-old Joyce Webber and about 20 others huddled inside the Baldwin Community Center to take refuge from the storm. Some of them relaxed on cots, paging through books, while parents tried to keep their children entertained.

Webber, a cook at a Cajun restaurant, had just found out a large tree branch had fallen on her mobile home and her storm door had blown off.

"Trailers don't hold, no matter what type of storm," she told CNN. "They just don't hold."

But she could see the silver lining. "It's good to see your neighbors here," Webber said. "The blessing is coming together. It feels like a family in times like these."

Sandra Walker, 62, was one of the first people to arrive at the Felton G. Clark Activity Center in East Baton Rouge, the largest shelter in the area. Walker has a broken leg and said she lives by a river where the water has been high since Independence Day.

"I'm scared of the floodwaters. ... I'm right down by the river," Walker said. "I didn't take any chances, I just came out."

Barry was forecast to continue moving inland through Saturday night, the hurricane center said, and it was expected to weaken further into a tropical depression on Sunday.

Tropical storm-force winds extended up to 175 miles outward from the storm's center, but the rainfall always posed the greatest threat. Barry's slow trek north means residents through the lower Mississippi Valley will see extended periods of rainfall that could prompt heavy flooding. And there's plenty of rain on the way, according to CNN meteorologist Chad Myers.

"Ninety-five percent of this storm is still in the Gulf of Mexico," Myers said Saturday evening. As the storm continues to move north, more of the system will hover over land. "And that's where the rain is going to come from."

The effects of the storm were already being felt in communities along the Louisiana coast Saturday.

Levees were overtopped Saturday in Plaquemines Parish, southeast of New Orleans, where mandatory evacuations were put in place for residents of low-lying areas earlier this week.

Footage from local authorities showed water inundating fields as it spilled over the side of the levee, which Louisiana Gov. Jon Bel Edwards said was a back levee near Myrtle Grove, and not a levee for the Mississippi River.

"We actually anticipated that the back levee would be overtopped," he added, "so we are not surprised by what has happened."

The overtopping occurred in multiple locations, but in less populated areas of the parish, according to Kirk Lepine, the president of Plaquemines Parish. There was a concern, he said, that Highway 23 could become covered in water and that residents who had not left the area would become trapped.

"The entire street and area under the house was under water," Torri said.

"We're stuck in the house with four kids, and the car is almost flooding," he added, noting that within an hour and a half, the water had risen a foot. "The wind's getting stronger and the water is rising and rising."

The National Hurricane Center Saturday evening was still warning residents of the coast that they could see a dangerous storm surge. There were storm surge warnings in effect for everyone from Intracoastal City, Louisiana, to Biloxi, Mississippi, and for Lake Pontchartrain.

'Stay vigilant and be safe'

State, local and federal officials have spent days preparing for the storm and possible impacts and continued to emphasize their readiness after Barry made landfall.

Mandatory evacuation orders were issued across the region in low-lying areas and those outside public levee protection, according to the governor's office, while some areas had voluntary evacuation warnings.

Evacuation orders were still being instituted as late as Saturday afternoon. At that time, 330 households along Highway 315 and Brady Road were put under mandatory evacuation orders in Terrebonne Parish, parish spokesman Mart Black told CNN. It was unclear how many residents would be impacted.

Officials in Lafourche Parish also posted a recommended evacuation notice for parts of the parish, due to overtopping of the levee system in Point Aux Chenes. The recommendation followed a prior mandatory evacuation for areas south of the Leon Theriot Flood Gate on Friday night.

Officials are also working to keep evacuees with their pets. Michael Gene Strain, the state agriculture and forestry commissioner, said that during Hurricane Katrina a lot of people didn't evacuate because they couldn't bring their pets.

"As a result, instead of an evacuation, it became a rescue mission. And we lost a number of people. People died because they would not leave," Strain said.

That was almost the case with Ollie Jordan, 72, and his wife Hazel, 70, who evacuated from their trailer in Baker, Louisiana. The couple walked a rainy mile to a shelter at a middle school in Baton Rouge, but were told they couldn't bring their two cats and Lucy, their 6-year-old dachshund-Chihuahua mix. They ultimately found the Felton G. Clark Activity Center, where the mobile Disaster Pet Shelter is based.

"What we have found is that both the humans and the animals, their peace of mind is much better when they're with their pets," Strain said. "It has made a remarkable difference for the people that have had to evacuate to be able to be there with there pets. And its the right thing to do, its the humanitarian thing."

According to Gov. Edwards' office, nearly 3,000 National Guards troops had been deployed throughout the state for potential storm response, and the Louisiana Emergency Operations Center remains fully active and staffed around the clock.

"This storm has our attention," Edwards said in a statement Saturday. "While most of the rain right now is in the Gulf, we know that it will be coming ashore and impacting a large portion of the state. We are asking that everyone stay vigilant and be safe."

"The people of Louisiana are resilient," he added, "and while the next few days may be challenging, I am confident that we are going to get through this."

Though heavy, sustained rain still threatens the New Orleans area, fears among residents and forecasters there relaxed as a predicted storm surge on the unusually high Mississippi River happened late Friday at a lower level than anticipated, according to the National Weather Service in New Orleans.

Officials warily eyed the Mississippi River early this week, when forecasts showed a potential storm surge of 2 to 3 feet could push the waterway's height to about 19 feet in New Orleans, frighteningly close to the top of levees that protect up to 20 feet.

Those fears have calmed since late Friday, when the surge crest pushed the river to only 16.9 feet. Heavy rain is predicted to push the river level up again Monday, but only to 17.1 feet, forecasters said.

Mayor LaToya Cantrell continued to urge caution on Saturday afternoon, telling residents the impacts of the storm would be felt into Sunday.

"This means that New Orleans residents are not out of the woods with this system," she said in a statement. "While the storm surge risk on the Mississippi River has passed, the primary risk of heavy rain remains in New Orleans.

In Morgan City, about 55 miles east of where the hurricane made landfall and 70 miles southwest of New Orleans, officials and city workers were also worried about lingering water.

With up to 30 inches of rain projected this weekend for the region, Morgan City Mayor Frank "Boo" Grizzaffi worried it may be more than the city's drainage system can take, so the city contacted the state and got additional pumps to help tackle the deluge.

"Our city can handle the first 5 inches comfortably," he told CNN, standing along the seawall Saturday morning. "After that, 1 inch every additional hour. So, when you've got a forecast of 30 inches, the math doesn't work."

But Grizzaffi was confident the city could handle whatever Barry throws its way.

"There's a lot of rain coming. Someone's going to get it," he said. "We're prepared for it if it comes this way."