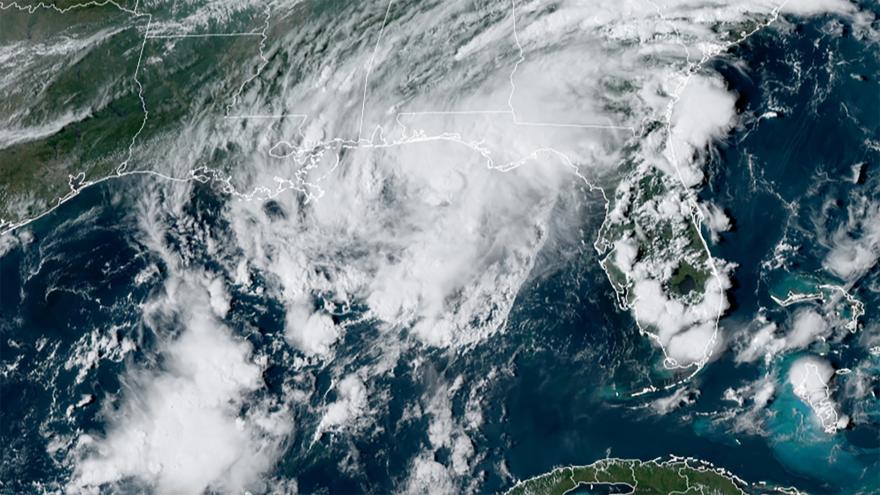 (CNN) -- Tropical Depression Mindy was dropping heavy rain on southern Georgia and parts of South Carolina on Thursday morning and could produce scattered flash flooding and a few tornadoes as it pushes to the coast, forecasters said.

Mindy, which formed in the Gulf of Mexico on Wednesday afternoon and made landfall over the Florida Panhandle's St. Vincent Island that night, had weakened to a tropical depression by the time it reached southern Georgia on Thursday morning.

Centered dozens of miles east of Valdosta, Georgia, just across the Florida state line, Mindy had sustained winds of 35 mph as of 5 a.m. ET, the National Hurricane Center said.

It is expected to move over the Atlantic Ocean and continue out to sea later Thursday.

Heavy rain is expected to be the primary threat. Flash flood watches were in effect Thursday morning for portions of the Florida Panhandle and southern Georgia.

The storm could drop 2 to 6 inches of rain in parts of southern Georgia and coastal South Carolina through Thursday morning, which could lead to scattered flash, urban and small stream flooding, the hurricane center said.

Gusts of tropical-storm force -- at least 39 mph -- may happen near Mindy's center across parts of southeastern Georgia in the morning, the hurricane center said.

"A tornado or two is possible over portions of north Florida and far south Georgia" through Thursday morning, according to the hurricane center.

Because the system developed so close to land, Mindy had limited time for intensification.