Trickles of Ukrainians escape, but millions more are trapped in dire conditions 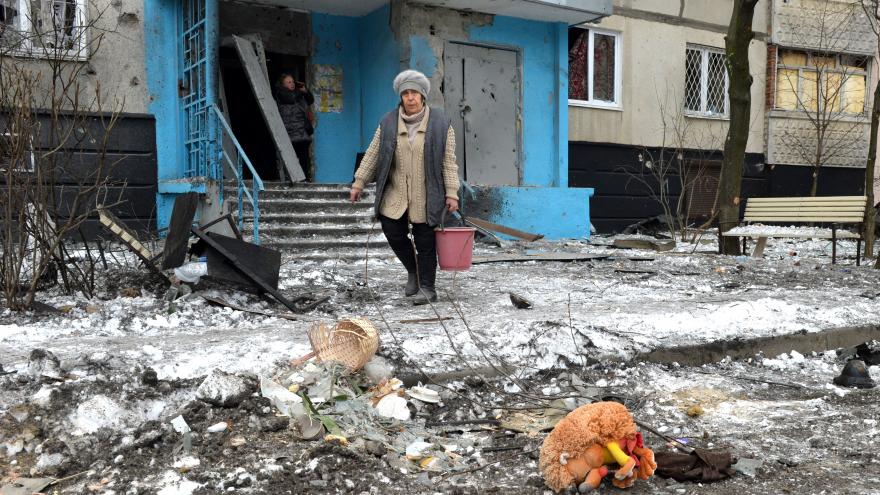 (CNN) -- A tiny trickle of refugees have managed to flee Ukrainian cities under attack from Russian forces, but concerns are mounting for millions of people who remain trapped amid worsening conditions.

On Wednesday, Ukraine's Deputy Prime Minister Iryna Vereshchuk said both sides had agreed to a ceasefire and planned evacuation corridors from a number of cities in order to allow people to leave.

The corridors will operate from 9 a.m. to 9 p.m local time, and routes include Energodar to Zaporizhia; Mariupol to Zaporizhia; Volnovakha to Pokrovsk; Izium to Lozova; and four separate routes from Vorzel, Bucha, Irpin, Borodyanka, and Gostomel to the capital city of Kyiv.

A corridor will also operate between Sumy and Poltava, a route that enabled about 5,000 Ukrainians to evacuate on Tuesday, according to Ukrainian Presidential Office Deputy Kirill Timoshenko.

But several hours after the evacuation was due to begin, there was no sign of people being brought out of Vorzel, Borodyanka, Hostomel, Irpin and Bucha in the bus convoys that had been organized.

The city council of Bucha accused Russian forces of blocking the evacuation in a statement on Facebook.

"The occupants are disrupting the evacuation. Currently, 50 buses are blocked by Russian military in the parking lot," the post read.

In the east, it was impossible to evacuate civilians from the town of Izium "as we constantly hear explosions," said Oleh Syniehubov, administrative head of Kharkiv region.

However, greater progress appeared to be made in organizing buses to get people out of the central city of Enerhodar,as well as Irpin and Vorzel.

"The evacuation from the city continues," wrote Оleksandr Markushyn, mayor of Irpin, on Facebook. "There are buses in the center of Irpin. We are evacuating as many people as possible."

In Vorzel, all of the children that had been stranded in an orphanage have been evacuated, as has the local maternity hospital, according to Kyrylo Tymoshenko, an adviser in the president's office.

At least 2 million refugees have fled Ukraine since the beginning of the invasion, the UN estimates. But millions more remain trapped in towns and cities that have come under sustained attacks by Russian forces in recent days.

And on Tuesday Ukrainian Minister of Defense Oleksii Reznikov claimed more than 400 civilians have been killed, including 38 children, with the real death toll expected to be higher.

Reznikov accused Russia of "a real act of genocide" and "war crimes," claiming that Russian forces had even fired on the evacuation corridors.

Citizens of Mariupol being held 'hostage'

The strategic port city of Mariupol on Ukraine's southeast coast has been under siege for days and has been "isolated" by Russian forces, a senior US defense official said Tuesday.

Russia continues to bombard Mariupol and its troops are not inside the city "in any significant way," added the official.

On Wednesday the city council posted video of a devastated maternity hospital in the city and accused Russian forces of dropping several bombs on it from the air.

"The destruction is enormous," said the council. "The building of the medical facility where the children were treated recently is completely destroyed."

Residents have been cut off from water and electricity for days, and on Tuesday Ukrainian Foreign Minister Dmytro Kuleba accused Russia of committing war crimes by holding 300,000 civilians "hostage."

"The situation in Mariupol is desperate," Mirella Hodeib, spokesperson for the International Committee of the Red Cross (ICRC), told CNN on Monday.

The city of Kharkiv in northeastern Ukraine is encircled by Russian forces and continues to suffer heavy shelling, the UK Ministry of Defence tweeted Wednesday.

On Tuesday, Kharkiv Mayor Igot Terekhov told CNN the situation was "difficult" and there was "constant shelling from heavy artillery" on residential neighborhoods and civilian infrastructure.

"They're hitting our water and heating and gas supply," said Terekhov. "They're trying to interrupt our power supplies."

Terekhov said he regards indiscriminate shelling as "an act of genocide." He added that any aid or assistance would be gratefully received, and expressed hope about the ultimate outcome.

"I am absolutely confident that we will defeat the Russians," he added.

Russian forces also continue to bear down on the Ukrainian capital Kyiv, and on Tuesday the head of the Kyiv Regional Military Administration, Oleksiy Kuleba, said the humanitarian situation in areas around the city remains difficult.

"The main issue today remains humanitarian aid. Bucha, Irpin, Gostomel, Makariv, Borodyanka, Vorzel - residents of these settlements are forced to stay in bomb shelters for days without water and food. The occupiers do not give humanitarian corridors, do not give guarantees," Kuleba said, naming five districts to the north and west of Kyiv.

On Wednesday, these five districts were named among evacuation corridors agreed by Ukraine and Russia.

"Ukraine has been saying this to its partners from the first day of the war: If you don't close the skies, you will also be responsible for this catastrophe, a massive humanitarian catastrophe," he said.

The Ukrainian government has meanwhile announced that it will ban exports on key agricultural goods, including wheat, corn, grains, salt, and meat, after passing a cabinet resolution Tuesday.

Ukraine's minister of agrarian policy and food, Roman Leshchenko, said the steps had been taken "to prevent a humanitarian crisis in Ukraine" and "meet the needs of the population in critical food products."

US Vice President Kamala Harris is planning to meet Ukrainian refugees in Poland, on a trip that has been complicated by wrangling over a plan to provide fighter jets to Ukraine.

Kyiv is requesting the planes in order to better face the Russian invasion, and Poland has proposed transferring its Soviet-era MiG aircraft to Ukraine with the US acting as an intermediary.

But the proposal caught the Biden administration officials completely off-guard, and was rejected by the Pentagon.

Harris will discuss the thorny issue this week, senior administration officials said ahead of her departure.

"A number of people have had a variety of ideas and we think all of them are worth discussing and that's what we're going to continue doing," one official said.