Tribal health providers have figured out the key to Covid-19 vaccine success. Here's their secret 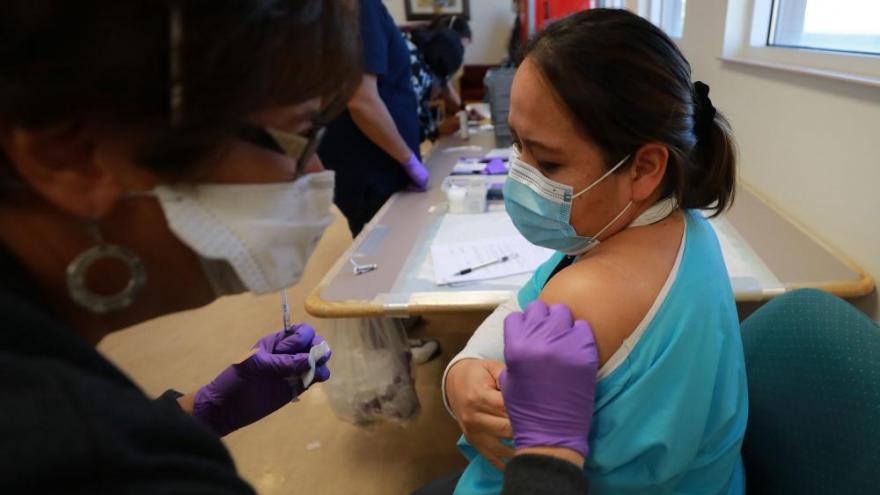 Medical staff at the Northern Navajo Medical Center administering Covid-19 vaccines in Shiprock, New Mexico. The Navajo Nation has a higher vaccination rate than most states.

(CNN) -- Native people have been disproportionately hit by Covid-19, experiencing higher rates of infection, hospitalization and death than White people in the US. But when it comes to vaccine administration, tribal health providers are often outpacing counties and states.

For the most part, the Covid-19 vaccine rollout in the US so far has been beset by long lines, glitchy websites and canceled appointments. Meanwhile, many tribal nations and health clinics have moved efficiently through their vaccine allotments and distribution phases -- with some already offering shots to Native people as young as 16.

"We have some real crushing challenges in Indian Country," said Stacy Bohlen, chief executive officer of the National Indian Health Board. "We have a perfect storm for a pandemic like this to really knock us down. But we are also very, very resilient people."

It's important to note that there are 574 federally recognized tribes, making it difficult to broadly characterize how the vaccine rollout is going across Indian Country. Native people get their health care from a patchwork system of Indian Health Service facilities, tribally-operated clinics and urban Indian health centers, and vaccination efforts have varied from tribe to tribe and state to state.

Still, the successes of some tribal health providers offer lessons for communities struggling to vaccinate their populations efficiently. Here are some of them.

They tailored their messaging to build trust

From the beginning, vaccine hesitancy was a public health challenge for tribal health providers, especially given the federal government's history of unethical research and medical abuses committed against Native people.

A recent survey of 1,435 American Indians and Alaska Natives from the Urban Indian Health Institute found that 75% of participants were willing to get a Covid-19 vaccine, largely out of a sense of responsibility to protect their communities and preserve their cultures. That suggests that culturally relevant messaging is key to building vaccine acceptance among Native people, the report's authors wrote.

It's a strategy that the Cherokee Nation says has worked for them.

The Cherokee Nation has administered more than 17,000 vaccines as of February 8, according to the tribe. About 141,000 Cherokee Nation citizens live within the bounds of the tribe's reservation in northeastern Oklahoma, suggesting an impressive pace so far.

The tribe's "biggest confidence builder" in the vaccine has been its decision to put fluent Cherokee speakers at the front of the line, said Principal Chief Chuck Hoskin Jr.

Cherokee speakers were among the first groups eligible for the vaccine, as part of the tribe's effort to save its language from the existential threat of Covid-19. Only about 2,000 people could speak Cherokee fluently before the pandemic. The virus claimed the lives of an estimated 45 speakers.

By inoculating its most revered and treasured citizens first, the Cherokee Nation signaled to others who may have been on the fence that it believed the vaccine was safe.

"That's done something to create a sense of optimism among our people and also to boost the confidence of other Cherokees who see these very revered Cherokee elders, in many cases who are fluent speakers, getting the vaccines and celebrating it," he told CNN.

Navajo Nation President Jonathan Nez said that people were hesitant to get the vaccine early on, so he got the shot on camera to help build confidence in it. The tribe has also been answering questions Navajo people have over the radio and in twice weekly town halls, sometimes bringing in experts like Dr. Anthony Fauci.

Also key to the tribe's confidence-building efforts are Navajo doctors and health care professionals, who are able to speak to citizens in their own language and alleviate any concerns about its safety.

"Utilizing our way of life and teaching helps our Navajo people feel it's okay to take the shots," Nez said.

About three out of four Navajo citizens are now interested in getting the vaccine, according to Nez. To accommodate that interest, the tribe has been holding mass vaccination events seven days a week.

As of February 8, nearly one in three people on the Navajo Nation have received at least one dose of the vaccine and 4.3% have been fully vaccinated -- a rate higher than most states. It's a story of resilience and perseverance, Nez said, especially given how hard Covid-19 hit the tribe.

They have the autonomy to decide who gets priority

Tribes are sovereign nations with the autonomy to determine how to provide for the health care needs of their communities. For those that operate their own health systems, that meant being able to decide who should get priority for the vaccine.

That autonomy allows tribes to adequately respond to the unique challenges they face, said Bohlen.

For example, the Centers for Disease Control and Prevention recommended that initial phases of the vaccine distribution include people 75 and older because they are at higher risk of severe illness and death for Covid-19. But certain tribes might decide to expand those parameters because of the health disparities their populations experience.

The Seattle Indian Health Board, a community health center that specializes in the care of American Indians and Alaska Natives, opened vaccinations to American Indians and Alaska Natives 55 and older early on in their distribution plan. That ensured that they could protect all of the elders served by their elders program, many of who are homeless, said CEO Esther Lucero.

"That's sometimes the only place they get a warm meal or get social interaction or not have to be out in really terrible weather," she said, referring to the location where elders in the program congregate. "So that was really important to us."

As of February 1, the organization has opened appointments to all people 50 and older, Native or not.

This health system is owned by its people

Having successfully inoculated some of their most vulnerable populations, some tribal health providers are now opening up appointments even to younger, relatively healthy Native people -- groups that would otherwise likely be months away from getting a vaccine.

Southcentral Foundation, a regional health organization owned and operated by the local Native community in southern central Alaska, offered its first vaccines to frontline healthcare workers and Native people 85 and older. Once the organization acquired the necessary staffing to operate larger vaccination clinics, it quickly scaled up its distribution to offer the shot to successively younger age groups, said interim president and CEO April Kyle.

It has been vaccinating Native people 16 and older since January 22.

Southcentral Foundation has administered more than 12,000 vaccine doses as of February 8, according to the health care system. The organization serves about 65,000 Alaska Native and American Indian people in Anchorage, the Matanuska-Susitna Borough and surrounding rural villages.

Kyle attributes the organization's smooth vaccine rollout so far to the Native people in southern central Alaska, who developed a community-focused health care system that in turn was able to plan for how to get vaccines even to people in challenging terrains.

"I'm watching the news, and I'm really impressed with the passion and sophistication of tribal health care and the ways that communities are able to know how in their community to get that vaccine out," she said.

They made big investments in health care

Cherokee Nation Principal Chief Hoskin has some advice for how the US can replicate the tribe's success. But it's not a quick fix.

Meanwhile, the Cherokee Nation has spent the past decade shoring up its health care system, which is now the largest tribally-operated health system in the US, Hoskin said.

That robust infrastructure allowed the tribe to set up a call center early on to reach eligible citizens efficiently -- a step that many states are only now taking. Contacting residents via robocalls also helped the tribal government avoid the long lines and confusing online signup forms that have plagued residents in so many counties and states.

"I hope the lesson people can learn from Cherokee Nation's success is that you've got to invest in health care during the good times, make it a priority for your nation and make it universally accessible for your citizens," Hoskin said.

The tribal health providers interviewed by CNN say they're getting shots out the door and into arms soon after they receive shipments, which come either from the Indian Health Service or their state governments.

But whether they can keep up their steady vaccination rates ultimately depends on whether the US can continue to provide vaccines at the speed and volume at which they need -- a challenge that has already slowed down efforts for counties and states.

There's reason for optimism: President Joe Biden's administration recently rolled out a series of measures aimed at ramping up vaccination efforts, which include purchasing 200 million more vaccine doses and increasing distribution to states by millions of doses.

If that turns out to be the case, tribal health providers say they'll be ready.

"Can the United States keep up with the Cherokee Nation?" Hoskin asked. "That's really the key question for us."

CORRECTION: This piece has been corrected to say that the virus claimed the lives of an estimated 45 Cherokee speakers.