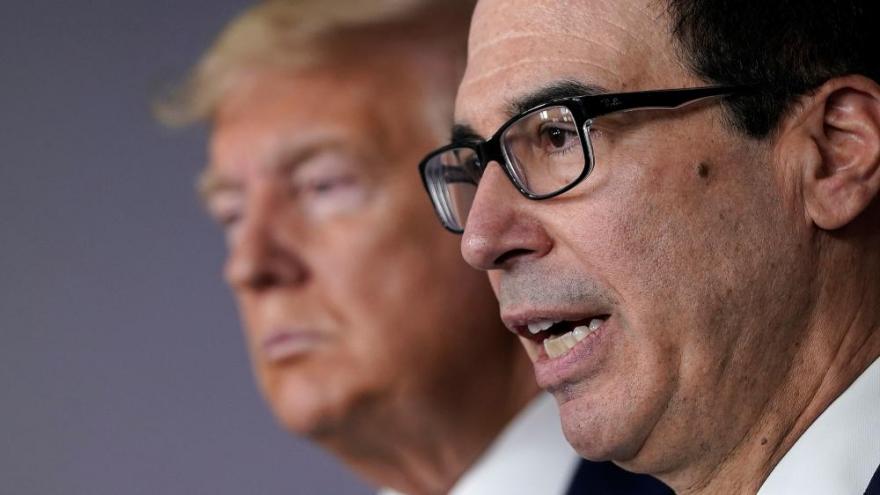 Treasury Secretary Steven Mnuchin said Americans could expect checks from the historic $2 trillion stimulus bill to be direct deposited in their accounts within three weeks.

(CNN) -- Treasury Secretary Steven Mnuchin said Sunday that Americans could expect checks from the historic $2 trillion stimulus bill to be direct deposited in their accounts within three weeks but experts have determined it could take longer to receive the money.

Congress and President Donald Trump enacted the stimulus bill last week to address the dramatic economic crisis caused by the coronavirus pandemic. Included are direct payments to many Americans, an unprecedented expansion in unemployment benefits and $350 billion in small business loans.

Mnuchin told CBS' "Face the Nation" that there will be a web-based application for those who don't receive direct deposit to give the IRS the necessary information.

It is not clear how long it would take the agency to send out all the money, but it would likely take weeks before the first payments start going out. Mnuchin said last week that the IRS would begin issuing payments within three weeks of the legislation being signed into law. The bill simply calls for payments to be made "as rapidly as possible."

But experts say it could take longer. In 2001, it took six weeks for the IRS to start sending out rebate checks under a new tax cut, and in 2008, it took three months after a stimulus package was signed into law.

However, many Americans could see their payments sooner than in the past. More people now file their tax returns electronically and provide the IRS with their bank information. These taxpayers will likely receive the money faster.

Mnuchin noted that his "number one objective is now delivering to the American workers and American companies the needed money that will put this economy in a position where it get through the next eight to 10 weeks."

On Sunday, Mnuchin also had a message for small businesses: "Go back and hire your workers because the government is paying you to do that."

Calculate how much you will receive from the stimulus bill

Under the stimulus, individuals will receive up to $1,200 and couples will receive up to $2,400 -- plus $500 per child. But the payments start phasing out for individuals with adjusted gross incomes of more than $75,000. The amount is then reduced by $5 for every additional $100 of adjusted gross income, and those making more than $99,000 will not receive anything. The income thresholds are doubled for couples.