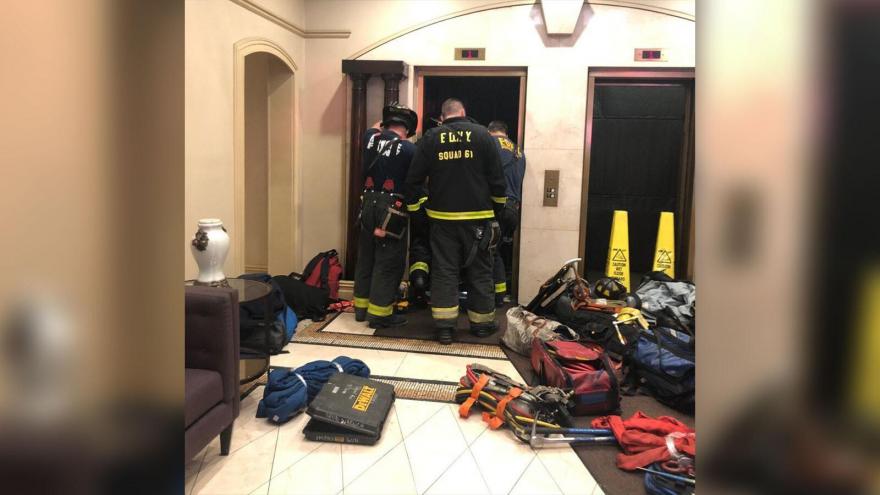 Treasury Secretary Steve Mnuchin acknowledged that his department withheld $3.92 million since 2004 from Fire Department of New York first responders suffering from illnesses related to the September 11, 2001.

(CNN) -- Treasury Secretary Steve Mnuchin acknowledged that his department withheld $3.92 million since 2004 from Fire Department of New York first responders suffering from illnesses related to the September 11, 2001, terrorist attacks because of other debts New York City owes the federal government, according to a letter addressed to New York City Mayor Bill de Blasio.

The letter states the city was provided with a detailed accounting of all debts since 2004, but the letter does not detail them.

"New York City firefighters are waiting on Secretary Mnuchin to act," a spokesperson for the mayor told CNN. "If the Trump administration supports first responders and the fearless men and women who keep Americans safe, then it's time for them to prove it."

The move comes after letters from New York Rep. Peter King last month showed that, by early September, the Treasury Department had withheld approximately $1.5 million from the health care program this year to that point.

The FDNY Uniformed Firefighters Association and several local and state officials have called on the Treasury to rectify the situation without costing the 9/11 first responders their health care funding.

"Can I blame Secretary Mnuchin? I guess I can't because this has been going on for 17 years, but I would appreciate him fixing it, and fixing it to our satisfaction where the money is returned," FDNY-Uniformed Firefighters Association President Andrew Ansbro said in a news conference Wednesday. "They can chase down New York City's debt somewhere else, but on the backs of New York City firefighters who are suffering from 9/11-related illnesses, that's not acceptable."

The letter, sent last Thursday, was also sent to 30 New York state officials including Democratic Gov. Andrew Cuomo and US Sen. Chuck Schumer, another Democrat who has been in correspondence with the Treasury fighting over the issue, according to his office.

The FDNY World Trade Center Health Program helps provide comprehensive physical and mental health services to all active and retired FDNY members who responded to the 9/11 attacks at no cost to the program members. The Centers for Medicare and Medicaid Services, a federal agency within the Department of Health and Human Services, is responsible for disbursing funding to the program.

Ansbro said that 9/11 first responders have continued to feel the funding shortages especially during the pandemic.

"The missing funding is directly hindering the program's ability to hire doctors, the number of fire department members who are been treated by the program continues to grow daily, and the members of the program that have been unable to go to appointments due to Covid pandemic are now seeking treatment, and more staffing is needed now," Ansbro said at the press conference.

In the letter, Mnuchin agreed that the city's firefighters shouldn't suffer the consequences of federal debt squabbles, but still said it's on the city to rectify the funding gap.

"HHS has concluded that it has no authority to refund offsets to past payments to FDNY to satisfy valid NYC debts," Mnuchin wrote. "We agree that it is unfair to burden FDNY with the delinquent debts of other NYC government entities. The City government should directly reimburse FDNY."

Mnuchin says that should the New York City government opt not to reimburse the nearly $4 million shortfall, his department could release funds to the FDNY program by offsetting the amount against future federal payments owed to the city.

"When it comes to ensuring 9/11 frontline responders can get the medical treatment and monitoring they need, any delay that impacts such care is simply intolerable," Neal, of Massachusetts and Pallone, of New Jersey, wrote.

The pair asked Mnuchin in their letter for clarification as to why the Treasury believes it lacks the authority to release the millions of dollars in reimbursements owed to the FDNY World Trade Center Health Program, and whether the Treasury specifically asked the Centers for Medicare & Medicaid Services to submit a request to exempt the money currently being offset from FDNY.

Neal and Pallone asked that the department respond accordingly by Tuesday of next week.