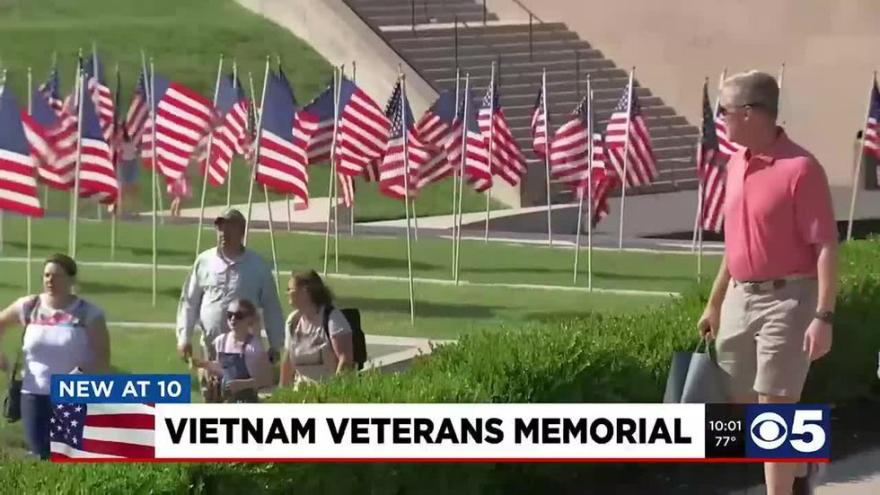 KANSAS CITY, Missouri (KCTV) -- While some people are celebrating Memorial Day weekend with cookouts, others are taking time to reflect on the holiday’s intended purpose: to honor service members who died in military service to the nation.

It is a fitting time for the traveling Vietnam Veterans Wall to come to Kansas City. It arrived on May 18th and will be on display through the end of Memorial Day.

“I was Navy construction battalion, and he was Army,” Caldwell told her.

On the virtual wall website, he was able to find a photo of his friend. Bryant was 20 years old when he died.

“It’s really emotional, because I was kind of tight with him. I was close with him, talked with him every day and everything, and to have him just, I’d say kind of disappear like that,” Caldwell reflected.

The Traveling Vietnam Wall is an 80 percent scale replica of the Vietnam Veterans Memorial in Washington, D.C. It is 400 feet long and has 140 panels with names of service members killed in the Vietnam War.

“It really brings it home. You hear numbers or read numbers in a book. That’s one thing but when you see the name of people that actually lived and had a family, that had a history, that had a future, but they you know, that was it for them,” said visitor Mike Railsback.

There are 29 casualty panels for those killed in Iraq and Afghanistan. There are a group of panels with the names of those killed on 9/11 and single panels for a number of other deaths from 1914-212, including those from the bombing of the USS Cole and the Benghazi attack.

Shane Virgil Stark was in Kansas City from New Mexico visiting family. He is a veteran who did not serve in wartime, but he knows not all casualties of war happen on the battlefield.

“I lost two friends here this last year. There were over in Afghanistan that they got sick from cancer and stuff from something that happened over there,” he remarked.

To that point, a display of American flags outside the National WWI Museum and Memorial represents the 140 veterans that take their own lives each week. The display is called Flags of Forgotten Soldiers. It is not part of the wall and has been up by Liberty Memorial every Memorial Day weekend in recent years.

Caldwell got help from the Veteran’s Administration nearly 20 years ago for PTSD and is still getting treatment.

“That causes my depression to go away and my self-esteem to be lifted,” he said.

He now works with the VFW and Disabled American Veterans. He notes that displays like the Traveling Tribute also help with self-esteem, particularly for Vietnam veterans who felt shamed and were ostracized when they returned home.

“It’s really a beautiful awakening for us because when we came back from Vietnam, we didn’t tell anybody,” Caldwell said.

“I’m just so glad we’re still recognizing this,” said Stark. “This is awesome.”

The tribute arrived in Kansas City on May 18th. It is free to visit and will remain up through Memorial Day with the exception of 7-11 tomorrow night, when it will be closed for the Kansas City Symphony’s Celebration at the Station.