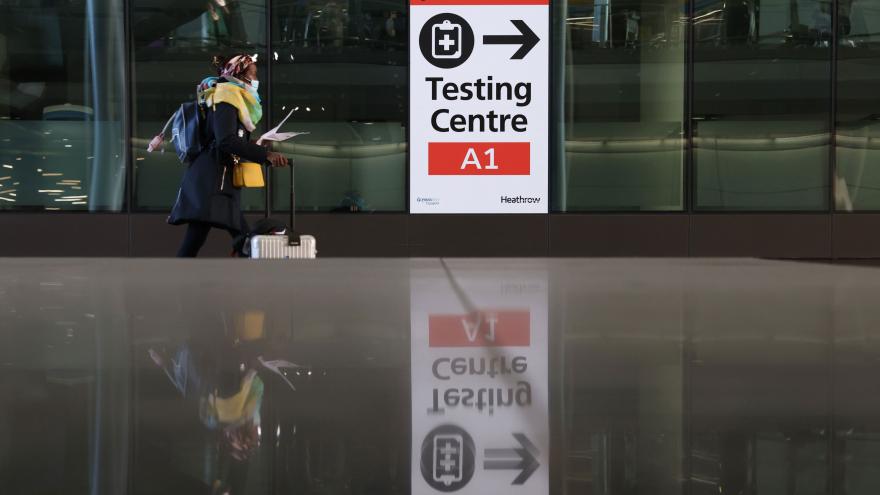 (CNN) -- Just as many countries around the world were beginning to loosen their border restrictions, reports of a newly detected coronavirus variant in South Africa sent many of those doors slamming shut again.

The new B.1.1.529 variant was named Omicron by the World Health Organization on November 26.

Different countries and territories have taken different approaches toward preventing the spread of this new variant.

The most up-to-date information is below, but please be aware that governments can change their regulations on a moment's notice. Check back for further updates.

Angola announced on Saturday that it will close its borders with seven countries in southern Africa in an effort to prevent the spread of the new Omicron variant, according to state media.

Angola's border will be closed to South Africa, Botswana, Lesotho, Eswatini, Malawi, Mozambique, Namibia, Tanzania and Zimbabwe will be closed until January 5, 2022.

Passengers entering Argentina who have been anywhere on the African continent within the last 14 days before their arrival to the country must undergo a mandatory 14-day quarantine upon landing.

They must also show proof of being fully vaccinated and a negative PCR test done within 72 hours before departure. Upon arrival in Argentina, they must take an antigen test. Travelers who are not citizens or residents of Argentina will be required to prove they have health insurance that will cover Covid-19.

Australian officials have suspended all inbound and outbound flights to Botswana, Eswatini, Lesotho, Malawi, Mozambique, Namibia, Seychelles, South Africa and Zimbabwe for at least 14 days and has banned foreigners with a travel history to these locations within the previous two weeks from entering.

Quarantine rules are still in places for the few people allowed to enter the country. Australian citizens and fully vaccinated visa holders may enter, but foreigners must quarantine in a hotel for up to 14 days. Some locals are allowed to quarantine at home, but each state has its own guidelines.

Meanwhile, the state of Tasmania is barring people who have been in any overseas location -- except for New Zealand's South Island -- from entering.

The measure, announced Friday, came despite President Jair Bolsonaro previously stating he would not support such border closures.

Health Minister Jean-Yves Duclos has announced that any non-Canadian who has been in South Africa, Mozambique, Namibia, Zimbabwe, Botswana, Lesotho and/or Eswatini from November 12 onward will be barred from entering the country. Canadian citizens or permanent residents who have been to one of those countries will still be allowed to come home, but with strict rules: they must have a negative PCR test to board their flight to Canada, must take another virus test upon arrival, quarantine at a hotel until they have a confirmed negative test result, and then quarantine at their residence for another 14 days.

Chile has banned the entry of anyone who has spent time in the past 14 days in Botswana, Eswatini, Lesotho, Mozambique, Namibia, South Africa and Zimbabwe. Chile residents who have been any of the affected territories must submit to testing on arrival and quarantine for seven days.

One country not making major changes amid the Omicron news is China, likely due to the fact that its travel restrictions are already extremely tight with few if any foreigners able to enter the country. Zhong Nanshan, a top respiratory disease expert and government adviser, said China has no plans to take any "major action" in response to the Omicron variant.

Hong Kong, meanwhile, strengthened its already tight restrictions, banning any foreigners who have visited South Africa, Botswana, Eswatini, Lesotho, Malawi, Mozambique, Namibia and Zimbabwe in the past 21 days. Any Hong Kong residents arriving from the southern African countries will have to spend seven days in a government quarantine facility where they will undergo daily virus testing and be monitored by health professionals. After the seven days, they'll be required to continue quarantine for 14 days at a designated hotel.

Denmark has advised its citizens against all travel to Angola, Malawi, South Africa, Lesotho, Eswatini, Mozambique, Zimbabwe, Botswana and Namibia, and introduced a mandatory 10-quarantine and testing regime for anyone who has visited them in the past 10 days.

All travelers who have stayed in any of the seven nations within 10 days before entry to Denmark must be tested and go into isolation for 10 days after entry, according to the Danish Foreign Affairs Ministry. Isolation can be broken on the 6th day after two negative PCR tests (on day 4 and 6).

Foreigners without a permanent residence in Denmark must have a worthy purpose to travel to Denmark and can only enter if they can present a negative PCR-test taken a maximum of 72 hours before the time of entry, according to the Foreign Ministry.

Fiji is tightening its border regulations. The southern African countries were already on its "red list," but now only Fijian citizens can enter the country if they have been to one of the red-listed nations. In addition, they will now have to quarantine for 14 days upon arrival, with PCR tests carried out on days 5 and 12.

Riaz Hassan, a spokesperson for Fiji's Ministry of Health and Medical Services, told CNN the new restrictions will not affect the country's plans to reopen to tourists December 1.

Travelers will have to have a special permit from the local Greek embassies and diplomatic missions to travel, the ministry said, adding that on arrival they will be tested and put in quarantine hotels for 10 days after which they'll be tested again.

Beginning December 1, all international passengers must submit a self-declaration form to an online government portal that includes a 14-day travel history and a negative PCR test taken within 72 hours prior to their departure, according to guidelines issued by India's Health Ministry.

Travelers from countries deemed "at risk" will also now face further testing and surveillance, including a PCR test on arrival. They will also have to quarantine at home for seven days.

Indonesia says it is banning the arrival of any foreigners who have spent time in the last 14 days in South Africa, Botswana, Namibia, Zimbabwe, Lesotho, Mozambique, Eswatini and Nigeria. Any Indonesian nationals who have traveled to those countries will be required to quarantine for 14 days on arrival.

Ireland says it is imposing mandatory quarantine for anyone arriving from Botswana, Eswatini, Lesotho, Mozambique, Namibia, South Africa and Zimbabwe. Irish residents arriving from affected countries will be allowed to isolate at home.

Israel has the distinction of being the first country to close its borders following news of the Omicron variant less than three months after the Middle Eastern country began allowing tourists back in. Israeli citizens can come back to the country but will have to quarantine, even if fully vaccinated.

Italy has restricted the arrival of anyone who has been in South Africa, Lesotho, Botswana, Zimbabwe, Mozambique, Namibia, Eswatini during the last 14 days.

As of November 30, Japan's borders are closed to any non-citizens, including international students, short-term residents (those already in the country can stay), or people visiting family.

Kuwait on Saturday halted direct commercial flights from South Africa, Namibia, Botswana, Zimbabwe, Mozambique, Lesotho, Eswatini, Zambia and Malawi, and advised against all travel, particularly to southern Africa. Kuwaiti nationals arriving from affected countries must spend seven days in quarantine, while non-Kuwaitis would not be permitted to enter within 14 days of visiting the listed countries.

Tourists who have traveled to or transited for more than 12 hours through South Africa, Namibia, Mozambique, Lesotho, Botswana, Zimbabwe, and Eswatini within the past 14 days will be denied entry into the country as of Sunday, the Health Ministry said.

Nationals of the Maldives and long-term visa holders arriving from these countries will still be allowed to enter, but will have to undergo a mandatory 14-day quarantine with virus testing.

Malta has banned travel to and from South Africa, Nambia, Lesotho, Botswana, Eswatini and Zimbabwe.

The Kingdom of Morocco has suspended all incoming international flights for a two-week period beginning midnight November 29.

The Netherlands has imposed a flight ban on the southern African region following reports of the new variant. Anyone entering the Netherlands who has been to one of those countries is required to quarantine at a government-selected hotel. Two people have already been arrested for violating this policy.

Travelers from these countries are required to stay in managed isolation quarantine for 14 days and undergo testing, New Zealand's Covid-19 Response Minister Chris Hipkins said in a statement.

Anyone who has visited the seven countries within the past 14 days will also be banned from entry.

Pakistan announced on Saturday that it would be closing its borders to arrivals from South Africa, Hong Kong, Mozambique, Namibia, Lesotho and Botswana. Pakistani citizens returning from affected countries will be permitted entry if they're vaccinated and produce negative results taken from before and after travel.

Beginning November 28, non-Russians who have traveled in Botswana, Eswatini, Lesotho, Madagascar, Mozambique, Namibia, South Africa, Tanzania and Zimbabwe are not allowed to enter the country. Russian nationals who have been to one of those countries -- or in Hong Kong, mainland China, Israel or the United Kingdom -- are permitted to enter but are required to take a PCR test upon arrival and self-isolate until they have a confirmed negative result.

Rwanda on Sunday announced a temporary suspension of direct flights to and from southern Africa. Anyone arriving from affected countries will be required to quarantine for seven days.

Saudi Arabia has suspended air connections with South Africa, Namibia, Botswana, Zimbabwe, Mozambique, Lesotho and Eswatini. Anyone who has spent any of the past 14 days in affected countries will be barred from entry. Saudi citizens who have visited the region must quarantine for five days on arrival.

Anyone who is not a Singaporean passport or residency holder who has visited at least one of those countries will not be permitted to enter Singapore or transit through the airport there. Singaporean citizens and residents who have visited one of the countries can still return home but are subject to a 10-day quarantine.

Passengers arriving to Spain from Botswana, Eswatini, Lesotho, Mozambique, Namibia, South Africa and Zimbabwe will have to quarantine for 10 days, with the possibility to leave isolation after a virus test on day seven. The new rules will be in place for 14 days, and could be extended further.

Passengers who are residents in the EU, Schengen space, Andorra, Monaco, Vaticano and el Marino, and who are transiting through to Spain to reach these countries, are exempt from the new rules, as well as airline crew members.

Sri Lanka has banned the arrival of any foreigners who has been in South Africa, Botswana, Lesotho, Namibia, Zimbabwe and Eswatini in the past 14 days. Sri Lankan citizens arriving from the listed countries must spend 14 days in quarantine at home.

Thai authorities have confirmed that they will ban travel from Botswana, Eswatini, Lesotho, Malawi, Mozambique, Namibia, South Africa and Zimbabwe starting from December.

Turkey on Friday issued a ban on arrivals from Botswana, South Africa, Mozambique, Namibia and Zimbabwe.

Outbound passenger flights from Dubai to the countries listed however are permitted, the statement said.

UK Health Secretary Sajid Javid said from Friday six countries would be added to the "red" list: South Africa, Botswana, Lesotho, Eswatini, Zimbabwe and Namibia. UK or Irish citizens or permanent residents returning from a red-listed country must quarantine in a hotel for 10 days, regardless of vaccination status. Citizens of other countries who have visited a red-list destination will not be able to enter at all.

Further restrictions on all arrivals were announced over the weekend. Anyone entering the UK must now quarantine until they receive the results of a PCR test taken on their second day in the country. Anyone testing positive faces a 10-day quarantine.