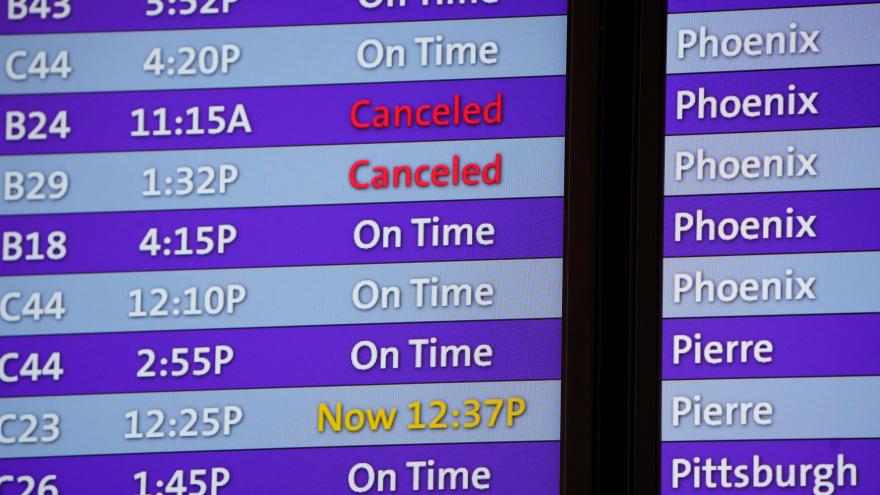 (CNN) -- Thousands of flights have been canceled over the past several days as Covid cases surge across the globe.

Monday was an even bigger nightmare for travelers, with more than 2,800 flights canceled, and 11,000 delayed.

Globally, airlines canceled more than 6,000 flights on Christmas Eve, Christmas and the day after Christmas. In the United States, more than 1,200 flights were canceled and more than 5,000 were delayed on Sunday alone as staff and crew call out sick.

The cancellations come at the busiest time of year for air travel. The US Transportation Security Administration said it screened millions of people each day over the holiday weekend, peaking at 2.19 million travelers on Thursday, December 23. On Wednesday, more people passed through TSA checkpoints than on the same day in 2019.

Saturday, air travel was a bit slower because of the flight cancellations: More than 1.53 million people passed through security checkpoints Saturday.

United Airlines said last week it had to cancel hundreds of flights because it lacked enough crew members to safely fly all of its scheduled routes.

"The nationwide spike in Omicron cases this week has had a direct impact on our flight crews and the people who run our operation," said a United memo obtained by CNN.

Delta said it was working to get all stranded travelers home as quickly as possible.

"We apologize to our customers for the delay in their holiday travel plans," Delta said in a statement. "Delta people are working hard to get them to where they need to be as quickly and as safely as possible on the next available flight."

European airlines are also experiencing a small number of cancellations amid record-breaking numbers of Covid-19 cases in several European nations.

German airline Lufthansa said it will cancel 10% of its winter flight schedule as the pandemic continues to hit the aviation industry.

In an interview with Frankfurter Allgemeine Sonntagszeitung last week, Lufthansa CEO Carsten Spohr said that due to "a sharp drop in bookings" the airline will have to cancel 33,000 flights from mid-January to February 2022 or 10% of the group's winter flight schedule.

Spohr's comments were confirmed to CNN by the Lufthansa press office.