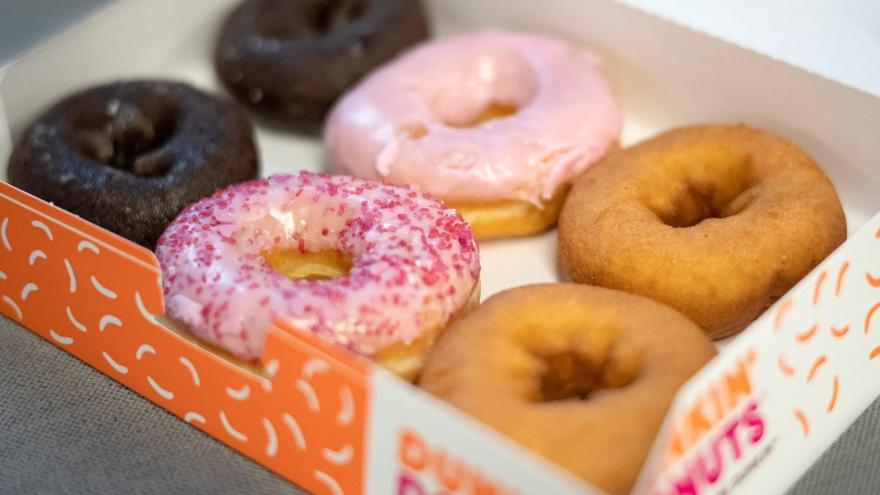 A transgender woman is suing Dunkin' Donuts and one of its Pennsylvania franchisees after, the woman alleges, managers at a Bethlehem store allowed customers to harass and attack her, then fired her when she complained.

(CNN) -- A transgender woman is suing Dunkin' Donuts and one of its Pennsylvania franchisees after, the woman alleges, managers at a Bethlehem store allowed customers to harass and attack her, then fired her when she complained and left work to protect herself.

The federal civil rights lawsuit, filed Friday in Pennsylvania's eastern district, requests a jury trial and unspecified damages of more than $150,000. It outlines claims of harassment, a hostile work environment, wrongful termination, retaliatory discharge and a failure to accommodate her HIV status, among its 18 counts.

Referred to as Jane Doe in the lawsuit, the plaintiff is described as an HIV-positive woman of color.

Doe worked at the Dunkin' Donuts in the spring of 2018. Before she was fired, she alleges in the lawsuit, she endured epithets such as "tranny," "n***a" and "f*ggot," while her requests that customers, superiors and coworkers use her preferred name and pronouns were ignored. A shift leader also instructed her to stop using the women's bathroom, the lawsuit says.

The alleged harassment reached its peak when three customers, including a former coworker, berated her with slurs and threatened to kill her, the lawsuit says. The former colleague also shoved her, it says.

Doe called her manager, who told her to go home if she didn't feel safe, which she did, according to the lawsuit. Days later, it says, she was fired.

The company that owns the franchise, Triangle Doughnuts LLC, said she was fired for violating the company's time-off policy, the lawsuit says.

Two numbers linked to Triangle Doughnuts were both disconnected Tuesday. Another number for Triangle's owner, listed in a Dunkin' Donuts franchise disclosure document, was also disconnected.

"We and our franchisees pride ourselves in our diverse workforces, and we strive to create inclusive work cultures. Our franchisees are required by their franchise agreement to comply with all applicable laws," a corporate statement said.

Shortly after Doe took a cashier position at Bethlehem's Dunkin' Donuts on Fourth Street in or around March 2018, a shift leader called her by her birth name and used male pronouns to describe her, even after Doe asked her to stop, the lawsuit says. The shift leader also referred to Doe as "dude," it says.

The assistant manager and manager also misgendered her, despite her repeated requests to stop, Doe alleges.

Customers did the same, and when Doe corrected them, one customer complained to management that patrons shouldn't have to use Doe's preferred pronouns because Doe was "not a girl," which managers did not contest, the lawsuit says.

In another incident, patrons also said they didn't want "him" serving them, according to the lawsuit. Rather than defend their employee, the shift leader and assistant manager moved her to the back of the shop, out of view of the customers, the lawsuit says.

After the shift leader told Doe to stop using the women's bathroom -- saying, "They don't feel comfortable with you going in there" -- the harassment intensified, the lawsuit alleges.

A coworker "tried to get in Doe's face aggressively," called her "ni**a" and threatened to beat her up, according to the lawsuit. Customers, including a former coworker, subjected Doe to homophobic slurs and said, "I'll kill your b*tch a**," it says.

After the former coworker pushed her, Doe reported the incident to police and called her manager, who told her, "If you don't feel safe, go home," the lawsuit says. Doe did just that, it says.

Capt. Benjamin Hackett of the Bethlehem Police Department told CNN he could not find an incident report from April or May 2018 matching Doe's complaint, but he noted that this particular Dunkin' Donuts is situated in a bar district and is the subject of numerous calls to police. Without Doe's actual name, it would be difficult to find a report, he said.

In the days after Doe called police and left work, the lawsuit says, the manager informed Doe she no longer worked at Dunkin'.

After Doe filed a complaint with the Equal Employment Opportunity Commission, the manager told the commission that employees shouldn't correct customers because the customer is always right, the lawsuit says.

"I did not and will not correct my customers," the manager told the commission, according to the lawsuit.

Triangle Doughnuts told the commission that Doe was fired for violating the company policy that employees must request time off two weeks in advance, the lawsuit says.

Doe does not believe this is the actual cause for her firing, according to the lawsuit. Rather, she feels her discharge was motivated by her sex, her gender identity and/or gender stereotyping, and her attempts to rebuff customers and fellow employees, the lawsuit says.

Triangle Doughnuts' time-off policy is problematic, however, according to the lawsuit, because HIV-positive people may face complications they can't foresee two weeks in advance. Triangle also has no anti-retaliation policy, the lawsuit says.

The EEOC sent Doe a notice of her right to sue her former employer last month, saying it was "terminating the processing of this charge."

Asked to elaborate, spokesman James Ryan said EEOC complaints are confidential and the commission is prohibited from commenting on them. He did not provide an answer to a followup email requesting information on how the commission decides to terminate a charge and what a termination entails.