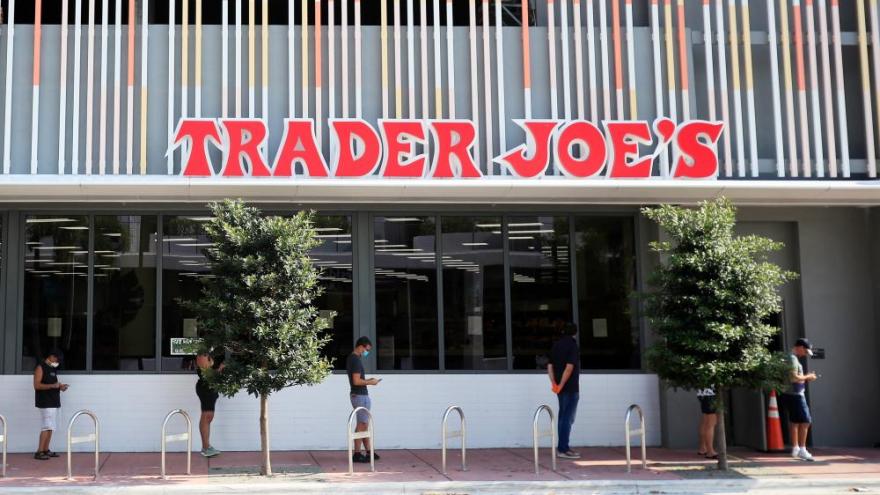 Trader Joe's said its customers are not bothered by the labels.

(CNN) -- Amidst a reexamination of American culture that has seen numerous racial and ethnic stereotypes dismantled -- like the infamous Aunt Jemima -- Trader Joe's persists.

More than 5,000 people have signed a petition calling on the grocery store chain to change what they call its racist branding names, using phrases like "Trader José" "Trader Ming's" and "San Joe" on some of its international food products.

But Trader Joe's is defending the practice.

"We want to be clear: we disagree that any of these labels are racist. We do not make decisions based on petitions," the grocery store said in a statement on July 24.

"Decades ago, our Buying Team started using product names, like Trader Giotto's, Trader José's, Trader Ming's, etc. We thought then — and still do — that this naming of products could be fun and show appreciation for other cultures," it continued.

The statement is a far cry from the one made just last week by Kenya Friend-Daniel, a spokeswoman for Trader Joe's, when the petition was first gaining traction.

At that time, Friend-Daniel insinuated the names were already in the process of being changed, a process that would continue.

"While this approach to product naming may have been rooted in a lighthearted attempt at inclusiveness, we recognize that it may now have the opposite effect -- one that is contrary to the welcoming, rewarding customer experience we strive to create every day," she said in a statement to CNN.

"Packaging for a number of the products has already been changed, but there's a small number of products in which the packaging is still going through the process," Friend-Daniel added.

That doesn't seem to be the case now. And the move has particularly been praised by pundits on the right.

"Pitch perfect response from Trader Joes to one of the dumbest twitter mob non-controveries ever. Glad they won't be bending the knee to the mob over....gucamole," Meghan McCain wrote on Twitter on Thursday.

Stuart Varney, a Fox News commentator, called the move by Trader Joe's a "win for sanity."

The problem, according to the petition and those on its side, is that this kind of packaging exoticizes other cultures -- presenting "Joe" as the norm and Ming, San Joe, José, and so on, as falling outside of that realm.

In its most recent statement, Trader Joe's asserts that customer feedback revealed its clientele is unbothered by this "fun" approach to product marketing.

"Recently we have heard from many customers reaffirming that these name variations are largely viewed in exactly the way they were intended — as an attempt to have fun with our product marketing," the statement said. "We continue our ongoing evaluation, and those products that resonate with our customers and sell well will remain on our shelves."