Tourist thrown out of Venice for sunbathing topless on war memorial 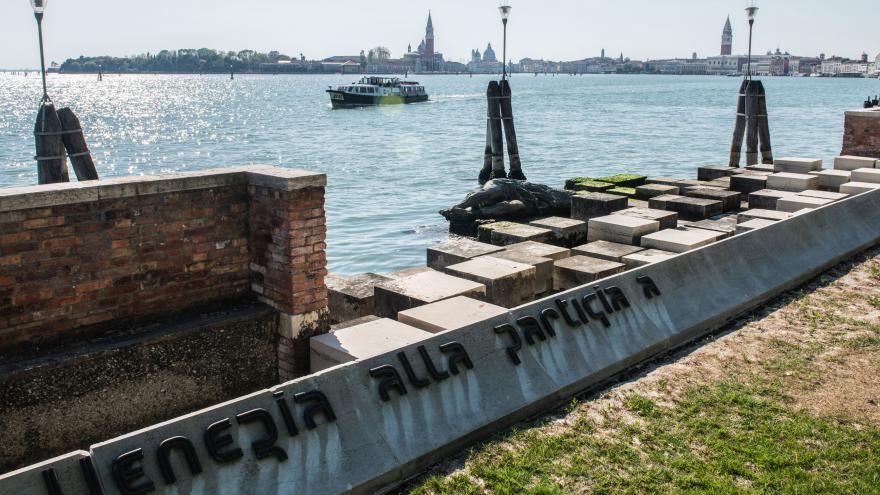 (CNN) -- A female tourist was thrown out of Venice after she was caught posing for photos topless on a war memorial.

The 30-year-old from the Czech Republic stripped off last Friday afternoon, dumping her belongings on the monument -- which pays homage to Italy's war heroes -- as she went for a swim in the freezing lagoon, and then lay beside the statue of a murdered female partisan to pose for photos.

Local Mario Nason was out walking with his son when he saw the woman and her two companions on the monument, which sits on the waterfront.

Dedicated to the women who gave their lives in their fight for freedom under fascism, it consists of a bronze statue of a murdered partisan, half in the water, half on a platform of bronze and concrete. Placed near the gardens of the Biennale, it is one of relatively few statues dedicated to women in Italy.

"It was a beautiful day and we saw two people taking photos. I saw a strange movement and then I saw this woman swimming without a care in the world," Nason told CNN.

"I thought she must be crazy, thinking she could swim on a freezing day.

"But then I saw she was trying to get out of the water by climbing onto the statue, wearing just her bikini bottoms.

"She got up on it, then she got back into the water, totally relaxed.

"Her boyfriend and another woman had jumped over the barrier and were on the monument, to take better photos of her. They were stood there beside her clothes that she'd left [on the monument], just as you do on the beach."

"It was incredible because [the tourists] were asking, 'How is this a problem?' They didn't have the slightest inkling of what they were doing," said Nason.

"It's like going to Rome, leaping in the Trevi Fountain and then saying, 'What do you mean, you can't do this?'

"You can say, whatever, they haven't killed anyone. But when I travel, if I see a fountain, I don't have the urge to jump in. If I'm in Paris, walking along the Seine, I don't throw myself into the river. If I went to Prague, threw my clothes on a monument and went for a swim, would nothing happen? It's common sense. Why do people do these things in Venice that they wouldn't do elsewhere?"

A spokesperson for the local police told CNN that according to their report, the woman was lying on the monument, imitating the dead partisan for a photo.

"She wanted the statue in the shot," they said. "I imagine she apologized."

Tourists behaving badly in Venice is nothing new. Only a week earlier, a man stripped off and took a dive into the Grand Canal -- he was never caught.

Others have been fined and forced out of the city for breaching decorum regulations. Last summer, a Scottish tourist was kicked out for diving off the Accademia Bridge into the Grand Canal after a boozy night out. And in 2019, a German couple was ejected for making coffee on a camping stove under the Rialto Bridge.

"Sitting in St. Mark's Square with a slice of pizza, or brewing coffee, is a marvelous thing to put on Facebook, but if 30 million tourists behave like that, Venice becomes a beach or a campsite," said Nason.

"This goes beyond the personal upset of the sensitivity around the partisan monument. They probably didn't know the statue of the woman lying there was a dead partisan. But it's treating Venice like a beach.

"Just because you have the urge to do something, doesn't mean you should do it."