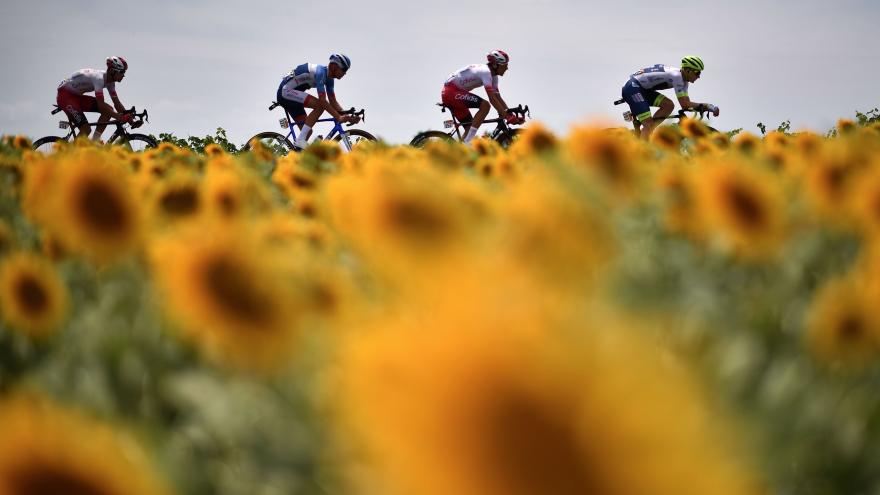 (CNN) -- The Tour de France has been pushed back until August, according to cycling's governing body, after the French government extended its ban on mass public gatherings amid the coronavirus pandemic.

The world's most prestigious bike race takes place annually in France. One of the most supreme tests of sporting endurance, the event is also embedded in French culture and society, with millions of fans lining the roads to watch the Tour.

The race had been due to be held from June 27 to July 19, but after French President Emmanuel Macron announced Monday that certain restrictions in the country would remain in place until mid-July that plan was scuppered

The Tour will now be staged between August 29 and September 20.

"Holding this event in the best conditions possible is judged essential given its central place in cycling's economy and its exposure, in particular for the teams that benefit on this occasion from unparalleled visibility," read a statement on the UCI's website Wednesday.

Four-time Tour de France winner Chris Froome welcomed the announcement after a period of uncertainty for teams and riders.

"The news many of us have been waiting for. Some light at the end of the tunnel," he wrote on Twitter.

This year's race will start in Nice, before crisscrossing France and concluding on Paris' Champs Elysees as had been originally envisaged.

France is currently in lockdown and has had at least 130,253 confirmed cases of Covid-19 and 15,729 deaths, according to the latest figures.

Non-essential public places have been closed across the country since March 14 as the government seeks to stem the spread of the virus.

"We would like to thank all of cycling's stakeholders, the Tour de France's partners, its broadcasters as well as all of the local authorities for their reactivity and their support. We all hope that the 2020 Tour de France will help to turn the page on the difficult period that we are currently experiencing," read a statement on the Tour de France official website.

The new dates mean the Tour's final stage will take place on the same day as the delayed French Open tennis tournament begins in Paris.

Earlier this month, the UCI furloughed members of staff and its leaders opted to cut their salaries as the sport attempts to cope with a number of postponements, notably the Tokyo Olympics.

This year's Giro d'Italia had already been postponed after the Hungarian government announced it would not be able to host the opening stages in early May.

The UCI's latest announcement confirmed the Giro will now be held after the organization's Road World Championships, which finish September 27.

The Vuelta a España will also be held at some point after the UCI Worlds as part of cycling's revised calendar.