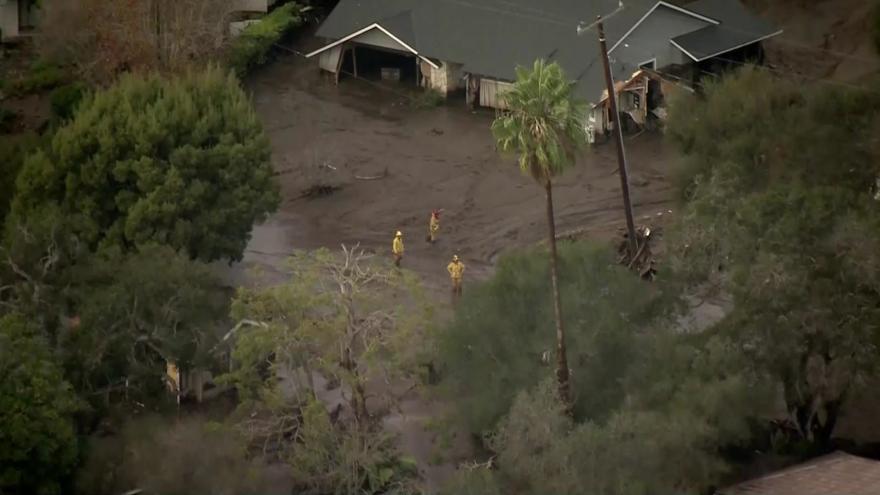 MONTECITO, Calif. (AP) — The oldest victim swept away in a California mudslide was Jim Mitchell, who had celebrated his 89th birthday the day before. He died with his wife of more than 50 years, Alice.

The youngest, 3-year-old Kailly Benitez, was one of four children killed.

As their names and those of 14 other victims were released Thursday, crews kept digging through the muck and rubble looking for more people.

"At this moment, we are still looking for live victims," Santa Barbara fire Capt. Gary Pitney said. But he confessed: "The likelihood is increasing that we'll be finding bodies, not survivors. You have to start accepting the reality of that."

The Mitchells were in love with their home in the seaside enclave of Montecito where they moved in 1995, according to their daughter. They also loved their dog, Gigi, who is missing.

The other children killed were 6-year-old Peerawat Sutthithepn, 10-year-old Jonathan Benitez and 12-year-old Sawyer Corey. None of the adult dead shared their last names.

All of the dead were killed by "multiple traumatic injuries due to flash flood with mudslides," authorities said.

Forty-three people were missing, but many or most of them may simply have been unreachable to the family and friends who reported they couldn't find them, Santa Barbara County Sheriff Bill Brown said.

Some smaller number, which authorities wouldn't give, were actively being investigated as missing people who could be dead under the debris.

Pitney said many rescues were still happening Wednesday and Thursday, but most if not all were of people who were safe but just wanted to get out of the area.

Among the searchers were more than a dozen firefighters who climbed through rubble in the backyard of a mansion that had been torn apart. Some rescuers used poles to probe the muck for bodies, while others waded chest-deep in the mire. Two black Labrador retrievers swam around a debris-filled swimming pool, trying to pick up any scent.

Crews marked places where bodies were found, often far away from a home, and used that information to guess where other victims might have ended up as the surging mud carried or buried them.

The mudslide, touched off by heavy rain, took many homeowners by surprise early Tuesday, despite warnings issued days in advance that mudslides were possible because recent wildfires had stripped hillsides of vegetation that normally holds soil in place.

The disaster was already unfolding when Santa Barbara County officials sent out their first cellphone alert at 3:50 a.m. County emergency manager Jeff Gater said officials decided not to send one sooner out of concern it might not be taken seriously.

As the rainwater made its way downhill with gathering force, it pried boulders from the ground and picked up trees and other debris that flattened homes, cars and carried at least one body a mile away.

From an aerial view, the community that is home for celebrities such as Oprah Winfrey and Jeff Bridges looked like two vastly different places.

Trashed areas were awash in a sea of mud, with only the tallest trees standing and some homes buried up to their roofs. Next to some of the devastated areas sat large estates untouched by the torrent, their lawns still green and the landscaping lush.

Searchers had checked most of the debris zone for victims and some were doubling back to leave no stone unturned Thursday when a crew ended up in the backyard of Bill Asher, who lost his palatial home and a similar one he was restoring next door.

Asher returned with a pickax and five friends and trudged through the debris to salvage any possession he could find.

He was still shaken by his harrowing experience Tuesday with his pregnant wife and two young children as the violent gusher arrived with a deafening rumble.

"I looked out my front window and saw my car fly by," he said. "I screamed at my family and water started coming into the house. Windows went flying, doors went flying."

The family rode out the storm unharmed on kitchen counters as the debris smashed through the walls and water swirled around them.

Asher's return to the scene, where murky water was knee-deep, turned up at least one gem: his wife's engagement ring, the only keepsake she wanted him to find.