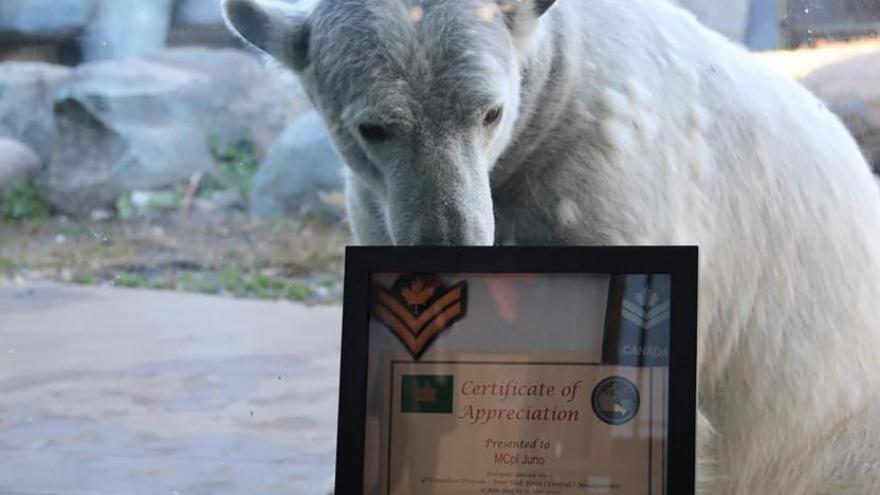 (CNN) -- The Canadian Army is celebrating the promotion of one of its furriest members.

Juno the polar bear, who lives at the Toronto Zoo, was adopted by the army shortly after she was born on Remembrance Day 2015. Polar bears are the army's official mascot, and given her birthdate, she was named for the Canadian landings on Juno Beach in World War II.

The army gave Juno the honorary ranking of private, and later corporal, the zoo said.

Now, five years after she was born, Juno is still moving up the ranks.

"Juno has reached a new milestone and was promoted by the Canadian Army from Honorary Corporal to the esteemed ranking of Honorary Master Corporal," the zoo said on Facebook this month.

Juno and her brothers, Hudson and Humphrey, act as "Arctic ambassadors" for polar bears around the world, helping to spread awareness about climate change and the impact it has on the vulnerable species.

"We are truly honoured that the Canadian Army has promoted Juno to Master Corporal as she continues to be an outstanding ambassador for her counterparts in wild," Toronto Zoo CEO Dolf DeJong said in a news release. "Juno and the other polar bears that call the Toronto Zoo home, play an integral role in educating our guests about the direct impact of climate change and the loss of sea ice that directly impacts polar bears in the wild."