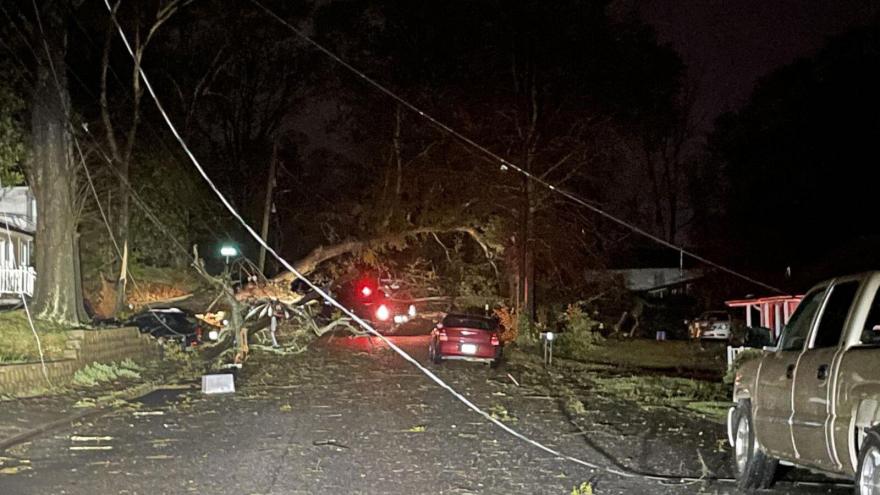 A wave of tornadoes rolled across five southern states on Thursday, leaving at least five people dead and inflicting heavy damage in its wake, according to officials.

(CNN) -- Strong storms and tornadoes whipped across parts of the South on Thursday evening and Friday morning, killing at least five people in Alabama and one in Georgia, and leaving some communities in ruins.

In Alabama and Georgia especially, tornadoes are believed to have caused devastating scenes evident Friday: homes and businesses ripped apart, and streets and yards littered with mangled debris.

One of the last tornadoes struck the western Georgia city of Newnan early Friday, the weather service said, tearing roofs and mangling trees and utility poles just after midnight.

Firefighters were going door to door in the city of about 40,000 people southwest of Atlanta on Friday morning, and helped several people from their homes after trees fell on the structures, a CNN crew there reported.

The storms killed at least one person in Newnan's Coweta County, Fire Chief Deron Patrick Wilson said. Branches, metal and other items were strewn across Newnan's roads and fields.

"This stuff is unbelievable. I kind of think about this kind of stuff when you look out in the Midwest, Oklahoma. I think you're going to see that same kind of damage here," Wilson said.

Sirens in Newnan gave people about 15 to 20 minutes of warning before the tornado hit, residents told CNN.

On Thursday evening, at least five deaths and multiple injuries were reported in Calhoun County, Alabama, after a tornado passed through, Sheriff Matthew Wade told CNN.

"We're also very grateful that of all the damage done, nobody was hurt," Pelham City Manager Gretchen DiFante said. "We're very thankful for that this evening."

About 38,000 homes and businesses were without power in Alabama and Georgia on Friday morning, according to utility tracker PowerOutage.us.

To the north, thousands more customers were without electricity -- including more than 135,000 homes and businesses in Ohio -- after strong winds from the same system hit several states.

At least 5 dead in Alabama

That includes four adults -- three from the same family, and a man elsewhere in a mobile home -- in the town of Ohatchee, Calhoun County Coroner Pat Brown said. A tornado is believed to have hit the town, leaving "substantial damage to properties and homes," the weather service said.

The fifth person to die was a woman in Wellington, about 10 miles east of Ohatchee, the coroner said.

In the Alabama city of Pelham, in Shelby County just south of Birmingham, Cesar Villaseñor, 22, was in a van with his boss when they were caught in severe weather.

They were trying to get to shelter at his boss's house, Villaseñor said, around the time a tornado or tornadoes were reported in the area.

"We were literally half a mile from his house and everything was all clear. Out of nowhere, it starts raining and I started recording -- everything starts going to hell basically." In a video Villaseñor shared, debris is seen flying through the air, uprooted trees lie on the ground and houses are damaged.

"I was like, this is probably it. I'm probably dead," he said. "At one point, the van was shaking really bad to the point that I thought it was like to flip over. I was just shaking. I couldn't control my hands."

Alex McNair, owner of Corefit Strong in Pelham, told CNN his gym was practically destroyed by a tornado.

"The roof was lifted off, bricks were thrown through the windows of our garage doors, debris tossed inside the gym, our HVAC unit was ripped off our roof, glass thrown throughout the gym, our flooring is destroyed, along with other roof and structural damage to other parts of the building," McNair wrote to CNN.

No one was hurt there, he said.

Elsewhere in Shelby County, near Columbiana, at least one home and other structures were ripped from their foundations Thursday -- hit by what's believed to have been a tornado -- and deposited dozens of feet from where they'd been, a CNN crew that visited the scenes reported.

Two people were taken to a hospital with injuries, officials said.

Residents were rummaging through the ruins with flashlights in the dark overnight, hoping to salvage some of their possessions. Broken furniture and a red tractor lay piled in a heap.

In the same area, fences at an animal rescue center were blown away, leaving many animals wandering. The center cared for more than 50 horses and several dozen goats and sheep. People were trying to corral the animals overnight.

Correction: An earlier version of this story incorrectly stated the number of states where tornadoes were reported Thursday into Friday. It was three.