Tornado warnings were delayed to the public during deadly weekend outbreak 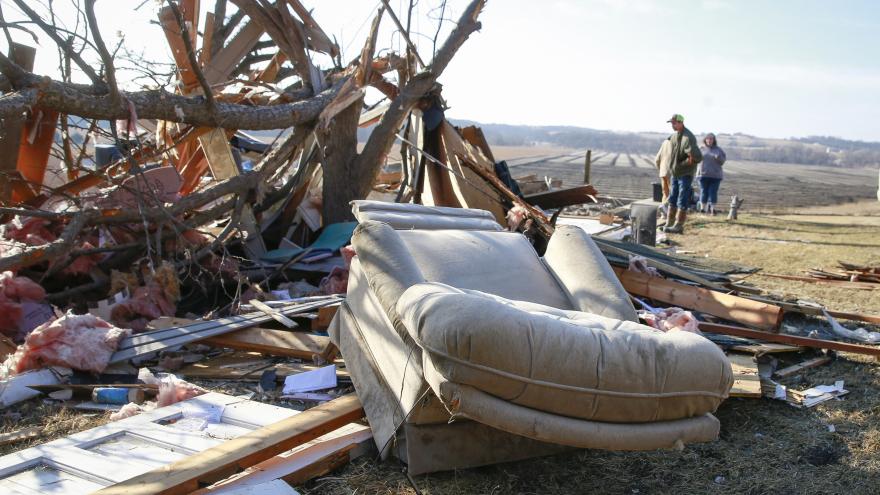 Editor's note: A version of this article originally appeared in the weekly weather newsletter, which releases every Monday. You can sign up here to receive these every week and during significant storms.

(CNN) -- In this day and age, most of us no longer listen for a tornado siren, instead we listen for the screeching noise or buzz of our cellphones when a tornado nears.

Even as meteorologists we rely on apps and notifications to warn us when danger strikes.

Unfortunately, this weekend, those notifications were delayed.

As deadly tornadoes were carving a path through the state of Iowa on Saturday, the residents in harm's way had no idea their warnings were delayed.

The National Weather Service's (NWS) warning system was having technical issues getting warnings to the public, so the NWS office in Des Moines had to scramble to warn the public there were tornadoes.

Deadly tornadoes and a glitch in the warning system

Saturday's severe outbreak was in some ways unusual for the Des Moines area. It is a state which typically gets tornadoes, but ones rated as high as an EF-4 in March is the unusual part.

"We've only had in state history, I believe one EF-4 tornado in March and two or three EF-3s," noted Jim Lee, Meteorologist for the NWS office in Des Moines. "So it has happened before. But it's unusual to have them that strong this early."

As of right now, the region has only preliminary reports of six tornadoes across the state of Iowa.

The number could go up as meteorologists go out and site survey the damage.

One of the tornadoes is believed to be an EF-0, two of them are believed to be EF-1s, two EF-2s and the fifth a possible EF-3. The sixth tornado was an EF-4, that traveled 69.5 miles and was at times 800 yards wide according to the NWS.

In total, there were around 40 reports of tornadoes on Saturday, mostly across Iowa.

All of this was happening while the NWS experienced a technology glitch, impacting their warning system, causing, at times, nearly a ten-minute delay for some warnings to get out.

"Any delays with the receipt of tornado warnings is serious business as seconds count with a fast moving and violent tornado," said Daryl Herzmann, a systems analyst with Iowa State University.

He was watching what was happening in real time and was actively tweeting about the ordeal.

"When the local NWS office issues a tornado warning, that warning text needs to travel over a network to a central clearinghouse within the NWS at DC/College Park, MD to then be disseminated to the world," Herzmann explained in an email to CNN. "This network transmission to the central clearinghouse was suffering from that 3-10 minute latency due to a misconfiguration of a network path, impacting nearly all NWS forecast offices."

He was able to detect the differences by comparing the timestamps in the NWS text and when the product was actually received on his processing software.

It forced the NWS office in Des Moines to scramble to get the valuable information out to the public, so they could get to safety.

With their main source for alerts falling short, they had to make up for it with any and every other type of communication.

"We utilized like our hotline systems to send out the warnings, phone calls and webinars with partners. We always engage the public on social media. We have real-time chat to talk to media," Lee pointed out. "We have experts and backup systems so that we can make sure that we get the best quality warnings out."

They were still able to give around an average 20-minute lead time for people to get to safety, which is impressive.

"I can confirm that warning lead time averaged 20 minutes and some of the warnings were delayed in dissemination," Susan Buchanan, the Weather Service's director of public affairs, told CNN Monday morning.

Most broadcast meteorologists use the instant-messenger type website to get warnings first hand from the NWS offices, then relay them to the public.

But people solely relying on their cellphones to alert them, were late getting the message because of the NWS network latency, including the EF-4 wedge tornado heading straight for the town of Winterset.

"Yes, these delays affected warnings for the Madison County tornado(es)," said Herzmann. "I don't know though if there is a case of somebody not taking action because they did not get a delayed warning."

The root cause of the delay is still unknown.

Read some of the other ways to get warnings other than your cellphone.

As of Monday morning, "our (NWS) engineers are still working to determine the root cause (of the delay)," Buchanan said.

"NWS is plagued with IT-related outages and failures during high impact weather events," Herzmann said. "This particular kind of latency issue only happened once before, during Hurricane Ida."

One day tornadoes, snow the next

Behind the storms this weekend, snow began to fall in the same areas wrecked by tornado damage.

"Today we're gonna have temperatures kind of hovering in the 20s and 30s all day," Lee noted. "On Tuesday, most of will get up into the 40s, but then later this week, it's actually going to get even colder. Thursday and Friday, we're looking at probably highs in the 20s."

For much of the country over the weekend, spring was in the air.

Since it's technically spring (according to meteorologists), it made sense.

But now, we are back to winter this week for much of the country as temperatures take a dive.

How cold will it get in your city this week?

There is a potent storm system bringing the potential for flooding and more severe storms to a large chunk of the eastern half of the country.

Nearly 50 million people are in a Level 2 out of 5 risk for severe storms today, including places like Philadelphia, Baltimore, Washington, Nashville and Atlanta.

The main threat will be damaging winds, however a few tornadoes cannot be ruled out.

Nearly 12 million people are under flood watches today through the Ohio Valley.

Additional rainfall today will fall on places already saturated, which could result in flooding for places like Louisville, Cincinnati and Columbus.

Behind the front, a blast of arctic air will send temperatures into a nose dive.

"Washington, DC set a record high of 78 yesterday and will easily set another record today, topping out in the low 80s," reported CNN meteorologist Dave Hennen. "The strong cold front will drop temperatures by nearly 40 degrees with highs by Wednesday only in the mid-40s in the nation's capital."

The same theme will run true for much of the east, as temperatures fall dramatically behind the front.

Then, a second push of cold air will move in by the end of the week.