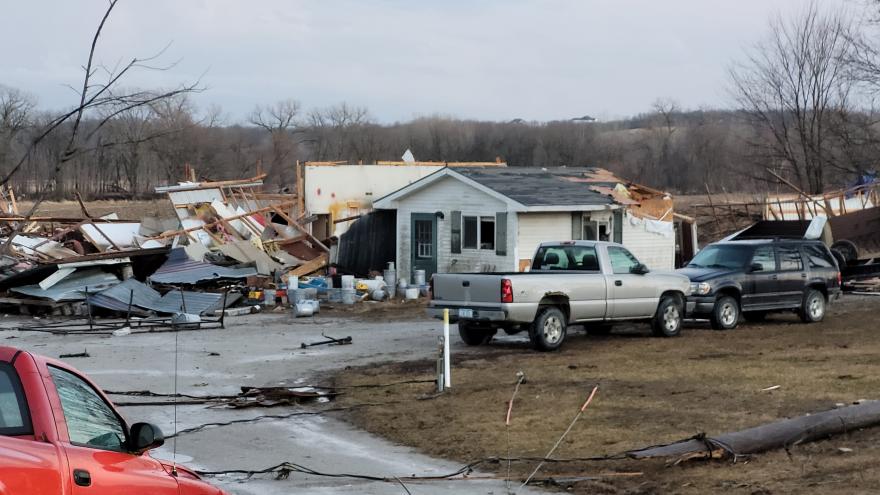 The two children who died were under the age of five, Madison County Emergency Management Director Diogenes Ayala said.

"This is, I think, the worst anyone has seen in quite a long time," Ayala said.

The tornado, which ripped through multiple counties near Des Moines, also left one adult with life-threatening injuries and three others hospitalized in serious condition, Ayala said.

The National Weather Service office in Des Moines said an initial estimate shows it was an EF3 tornado, with wind speeds of at least 136 miles per hour.

"This is a widespread storm," Ayala said. He estimated there was serious damage to more than two dozen homes.

A person in a rural area near the Lucas County city of Chariton was also killed, and multiple people were injured, according to Mike Lamb, Emergency Management Coordinator for Lucas, Appanoose, Davis and Monroe Counties.

The NWS in Des Moines had earlier warned a "large and extremely dangerous storm" was moving toward Pleasant Hill, a city about 5 miles east of Des Moines, and people should seek shelter immediately.

The severe weather caused "damage to several homes, power lines, and trees," the sheriff's office said. First responders were in the area conducting a damage assessment and helping residents.

"Downed power lines, standing water and debris blocking roadways are creating dangerous travel conditions in this area and we are asking for the public's assistance by staying clear of the area and allowing these agencies to work unimpeded," the sheriff's office cautioned in the post.

Iowa Gov. Kim Reynolds issued a disaster proclamation for Madison County, saying she and her husband are praying for the lives claimed and those injured in the tornado.

The proclamation allows state resources to be used for response and recovery efforts in Madison County, according to the news release. Other counties may be added to the proclamation.

"Today, as you pray for the situation in Ukraine, please also pray for the victims of yesterday's deadly tornadoes in Iowa—for those that tragically lost their lives, those injured, and those whose properties suffered severe damage," Gov. Reynolds tweeted Sunday morning.

She and Lt. Gov. Adam Gregg are set to tour the storm damage and hold a news conference Sunday afternoon in Winterset, where six people were killed.

Severe storms were forecast for Iowa, including in Des Moines, Saturday afternoon and evening.

Typically in March, severe weather is focused over the Gulf Coast states, from Texas to Florida. For example, Texas averages 11 tornadoes in March, while Iowa typically only sees two.