Tori Spelling says she's co-sleeping with four of her children 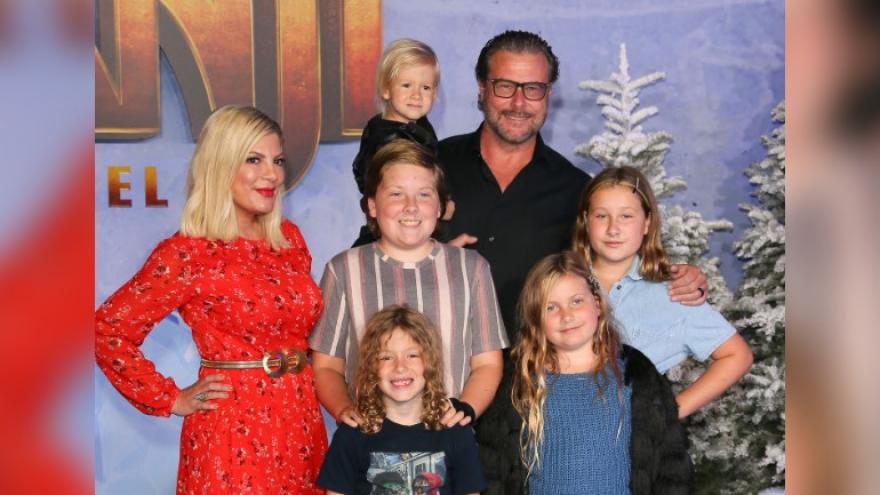 (CNN) -- Tori Spelling is currently co-sleeping with four of her five children.

The former "90210" star discussed her family's bedtime arrangement during an appearance on SiriusXM Radio Andy's "Jeff Lewis Live" on Wednesday, whilst addressing reports that her marriage to Dean McDermott is in trouble.

In 2014, McDermott admitted to cheating on Spelling and they documented the fallout of his infidelity on their TV series "True Tori."

This week, Spelling appeared to confirm that she and her husband are navigating another rough patch in their marriage.

"You know what? Right now, my kids and dogs sleep in my bed," she said.

"So, he's in the guest room," Lewis attempted to clarify. Spelling remained coy, responding, "He's in a room."

According to Spelling, she and McDermott stopped sharing a bed after he left for "another country" to film an unspecified project.

"Since he left -- this is not good, you guys -- but since he left, he was gone for six months filming in another country, they all stayed with me," Spelling explained. "So, I currently still have four in the bedroom with me who have yet to go back to their rooms."

As well as four of her children, from ages 4 to 13, Spelling also said she had three dogs in with her at bedtime.

While it is less common in the West, in some cultures, parents sleep in close proximity to their baby or in the same bed long after weaning.

However, both the UK's NHS and the American Academy of Pediatrics (AAP) strongly recommend against bed-sharing with a baby, with the latter stating that infants "should sleep in the parents' room, close to the parents' bed but on a separate surface (room sharing)."

Although co-sleeping may be contentious, celebrities including Tia Mowry-Hardrict, Angelina Jolie and Gwen Stefani are all advocates. "Clueless" star Alicia Silverstone even devoted an entire chapter of her 2014 book "The Kind Mama" to the practice.

"Sharing a bed with Baby means you can tune in better to her needs, which in turn builds security and trust," she wrote.

In February last year, Spelling said her two eldest children, Liam and Stella, had been victims of bullying at school. In an Instagram post, she said Stella had "endured enough bullying for a lifetime."