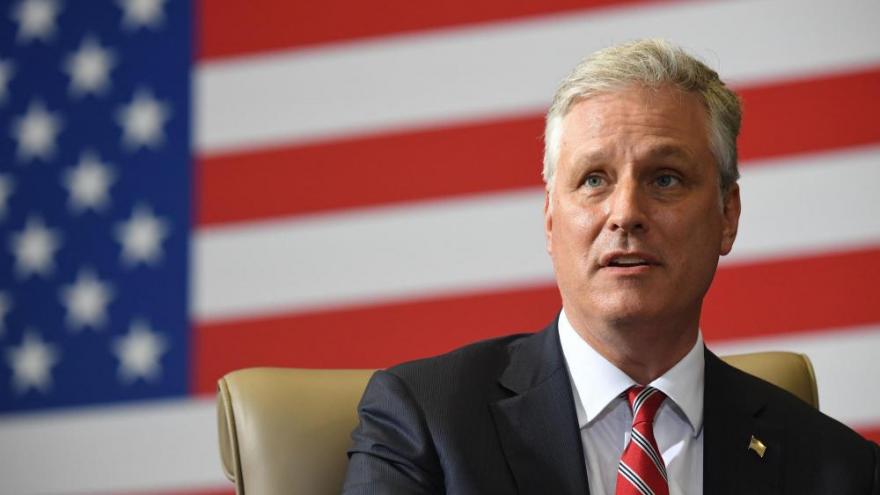 Several of President Donald Trump's top aides -- including national security adviser Robert O'Brien -- are considering resigning. This image shows O'Brien attending a briefing at the US Southern Command in Doral, Florida, on July 10, 2020.

(CNN) -- President Donald Trump's deputy national security adviser Matt Pottinger resigned Wednesday afternoon in response to Trump's reaction to a mob of his supporters breaching the US Capitol, a person close to Pottinger confirms to CNN.

Pottinger told people there was very little for him to consider, the person said. Bloomberg was first to report that Pottinger had resigned.

Several of Trump's top national security aides -- including national security adviser Robert O'Brien -- are considering resigning in the wake of his response to a day of chaos and violence, according to multiple sources familiar with their thinking.

Deputy chief of staff Chris Liddell is also considering resigning, according to the sources.

Earlier Wednesday, O'Brien took the unusual step of defending Vice President Mike Pence, as Trump has been consumed by the vice president's refusal to do his bidding instead of the mob that breached Capitol Hill. O'Brien said Pence showed courage as Trump lambasted him.

"I just spoke with Vice President Pence. He is a genuinely fine and decent man. He exhibited courage today as he did at the Capitol on 9/11 as a Congressman. I am proud to serve with him," O'Brien said

O'Brien, Pottinger and Liddle did not immediately respond to requests for comment.

The President is being lambasted by his own party for his response to the day's events, including egging on his supporters and then justifying their riot in the US Capitol.

Earlier on Wednesday, Trump told a crowd of supporters gathered on the Ellipse near the White House that he planned to march with them to the Capitol building.

"We're going to walk down to the Capitol. And we're gonna cheer on our brave senators and congressmen and women. And we're probably not going to be cheering, so much for some of them, because you'll never take back our country with weakness, you have to show strength and you have to be strong," he said at his rally on the Ellipse.

Ultimately Trump skipped the march, returned to the White House in an armored SUV and hunkered indoors.

In a video posted to social media after the mob overran Capitol Police and entered the country's legislative chambers, Trump sought to empathize with the rioters based on the lies he's spread about a fraudulent election.

"I know your pain. I know you're hurt. We had an election that was stolen from us," Trump said in the video.

"You have to go home now. We have to have peace," Trump said, several hours after the doors of the Capitol building were breached, his own vice president was evacuated and multiple police offers were injured in the mob violence. "We have to have law and order."

Trump, who proved over the past year to be eager to deploy the National Guard when violence broke out in other US cities, initially resisted doing so on Capitol Hill as the mob descended, a person familiar with the matter said.

White House staffers were visibly shaken by Trump's response to the mob breaching Capitol Hill. The President was borderline enthusiastic over the protests and did not want to condemn them, multiple people said.

Trump agreed to record a short video only after multiple staffers and GOP lawmakers lobbied him to make a statement and the President offered praise and understanding for those who had broken past barricades, two people added.

Then a short time later he tweeted defending them. Several senior staffers are stunned by his behavior.

This story and its headline have been updated with news of Matt Pottinger's resignation.