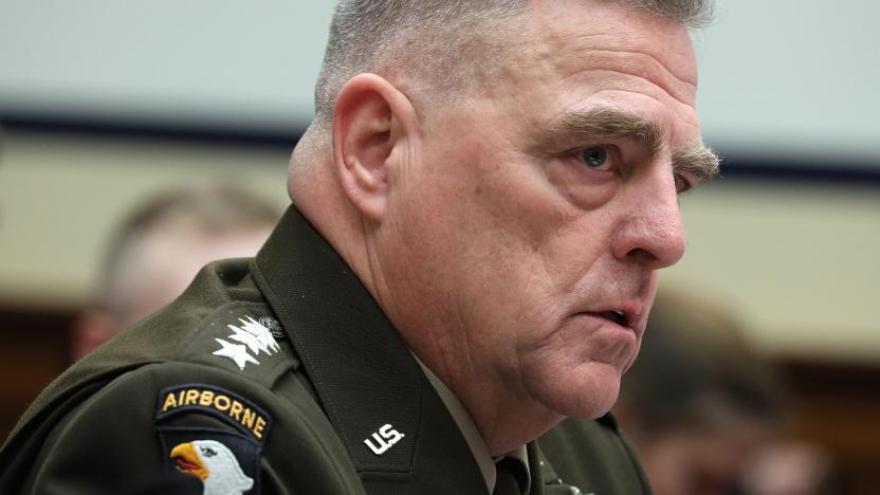 Chairman of the Joint Chiefs of Staff Gen. Mark Milley, told members of Congress that the military will not play a role in the 2020 election. Milley is here testifying before the House Armed Services Committee December 11, 2019 on Capitol Hill in Washington, D.C.

(CNN) -- America's most senior general, Chairman of the Joint Chiefs of Staff Gen. Mark Milley, told members of Congress that the military will not play a role in November's election and won't help settle any disputes if the results are contested.

"The Constitution and laws of the US and the states establish procedures for carrying out elections, and for resolving disputes over the outcome of elections ... I do not see the US military as part of this process," Milley said in a letter released on Friday responding to questions from two members of the House Armed Services Committee.

"In the event of a dispute over some aspect of the elections, by law U.S. courts and the U.S. Congress are required to resolve any disputes, not the U.S. Military," Milley added.

"I believe deeply in the principle of an apolitical U.S. military," Milley wrote.

Milley's answers came in response to questions from Democratic Reps. Elissa Slotkin of Michigan and Mikie Sherrill of New Jersey following a July hearing of the Armed Services Committee.

The Associated Press was first to report Milley's letter.

The idea of having the military get involved in the event that President Donald Trump refused to vacate the office of the presidency after losing the 2020 election was floated by Trump's opponent former Vice President Joe Biden during a June interview on The Daily Show when he was asked what would happen should Trump resist leaving office after an election defeat.

"I promise you, I'm absolutely convinced they will escort him from the White House with great dispatch," Biden said, referring to the US military's Joint Chiefs of Staff.

Other high profile Democrats including the party's 2016 nominee Hillary Clinton have also speculated that Trump might be be unlikely to leave office willingly in the event of disputed election result.

Concern that Trump may not vacate the presidency after losing an election drove two well-known retired military officers, John Nagl and Paul Yingling, to pen an open letter to Milley, calling on him to get involved in resolving a contested aftermath.

"If Donald Trump refuses to leave office at the expiration of his constitutional term, the United States military must remove him by force, and you must give that order," the two retired lieutenant colonels said in their message to America's top military officer, which was published by Defense One.

While both Nagl and Yingling well known in military circles for their writings and scholarship on America's recent conflicts, their advocacy for having the armed forces get involved in settling a disputed election prompted backlash from both the Pentagon and other experts in the field of civilian-military relations.

"We have a Constitution, and our Constitution, which all members of the military have sworn an oath to, provides no role for the US military as arbiter of political or election disputes," chief Pentagon spokesman Jonathan Hoffman said at a news conference earlier this month.

"This issue appears to be born of unserious thought reflecting a fundamental lack of appreciation for the history of our democracy and the civilian-military relationship established under our Constitution," he added, appearing to refer to the arguments made in the open letter written by Nagl and Yingling.

Military has never been involved in a disputed election

While the US has had a history of disputed elections, including the 1876 and 2000 presidential contests, they were settled by civilian authorities and the military has never been involved in any kind of effort to settle an election.

"Because the military is the most trusted institution in American life, when people are scared they trust the military to do the right, the legal, the constitutional, the decent thing, even though it's not their job, even though in this case it would be an extraordinary dangerous precedent for democracy in America," Kori Schake, the director of foreign and defense policy at the American Enterprise Institute, told CNN.

Debate over the military's role comes amid increased concern about the politicization of the US military during the heightened partisan atmosphere of a presidential campaign.

The military's top leadership has also drawn criticism for appearing to be drawn into politically sensitive issues.

Milley himself was criticized for a fatigued-clad appearance in a photograph alongside Trump while the President toured Lafayette Square after law enforcement officers forcibly cleared the area of peaceful protesters.

The general later apologized for that appearance.

Trump has also been accused of politicizing the military by referring to military leadership as "my generals," and using troops to perform controversial domestic missions such as border control and responding to civil disorder resulting from the protests over the death of George Floyd.

While the military has never been involved in settling election disputes, concerns about its politicization are not new. General Leonard Wood unsuccessfully sought the Republican nomination for president in 1920 while still in uniform and General Winfield Scott ran unsuccessfully for president under the Whig party's banner while he was still serving as the head of the US Army.