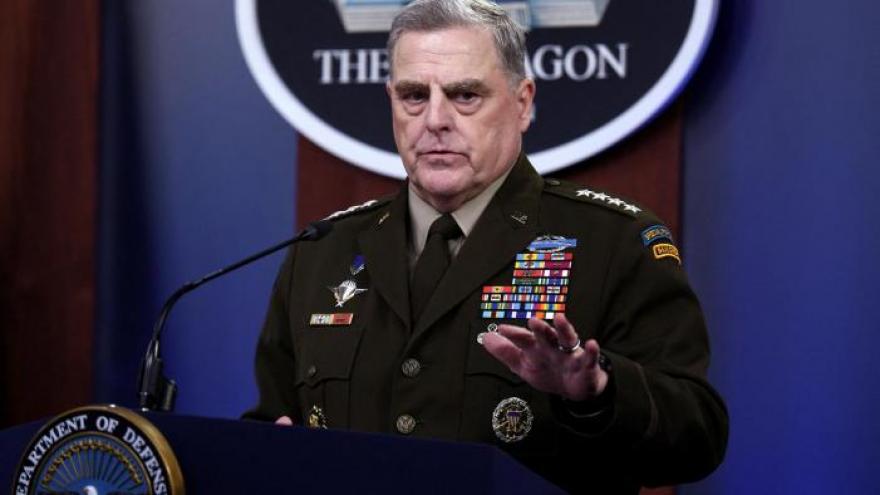 Chairman of the Joint Chiefs of Staff, General Mark Milley is seen at a press conference on July 2 at The Pentagon in Washington, DC.

(CNN) -- Chairman of the Joint Chiefs of Staff Gen. Mark Milley said Sunday in a briefing for Senators that terrorist groups like al Qaeda could reconstitute in Afghanistan sooner than the two years defense officials had previously estimated to Congress because of the recent, rapid Taliban takeover of the country, according to a Senate aide briefed on the comments.

The situation could result in a greater counterterrorism threat, he acknowledged.

Senators were also told there are as many as 60,000 people who could potentially qualify as Special Immigrant Visa holders or applicants, P1 and P2 visa holders, or others like human rights defenders and could need evacuation, two Senate aides said. The White House did not return a request for comment on those numbers.

Axios was first to report on Milley's comments.

The collapse of Afghanistan's government has come as a shock to President Joe Biden and senior members of his administration, who only last month believed it could take months before the civilian government in Kabul fell. There is also concern a Taliban takeover will further the humanitarian crisis in the country and lead to a resurgence of al Qaeda, which promised in April a war "continuing on all other fronts" against the US.

The Biden administration has surged capacity for evacuations, but a key challenge will be whether people can get to Kabul, according to one of the Senate aides, and Secretary of State Antony Blinken said Qatar and a couple of other countries are being helpful in housing people at least temporarily. No agreements have been finalized yet, though, a Democratic member who was briefed told CNN.

The administration officials reiterated that the US is moving the US embassy in Kabul to the Kabul airport and that Department of Defense is ramping up flights to evacuate American citizens and Afghan partners. The officials also said they made it clear they would "respond" to any Taliban attacks on US forces during evacuation.

During a briefing for the House later in the morning, House Minority Leader Kevin McCarthy called the situation in Kabul "the worst outcome possible."

"This is remnants of Vietnam, watching helicopters come off and fly by our embassy right now," he said, according to a GOP source on the call. McCarthy added: "Yes, I have passion, I have anger. ... For everyone who we promised we would protect, how are they ever going to get out of there as of today?"

Blinken repeated that the administration had little option but to withdraw beginning on May 1 because of a deal made by the Trump administration, which would have resulted in resumed attacks by the Taliban on US and coalition forces amid the militant group's nationwide offensive.

Defense Secretary Lloyd Austin said that while the Pentagon had been planning for "a number of potential outcomes," the "lack of resistance that the Taliban faced from Afghan forces has been extremely disconcerting."

"They had all the advantages, they had 20 years of training by our coalition forces, a modern air force, good equipment and weapons," he said, according to sources on the call. "But you can't buy will and you can't purchase leadership. And that's really what was missing in this situation."