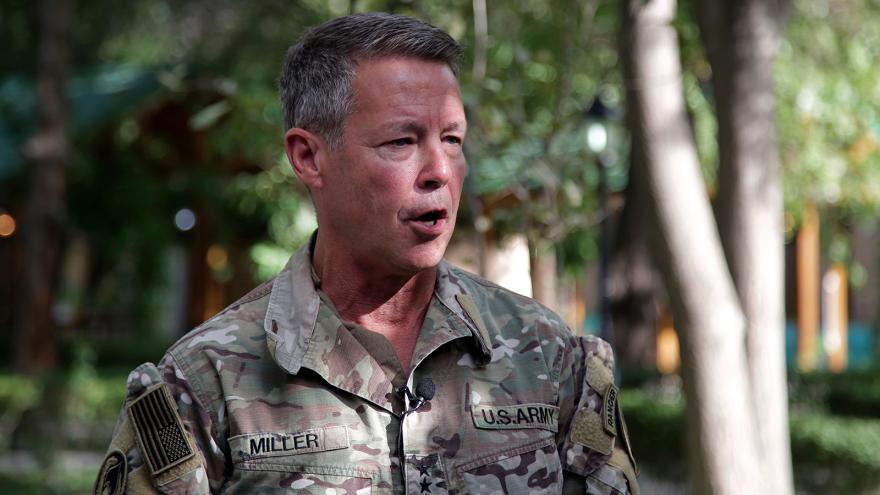 (CNN) -- The top US general in Afghanistan will step down on Monday as the United States' military withdrawal from the country nears completion.

Gen. Austin Scott Miller will transition his command authorities to Gen. Kenneth McKenzie, the leader of US Central Command, in a ceremony in Kabul, according to a US defense official with direct knowledge of the plans.

His transition of command authorities was expected and is a key milestone in the US' military withdrawal from Afghanistan, and comes days after President Joe Biden said that the full drawdown of forces would be complete by the end of August.

Miller, who was the longest-serving US commander throughout America's nearly two decades of military involvement in Afghanistan, has repeatedly voiced concern about the pace of the Taliban's territorial gains and the potential for civil war in the country once the US military campaign is complete.

The Biden administration is also beginning to work with other countries to lay out what the Taliban will get if they engage in a political process in Afghanistan, and what cost they will pay if they do not engage, a senior administration official told CNN Monday.

The effort is part of the new chapter of the US diplomatic engagement in Afghanistan, coming as Biden has decided to pull out all of the US troops in the country. The US is hoping to encourage other countries to become invested in the political future of the country.

US Special Representative for Afghanistan Reconciliation Zalmay Khalilzad will lead this effort and has planned meetings with other countries in the coming weeks to discuss the matter, the State Department announced over the weekend.

"In his travel, Ambassador Khalilzad will continue to engage in determined diplomacy and the pursuit of a peace agreement between the Islamic Republic and the Taliban. As part of the United States' ongoing support of the peace process, he will work with all parties and with regional and international stakeholders to further advance a consensus on a political settlement," the State Department announced. "Political accommodation on the part of all sides remains urgent."

Khalilzad will visit Qatar, Pakistan, and Uzbekistan, the announcement said. He will also meet with officials from Russia, China and European countries, the senior administration official said.

The State Department remains in direct contact with the Taliban, and has not detailed what -- if anything -- would prompt them to cut off that dialogue.

Biden acknowledged last week that the Taliban were now at their strongest since 2001, but added that he trusted "the capacity of the Afghan military, who is better trained, better equipped" than the Taliban.