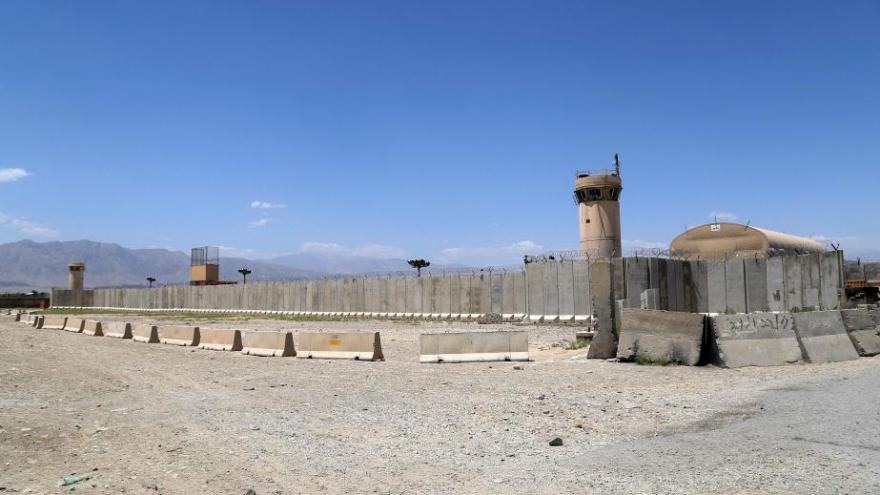 A general view shows Bagram Air Base, after all US and NATO troops left, some 70 Km north of Kabul on July 2, 2021.

(CNN) -- Army Gen. Austin Scott Miller, the top US military official overseeing the withdrawal of troops from Afghanistan, said that there should be concern about the Taliban advances on the ground there.

"We should be concerned. The loss of terrain and the rapidity of that loss of terrain has -- has to be concerning, one, because it's a -- war is physical, but it's also got a psychological or moral component to it. And hope actually matters. And morale actually matters," Miller said in an interview that aired Sunday on ABC's "This Week." "And so, as you watch the Taliban moving across the country, what you don't want to have happen is that the people lose hope and they believe they now have a foregone conclusion presented to them."

The US military is in its final stages of withdrawing troops from Afghanistan, which is expected to be completed soon, bringing an end to America's longest war. CNN reported Friday that the last US troops had left Bagram Air Base, marking the end of the American presence at the sprawling compound that became the center of military power in Afghanistan.

While President Joe Biden is remaining steadfast in his decision to draw down troops by September 11, concerns are rising about the pace of troop withdrawal, the deteriorating security in Afghanistan, and lingering questions about the US' long-term strategy.

Miller expressed his concern about the security situation in Afghanistan and raised the potential of a civil war once US troops are gone, as the Taliban are already moving rapidly to take over districts in the northern parts of the country.

"You look at the security situation, it's not good. The Afghans recognize it's not good. The Taliban are on the move. We're starting to create conditions here that won't look good for Afghanistan in the future if there's a push for a military takeover," he said.

Asked about the future safety of those who supported the US military effort in Afghanistan and will remain in the country, Miller responded, "I don't like leaving friends in need. And I know that my friends are in need."

He did not divulge what his advice was to Biden on the question of whether to withdraw troops.

Texas congressman: 'Biden's going to own these ugly images'

Along with military commanders, members of Congress have also raised concerns about a resurgence of terrorism should the US-backed government in Kabul fall soon after US troops exit the country.

Rep. Michael McCaul, the top Republican on the House Foreign Affairs Committee, on Sunday warned that Biden will be held responsible for the aftermath of the withdrawal from Afghanistan.

"When we fully withdraw, the devastation, and the killings, and women, humanitarian crisis fleeing across border of Pakistan -- President Biden's going to own these ugly images," the Texas Republican said in an interview on "Fox News Sunday."

He criticized the Biden administration for what he called a "lack of planning and preparation" in the troop withdrawal and accused the President of playing politics with the decision to end American's longest war.

"We can debate how long to stay there, but my criticism is the lack of planning and preparation for this. If you fail to plan, you plan to fail," he said.

He expressed concern that Afghanistan could go the way of Iraq, where terrorist extremists were able to gain power in the country once US troops left, then forcing the US to send troops back.

"All the top experts I talk to, that's their greatest fear -- is that he may be doing this for political purposes. But at some point, our vital interests are ISIS and al Qaeda. And we are going to give them a safe haven as the Taliban takes over that nation and that vacuum is going to be filled by terrorists," he said. "And I'm concerned that we will be going back."

He also predicted a "major civil war" in the country and added that he worries about the US embassy in Kabul.

US Embassy in Kabul is 'constantly planning for contingencies'

CNN reported US officials are actively updating emergency evacuation plans for the US embassy in Kabul, as concerns grow about the potential for escalating violence in the country while US troops near a complete withdraw from the country, according to a US official and another source familiar with the planning.

The sources said that the State Department constantly revises emergency plans for US embassies, but the updates in the case of the US embassy in Kabul are more urgent and intense given the changing US military posture and increased Taliban offenses in the country.

A senior defense official with knowledge of the planning process told CNN that the US military is updating its contingency planning for a number of scenarios to evacuate the embassy, contractors and troops if it comes to that, but the official pushed back against any notion that planning has accelerated per se.

The US Embassy Kabul said Sunday in a Twitter thread that it is "aware of security challenges to operating in Afghanistan" and "will adjust our presence as necessary to address these challenges," but that it is "constantly planning for contingencies" and "how to mitigate risks" to its people and programs.

The embassy added that it's "confident that we can conduct our work in a safe manner to the benefit" of Afghanistan and the bilateral relationship," noting that it has "well-developed security plans to safely protect" its personnel and facilities.

"As President Biden and Secretary (Tony) Blinken have said, while the U.S. military presence in Afghanistan is ending, the U.S. Embassy will continue our diplomatic, humanitarian, and security assistance programs in #Afghanistan," it said.

On Sunday, McCaul said he has been "pleading" for the Biden administration to come up with a plan to protect the Afghan translators and interpreters who have helped US troops and may now be targeted by the Taliban. "They just haven't prepared for this at all," he said.

A US official and another source familiar with the discussions told CNN this week that the Biden administration is asking countries in Central Asia to temporarily house thousands of Afghan interpreters and translators while they wait for visas to the United States.